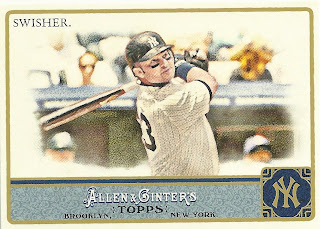 Even Nick Swisher looks cool with the horizontal layout…
Next, card #9 of D-Backs starter Joe Saunders. 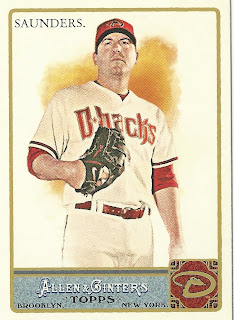 His 8-11 record doesn’t impress, but he has kept his ERA below 4 which ain’t bad… From a mediocre starter to the best this year… Card #275 of Detroit Tigers ACE Justin Verlander. 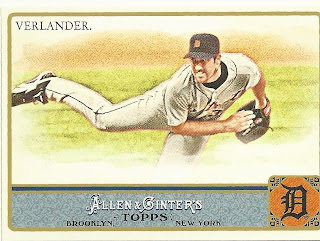 Again, how is this dude not on the favorite player list??? Tim Hudson, Heath Bell, Jon Lester, but no Verlander or Cliff Lee? Come on people! Verlander is 19-5 with 212 strikeouts and a no-hitter and he looks like a lock to win his first Cy Young Award this year, plus the card is another sweet looking horizontal view. Great card, no points… Next up is a glossy-ish insert which will earn me a few points I do believe… IT is card #BHS-25 of Ichiro. 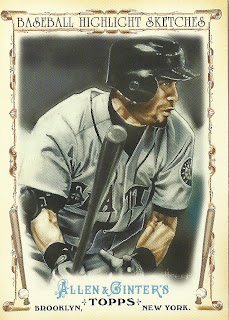 A Baseball Highlights sketch card celebrating Ichiro having 10 straight seasons with 200 or more hits. With ONLY 148 hits so far this year Ichiro is still 10th in the AL in that category, but it looks like his consecutive streak of 200+ hits will end in 2011. This was also the first season (after 10 straight) that Ichiro didn’t make the AL All Star Team. Dude is still a first ballot Hall of Famer and he still has a lot of hits left in his bat, but there is a reason why 10 straight seasons with 200 + hits is so impressive… 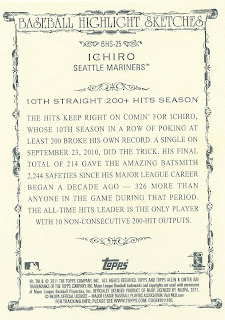 Chalk up an extra 3 points for me for pulling a Sketch card. No bonus for favorite player again… I mean some idiot picked Brian Roberts as their fave, but Ichiro ain’t on the list? Come on people…
My next card is another insert of the full-sized variety. 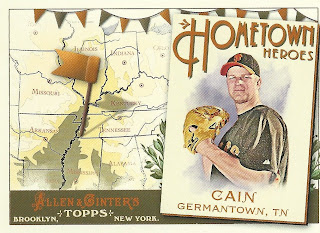 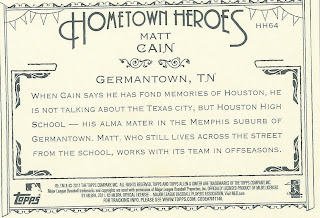 Plus one for me!
My final card is a mini… A Ginter ad back mini to be exact, card #205 of Angel’s first baseman Kendrys Morales… 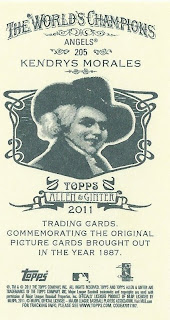 Dude put up MVP type numbers last year. This season, not so much. I do score a point for the Ginter ad back which brings my pack total up to 5 points, minus a point for pulling a Yankee, so 4 points in this one. After 8 packs your friend the Troll has 62 points. Woo hoo!!! I suppose I should get to work now… Look for pack #9 late tonight or early tomorrow… I hope to post my 12th pack (the halfway point) by midnight Sunday. Stay tuned! Go Rays! Troll out.

Posted by Collective Troll at 12:20 AM