I already posted my first 2 packs of 2011 A&G and I am sitting pretty with 12 points… I realized that I skipped the ripping of that big pack that comes on top. So here we go... 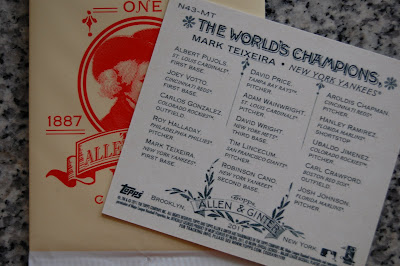 I got a N43 pack and I had high hopes for it, I hoped I would yank a David Price or Carl Crawford or even a David Wright or Roy Halladay that I could trade away AND get some Gint-A-Cuffs points for it. Alas, I pulled a Yankee, and it was the most useless Yankee (other than A-Roid) aka Mark Teixeira. After I take the hit for pulling a Yankee, I come away with 5 points for my N43… 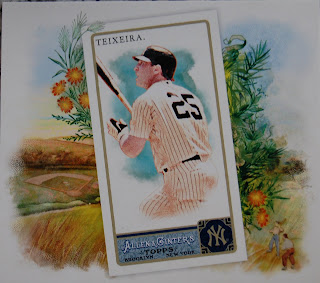 Now onto my 3rd and 4th packs… Perhaps I will do a little better with these.
Here we go! This is what I got:
The first card I got was 2010 World Champion Cody Ross… Not too impressive, BUT it is a shortprint, so I get 2 points, woo hoo! 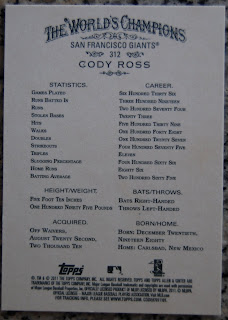 Next up is a whole lot of nothing… Beginning with Ross’ teammate (and former Ray) Aubrey Huff on card #23. No points. 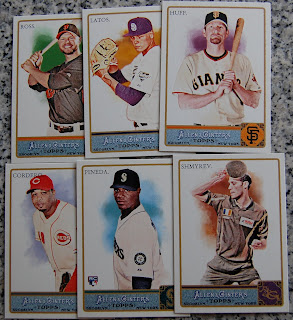 Then we have card #162 of Mat Latos. Meh. Followed by card #52 of pitcher Francisco Cordero. Meh. Next up is card #92 of Mariners super rookie Michael Pineda. This dude is amazing, but not amazing enough to be someone’s favorite player. No points. The last regular card in the pack is card #72 of ping pong champion Maxim Shmyrev. My friend Tong is a HUGE ping pong fan and has never heard of this guy so I am not impressed. Six cards in and I have 2 points from Cody Ross, but wait, there is more! 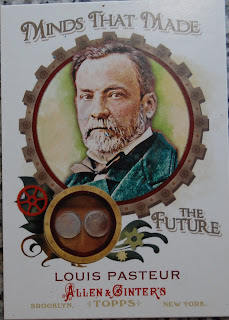 I pulled a Minds That Made the Future card! It was #MMF27 of French microbiologist Louis Pasteur. Very cool and good for 3 points. Nice. I had one more card to go and I got a mini – a mini from the World’s Most Mysterious Figures subset, card #WMF7 of The Man in the Iron Mask, another card good for 3 points. 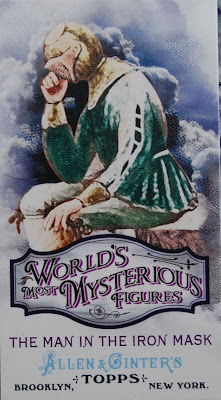 
Pack four is gonna be a GREAT pack, I can feel it! Here we go… I started off with card #283 of A’s first baseman Daric Barton. Dude is a left handed hitting 1st baseman with a .210 batting average and ZERO homeruns. I aint impressed and didn’t bother scanning/photographing it, but the pack gets better…

Beginning with card #223 of Chuck Woolery and look who came with him… Card #105 of Indians pitcher Ubaldo Jimenez (a male figure) and card #299 of super cute boxing champion Ana Julaton (a female figure) so I get a bonus point, woo hoo! 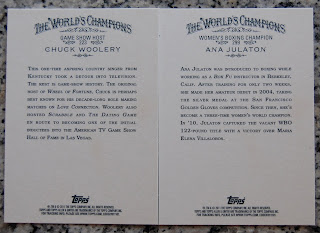 Next up is a Hometown Heroes card, #HH29 of Tigers pitcher Rick Porcello… 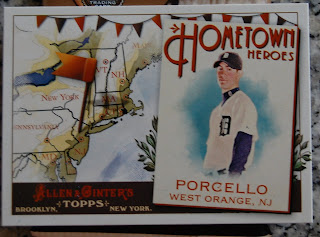 His ERA is a bit high, but this dude is a solid starting pitcher and he is only 22 AND he isn’t a Yankee, SO plus 1 point! The sixth card out of the pack is a little thicker than the rest… Yep, it’s a relic. Card #AGR-CQ of White Sox outfielder Carlos Quentin. Baseball Reference’s Fan EloRater ranks him 1,046th of All Time among hitters. 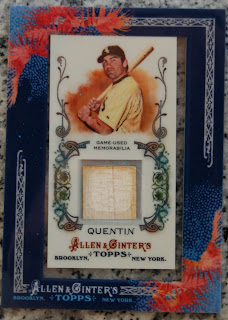 He was an All Star this year. Dude can hit some homeruns and he isn’t a Yankee, so I am not completely disappointed. Plus I get 10 points for it, yay!!! I still have one card left, too. The last card in the pack is a mini, card #94 of the Pirates middle infielder of the future? 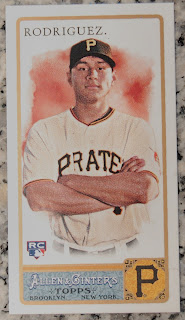 Josh Rodriguez AND it is a Ginter ad back, good for an extra 2 points (crap, forgot to snap the back, gonna have to trust me on this one). That gives me a total of 14 points for this pack!!! Awesome, my best yet!


That leaves me sitting pretty with 39 points and I have yet to pull a card of ANYONE'S favorite player... Oh yeah! EVERYTHING I pulled is up for trade, so get in touch with a Troll. I LOVE Gint-A-Cuffs!!! So glad I joined the party this year. Thanks for reading. Go Rays! Troll out.

Posted by Collective Troll at 11:15 AM