Back again for more high scoring action, Gint-A-Cuffs pack numero cinco (5)…
I have 20 packs left to post and now that I have a scanner I am out of excuses… Only a few minutes before I have to go to work… Here we go:
First off 3 people who don’t play baseball, card # 3 of Notre Dame coach Lou Holtz. Stupid Lou costs me a point. He is followed by card #11 of Iron Chef Marc Forgione…

I should lose a point for pulling a card of a dude with that name who spells it in that manner… Next is card #242 of a lady who dances, Cheryl Burke. Three cards in and I am down a point…
Next up is redemption!!! 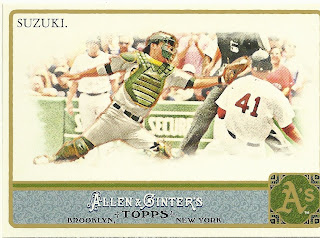 Card #309 of A’s catcher Kurt Suzuki!!! This may be one of my favorite base cards so far. A play at the plate and he is OUT!!! Very nice. Plus 2 cuz he is an SP. Is that John Lackey sliding in? 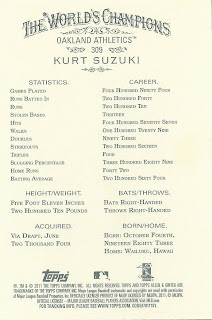 Weird…
Next up is a Hometown Heroes card of David DeJesus. 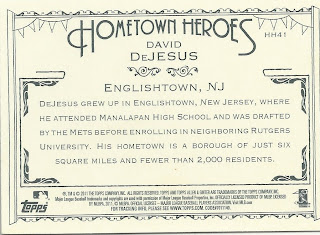 He is from Englishtown, New Jersey which has a big drag (racing, not queens…) strip in it. Big racing town, went there often as a kid. Plus 1 for Hometown Heroes. Plus 2 total for the pack…
My last card is a mini. Card #214 of Rangers shortstop Elvis Andrus. 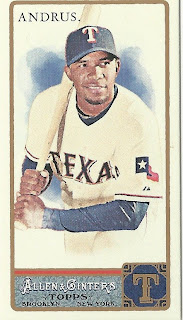 I was hoping he might be PaTP’s fav players, I was hoping, but he went with Josh Hamilton and pulled a bunch of his cards and scored a lot of points. I score nothing for this. Pack 5, 2 points. Gint-A-Cuffs rocks!!! Oh, I had 39 points already after my first 4 packs, so I have upped my total to 41! Assuming I don't get called in to work tomorrow I should be able to post a few more packs... As always EVERYTHING is up for trade... Thanks for reading! Go Rays! Troll out.

Posted by Collective Troll at 2:14 AM