My Dish at the Baseball Card Buffet! 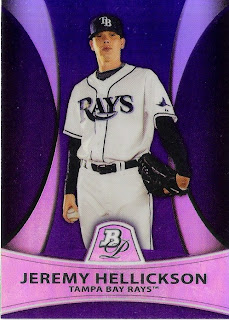 I am putting my new scanner to good use with a GREAT trade that I worked out a few back with the legendary BA Benny’s Baseball Card Buffet. I had posted up some 2011 Topps trade bait and we started going back and forth. It grew into a pretty big trade with me crossing many cards off of my needs list. The more awesome thing is that we already have another trade in the works… Anyway, here are some of the awesome cards that he sent. I tried to pick cards that haven’t been posted to death, plus I really wanted to show how cool he was to hook me up with cards from nearly all of my different collections. Lets start with the first card I have seen from 2010 Bowman Platinum, it’s a purplish refractor of Rays pitcher Jeremy Hellickson, #PP3. Ya gotta consider Hellickson as one of the front runners to be the AL Rookie of the Year, I just hope he sticks around Tampa Bay for a while…
Next up is a card from 1994 Ted Williams featuring AAGPBL All Star Alma Ziegler… 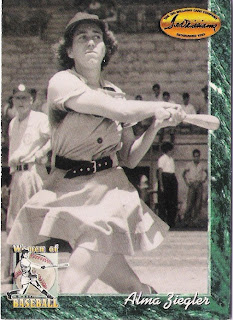 Yes, I collect cards of female baseball players and yes, I did not own this one yet, so it is awesome!
Another great card for my oddball PC is this sweet 1992 Upper Deck card of Danny Tartabull, card #237. 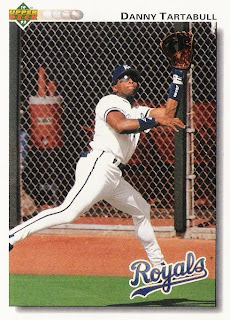 The Bull wasn’t a great defensive outfielder, but I love that this card shows him making him a running catch, or at least running…
Next up is Rays awesomeness from 2011 Topps. Before this trade I had 1 Rays diamond sparkley card (Carlos Pena from Series 1) and no gold cards. Now I have 2 golds and 2 diamonds. It starts with the coolest of the bunch. The Longo sparkle! 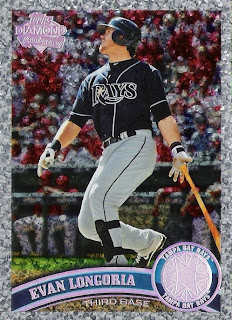 Card #340 of the Rays All Star third baseman. 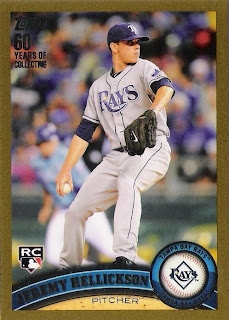 The golds are of the aforementioned Rookie of the Year candidate, Jeremy Hellickson on golden card #165. 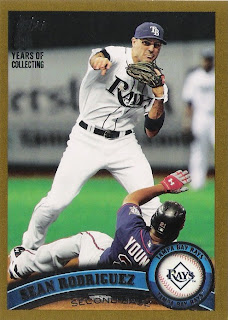 The other gold is a great looking card of the Rays shortstop Sean Rodriguez turning two on Delmon Young and the Twinkies on card #397.
I am going to end this post showing off 2 of my favorites out of the stack of 2011 Topps Series 2 cards he supplied me with… 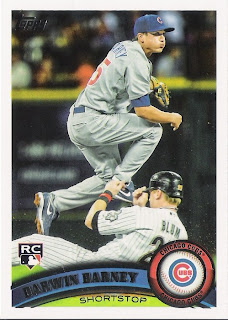 Card #347 of Cubs infielder Darwin Barney and my favorite – 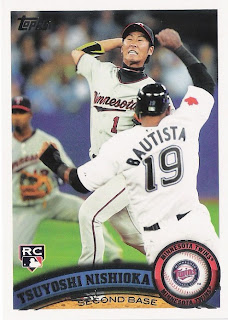 card #501 of Twins middle infielder Tsuyoshi Nishioka putting Jose Bautista out and going for 2. Nishioka hasn’t really impressed in Minnesota yet, but I love the intense game face on this card. A HUGE thanks to Mike from BA Bennys Baseball Card Blog Buffet for hooking me up with these great cards. Thanks brother! Go Rays! Troll out.
Posted by Collective Troll at 12:30 AM