The Gint-A-Cuffs Train Keeps a Rollin'... 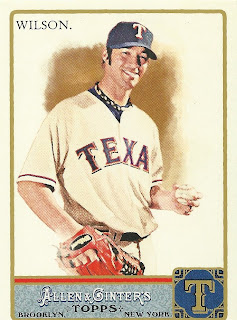 Card #231 of Rangers pitcher CJ Wilson. He is followed by Phillies slugger Ryan Howard on card #65. 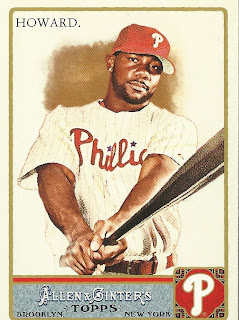 I checked the favorite player list twice for Howard, but that is a negative… 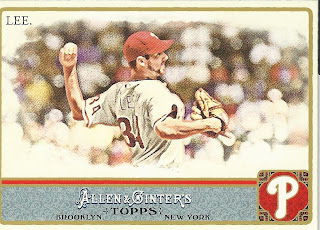 Next up is a sweet horizontal card of Howard’s teammate and 2008 Cy Young Award winner Cliff Lee on card #290. Again, negative on the FP list. Hmm…
Who needs the fav player list when you’re pulling short prints? 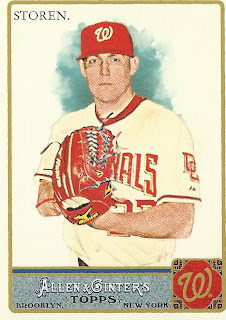 Next up is card #327 of Nationals closer Drew Storen. The 2009 first rounder is having a great year so far with a 6-2 record, 2.77 ERA and 34 saves. Even better is that Storen earns me 2 points for being a short print. 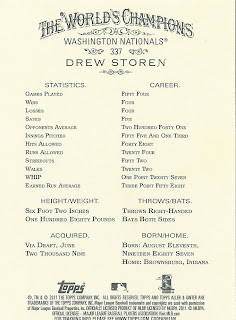 The next card is #241 of New York Mets first baseman and first round pick from 2008, Ike Davis. No points… 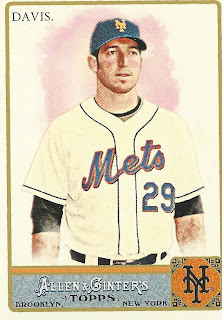 Card #6 in pack #7 is another sweet horizontal card and I have to say I definitely prefer the horizontals in this year’s Ginter. 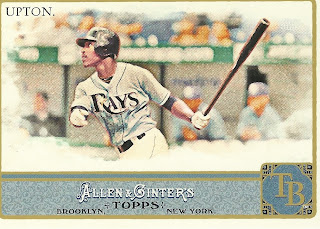 I prefer this cuz it is card #236 of Rays centerfielder BJ Upton. It is the first card I have pulled from my favorite team which earns me a point, plus it is probably the coolest looking A and G Upton card I have seen so far… That brings my point total for this pack up to 3 (and counting!).
Next up is card # HH40 of Brewers first baseman and 2011 MVP candidate Prince Fielder. 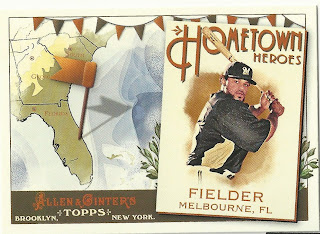 Again, how is this dude not on the fav player list??? Either way I get a point for being a Hometown Heroes card… Prince Fielder is a fellow Floridian. 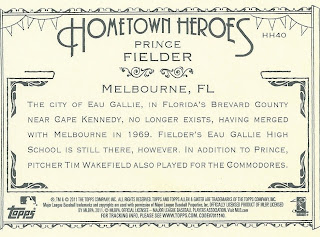 I was born in Broward County, Fielder is from Brevard. He went to the same high school as Tim Wakefield. Cool. Four points so far…
My last card is a little one. A high points, super awesome little one. 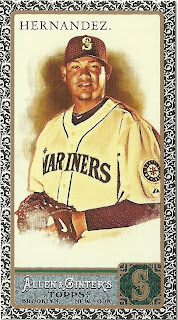 It is card #140 of 2010 Cy Young Award winner King Felix Hernandez AND it is a black bordered mini. That is plus 3 for BB-mini and another plus 3 for pulling a mini from the Favorite Player List. Finally! 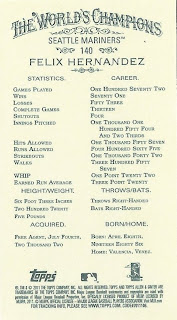 The 6 points for King Felix makes this pack worth 10 points. That brings my grand total up to 58. Not too shabby…
I have 17 more packs to rip and I totally plan on knocking them out quickly. I have a deeper reason. My wife is getting less pleased about the 17 packs of cards sitting all over the house. I don’t wanna put any cards into the binder until I post them. They really need to get these cards put away which means I really need to get them posted…
Aside from BJ, everything is up for trade… More Gint-A-Cuffs fun to come! Go Rays! Troll out.

Posted by Collective Troll at 4:53 PM