Like every other blogger I picked up some 2011 Topps Lineage. It was a new product, there ain’t much going out there in hobby world and I was curious. Well, like pretty much everyone else it was a big fat let down. I did plan on posting the let down and I scanned the whole pack a couple weeks ago, but I was worried that I missed the boat on posting Lineage in a timely fashion, but today I noticed several posts, including this ONE regarding ’11 TL, so I figured the window was still open, plus I really don’t want any of these cards and I can’t trade ‘em if no one knows I have ‘em.

Anyway, my simple review is that these look like a 90’s bargain retail set, like something from Score/Pinnacle family that should be 99 cents a pack. If this product had that price level, I would probably be way into it, but it doesn’t work as a “premium product”. Before I start I need to apologize for the really bad scans. I am still getting used to my new scanner and this was one of my first scanning jobs - anyway, I cropped the hell out of everything, chopped off tops and bottoms and...

Okay, enough yakking, here is my pack. The cards fell into 3 easy categories… First category is the stoopid Yankees.

Got four of them. 1 is pretty cool. How could you not like a card of Lou Gehrig? 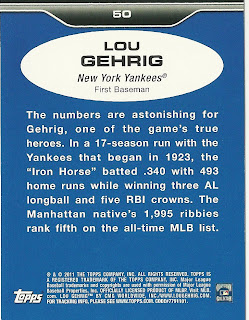 Conversely, it is pretty darn easy to not like cards of Derek Jeter. Also in the lot o’ Yanks is Robby Cano and Andruw Jones. I didn’t even realize AJ was a Yankee. Heck, I didn't realize that he was still in the Big Leagues. Huh…

The next grouping was the Cardinals. I was thinking about sending these directly to Madding from Cards on Cards because it has been far too long since I have sent him a care package, but I started thinking that maybe he had these already, so I thought I would just post them and see what happened.

Among the Cards, like the lot of Yankees, there was one card (Card) I was particularly pleased about pulling.

Getting a card of Hoot, aka Bob Gibson is always awesome… Joining him in this pack is Chris Carpenter, Lance Berkman and a sparkly card of Matt Holliday.

The third grouping in this pack wasn’t of a specific team, rather a position. Yep, these are all speedy young middle infielders… 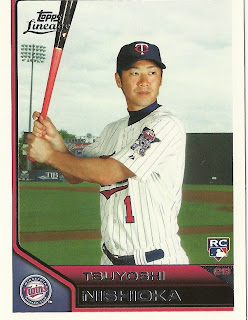 Starting with Twinkies rookie Tsuyoshi Nishioka on card #24. Joining him are Cubs phenom, All Star Starlin Castro on card #136. Castro is leading the NL in hits and looks like the real deal. Unfortunately I forgot to scan his card, oops, bad troll. 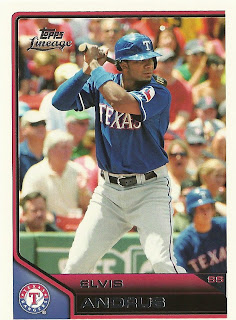 The final card in the shortstop section of my rack pack is card #12 of Texas’ shortstop Elvis Andrus, who is 5th in the AL with 32 steals.

I did have a couple more cards in my 14-card jumbo pack that failed to fall into specific categories… This first one is pretty awesome. Card #192 of the 1959 Rookie of the Year Willie McCovey complete with with a big ol’ Topps All Star rookie trophy. 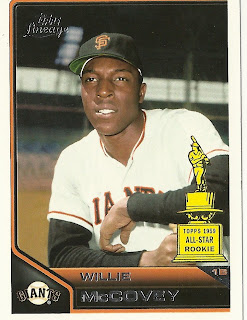 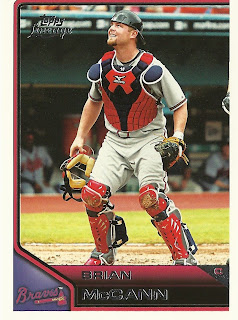 I’ve been told that McCann Can Triple, he can and he has. Twice in 7 seasons, but not since 2009. He has been an All Star for 6 consecutive seasons and he looks like he is looking for something, but what, I don’t know… The last card in the pack is a 2011 Rookies Commemorative Set card of Padres pitcher Corey Luebke. 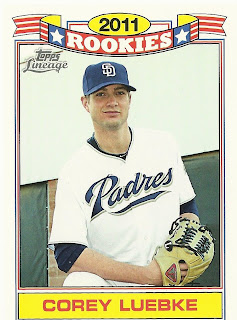 Luebke is 5-6 so far this year, but has a nice low ERA of 2.99 in 99 innings of work. Honestly I was shocked that San Diego didn't deal him at the deadline. This card is number 19 of 20. I thought this insert set was a nice touch, especially getting it in a rack pack, it took me back. 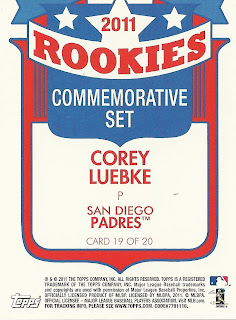 As a kid I always started trying to chase these glossy inserts, but never got far and always gave up.

Anyway, this is my 14-card foray into 2011 Topps Lineage. Had I read the Waxaholic review before I plunked down the 5 bucks for this pack I probably would have spent my money on something else, but then again, I probably still would have given it a spin. I do know that I have no interest in hanging onto ANY of these cards, so if you have any interest in any of them, claim them in the comments and drop a Troll a line… Oh, before I sign off, I know it has been a long time between posts, I am still back and I have a world of stories to share and a number of reasons why I haven’t been a posting fool and I have a number of posts that are sitting in the queue have finished. Look forward to seeing a bunch of ‘em in the week upcoming… Go Rays! Troll out.

Posted by Collective Troll at 12:17 AM