It's High Time For Pack Nine! 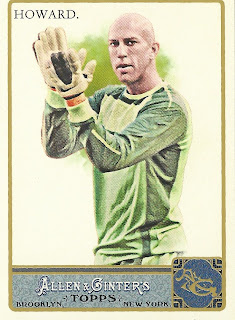 I am posting like its 2009, trying really hard to get my Gint-A-Cuffs packs posted… My wife bought me the sweet binder from the ads that showed up in packs… The binder was way too big to scan and I couldn't locate my camera, so look for a scan of it sometime in the future. I have been told that these binders were a bit pricey, but it is a really nice binder and it was MEGA SWEET of her to get it for me. I bought 50 pages from the LCS yesterday and I am ready to get these posted and put away in the binder.

I had done some trading and got pretty far along on a lot of the mini subsets, but I am just starting to put the base set together and with only 8 packs worth of cards, there are a TON of empty slots in the binder… Anyway, regarding the 2011 Gint-A-Cuffs competition, I have 62 points after my first 8 packs.

Here we go with pack number nine…
Let’s start with card #139 of US men’s soccer goalie Tim Howard. Howard is one of the few soccer players out there that I actually recognize, but if I am pulling soccer players Hope Solo would have been nicer, but…

Next up is card #108 of Philadelphia’s fifth starter Roy Oswalt. The Wizard of Os is the only pitcher on the Phillies staff who has started more than 7 games this year AND has a losing record… Still, for a 23rd round draft pick, dude has turned out a damn nice career. 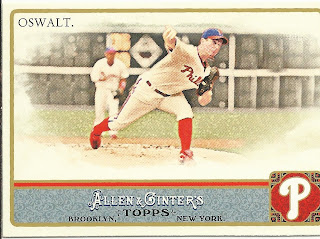 The one thing he is missing is a ring. He was always one of Houston's few brightspots in the postseason, but he only made it to the Series once and it didn't work out so well but the Philadelphia juggernaut might deliver that ring for him in 2011.


The 3rd and 4th cards out of the pack are a couple of no-point-value-cards of guys from the NL Central - card #295 of Cards pitcher Chris Carpenter and #156 of Cubs outfielder Marlon Byrd. 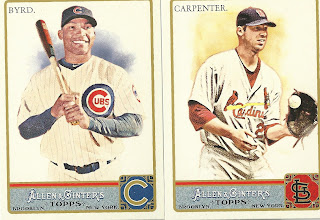 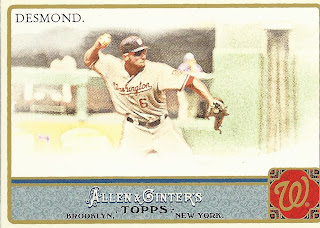 Desmond commits his share of errors and his batting average is a bit low, but I think he has a long career ahead of him. Maybe my glasses are rose colored because he was born, raised and lives in the same town as I work in (Sarasota, FL), but I am a fan of him and dig this horizontal card…

Once I get my Gint-A-Cuffs packs fully posted I intend on doing many more Ginter related posts, including some regarding my Ginter-Mini-Franken-Set. If I get on the ball I can stretch that thing out for an entire year. I am bringing it up because Ian Desmond will definitely need a spot in my Frankenset cuz I gotta rep the locals.


Card #6 was the best so far as after 5 cards I was pointless in this pack. 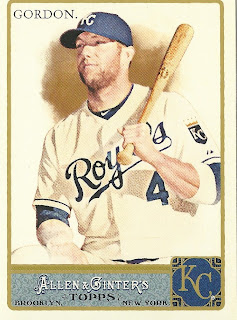 Pointless no longer – I pulled card #329 of the second overall pick in the 2005 draft Alex Gordon. AG is having a good year at the plate and has found his home in the outfield and leads AL outfielders with 20 assists this season. More importantly for me, he is a short print and earns me my first 2 points of this pack. 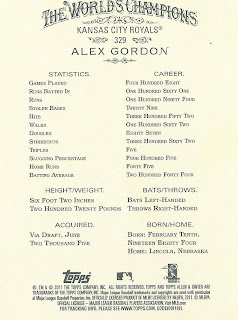 He has improved so much this season, I think next year he has a shot to be on next years Gint-A-Cuffs Fave Player List...


Once I start scoring points I can’t stop… 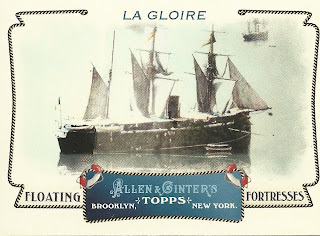 The next card I pulled is #FF12 of La Gloire from the Floating Fortresses insert set. It’s good for 2 more points! 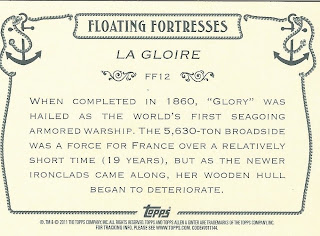 The last card in the pack, yep I actually got the advertised 8 cards in this pack, is a MINI! From the Step Right Up insert set it is card #SRU2 featuring Fire Breathing. 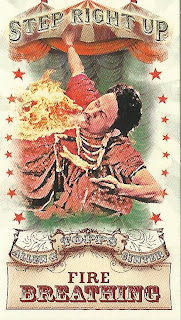 From the first card I saw I fell in love with this set. I really love side shows and carnival art and I have actually finished the 10 card set, so this is a dupe for me. I should mention, although it has been years since I have done it, I have done fire breathing and fire swallowing without lighting my hair on fire... Maybe someday I will try it again cuz it's pretty cool. 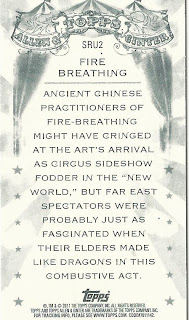 I am happy, but it was somehow anticlimactic. Always is. Anyway, the card is good for an extra 3 points AND it is available for trade. It brings my pack total up to 7 points.

Not spectacular, but it keeps me in the game. I have the next 3 packs scanned already, so stay tuned for more Gint-A-Cuffs fun and games… Oh, my total has jumped to 69 points!!! Yay! Pack #10 will be coming in a matter of hours. Who knows if I will bother to get some sleep tonight? I have a ton to do tomorrow before I go to work and I want to keep on posting. Where is the coffee? Go Rays! Troll out.

Posted by Collective Troll at 1:04 PM