I am Super Collector!!!!

Super collector… That is what I wanna be. Maybe I have been spending too much time reading Wax Heaven, maybe I am terribly jealous of Mario’s incredible Andrew Miller collection. Maybe, reading about his Canseco collection brought me back to my youth when I was an obsessed player collector. Starting around 1986 or ’87, I somehow developed a connection with then Mariners second baseman, Danny Tartabull. I had started making my mother take me to card shows in 1984 while I was trying to finish my awesome hand-collated, 792 card set. When I got the last card I needed for that set, I felt emptiness. I was still working on the ’84 set while 1985 Topps was on the shelves, so I missed out on that. I couldn’t afford to be a part of that set anyway, collectors were scooping up all of the retail product and card shop prices for packs were way out of my range. 1985 Topps was full of hot rookies like Eric Davis, Mark Langston, Kirby Puckett, Roger Clemens, Doc Gooden,

Jimmy Key, Orel Hershiser and Brett Saberhagen. This was the hottest thing going, so I decided to find an alternative. While all of my friends were obsessed with the heroes of the tri-state area, like Don Mattingly, Doc Gooden and Darryl Strawberry, I decided to find a more remote prospect to adulate. Midway through the 1986 season, I made my choice. The Mariners had a very solid team that year. Guys like Phil Bradley, Alvin Davis, Spike Owen, Mark Langston and a young 2nd baseman with a lot of power named Danny Tartabull. Tartabull was moved to left field partway through the season and finished the year with 26 homers. He was my new favorite player. My parents somehow found me a number 4, Mariners jersey and I began scouring anywhere baseball cards could be found for his cards. In ’85 his rookie cards where in the Donruss set and fleer had him on a horizontal, duel-rookie card with Steve Kiefer of the A’s. Topps didn’t get on the “Bull” bandwagon until their 1986 Traded set, same on you Topps!
I wheeled and dealed for as many copies I could get my grubby little hands on. In the mid-eighties there were no inserts or subsets. You were lucky if your favorite player had 3 different cards each year.

You had the hope of tracking down oddball stuff, SGAs, minor league cards, postcards and magazine appearances, but that was about it. You showed your dedication to that player by having a ton of their cards. I remember the sense of accomplishment I got when I was able to fill all nine spaces of a page with one card.

Sometime around 1988, after the “Bull” had been traded away to the Royals, I talked my father into writing a check for me so I could place an ad in the back of Sports Collectors Digest. I proclaimed myself Danny Tartabull’s #1 fan and no one ever disputed it. I started getting cards in the mail, lists from other collectors wanting to trade for their favorite player, it was heaven!!!

I think this was what made me truly fall in love with card collecting. I hit one-thousand cards in my Tartabull binder around 1990. I had a game-used bat, a few autographed baseballs, a signed 8X10, team issued postcards, minor league cards and I even tracked down all of his father, Jose Tartabull’s cards.

I was a super-collector!!! I still have almost all of the cards today. When I hit 1,000, I did so with only 31 different cards and I wouldn’t have had that many if not for Score, Upper Deck and Sportsflics all popping up. It wasn’t too long after hitting the one-thousand mark in my collection that I stopped it. Tartabull wasn’t as exciting to watch and I was a teenager who rather spend his weekend’s chasing girls than wandering around at card shows, so I packed away the

Danilo Tartabull book for a while. I didn’t think about cards too much until 1995 when I saw a pack of Topps Finest.

I bought a pack, then a box, I was hooked again! 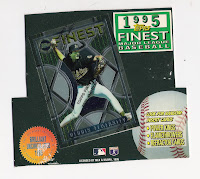 The girl chasing was fun, but then I caught one, a bad one. I realized that my cards always made me happier than she ever had, so I was back! The next year the White Sox signed Tartabull and he had a career year at age 33. I finally met him that year in spring training and went to see the White Sox play at the Trop against the Devil Rays. I never really got back into collecting “Bull” again; I did start collecting White Sox cards. I have the majority of them packed up and ready to find a new home with the guy from the awesome White Sox cards blog. I still do find myself bidding on

Harold Baines cards, still. It is an addiction!
Yes, and reading about Mario’s Canseco collection made me make the trip to my parents attic to dust off the old Tartabull binder and relive some old memories and think of all the similarities between “Bull” and Canseco. They were both rookies in 1986. Canseco won the AL ROY that year, Tartabull finished 5th in the voting. They were both of Cuban descent. They both had family that also played pro ball. They both hit a lot of the home runs in the 80’s and both struck out a lot! Canseco topped 100 RBIs six times, Tartabull 5. Canseco hit more than 20 long balls twelve times, Tartabull did it 7 times. Tartabull managed 100 walks once in his career; Canseco was never quite that patient. They both rank in the top 100 all time in At bats per homeruns and strike outs. They both were at the top of the early 90’s salary explosions; they were both limited in their careers by injuries. They were also both over looked by Topps until the 1986 Traded set came out. Canseco’s career lasted longer and his career home run total is nearly double Tartabull’s, but I still don’t think it’s a stretch to call them similar.
Another similarity is they both retired before the innovation of game-used card inserts and 50 different card products each year. Like Mario began collecting Andrew Miller to get in on the high-end inserts, I have decided on a modern player to become the new focus of my dreams of being a super collector…
First, I am a Tampa Bay Rays fan. Even though I went to the Trop to see the White Sox play, I was always cheering for the Rays. They are my home team and win or lose, I love them! Up until last year, I was buying high end cards of the Rays, cheap, on e-bay.

My favorite is a SPx Winning Trios jersey card with BJ Upton, Carl Crawford and James Shields on it, awesome! Fortunately, the rest of the world is realizing what a great team we have here in St. Pete, but the downside is you can’t buy a card with those 3 guys on it for 3 dollars anymore. My current financial status prohibits me from chasing the whole team, I need a specific focus. Crawford, Upton and Shields are all out of the question because they simply have too many cards and I have too little money. I pondered the idea all day. My favorite Rays are Carl Crawford, Jason Bartlett and James Shields. I had a pretty good idea of who I was gonna pick for my focus, but I figured I would consult with my beautiful wife. We’re hanging out in bed one night and I say “baby, I wanna be a super collector, who should I collect?” I know what you all are thinking… You talk about baseball cards in bed? Yes, we do. I have stated in before, but I do have the most awesome wife in the world. Anyway, her response was quick. “You should collect Bartlett, he’s your favorite.” Excellent! 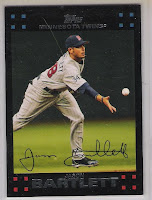 We were in agreement and I had a mission! The next day, I began to scour e-bay looking for high end Bartlett cards. There were quite a few. Unfortunately, he is in a Twins uniform in most of them.

More unfortunately, he’s hitting .375 and already topped his career best total in home runs, he’s having a banner year, which is awesome, but it precludes me from scooping all of his cards at “sleeper” prices. I found quite a few cards, most of them from 2007 and I am “watching” them all, about 20 cards. I already found his “white whale” card, 2007 Triple Threads 1 of 1. Wow! That could be the cornerstone of my new collection!!! I bid on it immediately, ready to blow my entire PayPal account on it. Sadly, that account only has 14 bucks in it and I was swiftly outbid. It’s at about 25 bucks with a few days left to go. Shucks! I guess I am not as ready to be a super collector as I thought. I did find some cool cards with higher serial numbers and I am still sticking to the plan. It’s a new day and this day will bring me yet another new name, I am Jason Bartlett Super Collector!!!!
Go Rays!!!
Posted by Collective Troll at 2:58 PM