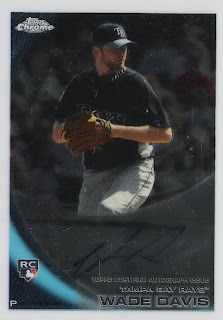 I check my Post Office box every single day on the way to work. Some days the box is empty, but others it is overflowing with goodies. Last Tuesday was one of these days. I had 5 fat envelopes crammed into my small PO Box. The interesting thing was several of these packages had been stuck in the postal system for a REALLY long time.

There was a package from my buddy in South Florida, Wicked Ortega from the My Past Time…I Love It! Blog with a post mark from early August.

I generally don’t look at postmarks, but what triggered me was a package from an unknown sender that wasn’t addressed to Troll. I hadn’t bought anything online or traded with anyone new, so all the envelopes were from familiar senders except this one. I tore it open first and found this 2010 Topps Chrome autograph of my favorite Rays rookie Wade Davis.

I had bought this card from an eBay seller in late September when the product first dropped. I was searching around for the card late one night after work and found a BIN or Best Offer card. I made an offer, a really low offer, just for fun and the next morning I had an invoice for the card in my inbox. I didn’t really want to buy the card – actually I did, but I really couldn’t afford it, I couldn’t afford to be buying anything that week, but I did make an offer, it was accepted and I was on the hook to pay for it. Anyway, I “wrote” an e-check to pay for it and checked my PO Box in anticipation of the new card for the next 2 weeks with no success.

Finally I wrote a “hey WTF” letter to the seller. The seller actually turned out to be really nice and cool about the situation. He said he sent the card out the day I paid for it and he had a tracking code for the package. That was pretty cool of him considering I had only paid 5 bucks for the card including shipping and the asking price was $9.99 plus shipping. Anyway, he tracked the package down-it got stuck in his home post office and he couldn’t get an answer as to why. He offered to refund my money and said if the card arrived I could keep it as bonus. Sweet! I was happier to get my money back; I left him good feedback and forgot about the card. I tried using the 5 bucks to buy a different Wade Davis auto, but got outbid every time.
Anyway, 2 months after I dropped 5 bucks I didn’t have on this on-card autograph of Lake Wales native Wade Davis, it showed up in the mail.

What made it even cooler was that the seller had included a couple of 2010 Topps cards of Davis as freebies along with the card I “bought” which ended up being a freebie too. Yeah, getting an on-card auto of my favorite Rays pitcher for free is freaking awesome! On the negative side, looking at the card it ain’t that great and the autograph looked nowhere near as good as the photo in the auction. Same card yes, but a far weaker looking autograph.

So, that was the reason that I started looking at postmarks and that one took 2 months to make it to Bradentucky. The package from my homie Wicked Ortega was lost in transit even longer. It spent 3 and a half months hovering in postal purgatory. This package was a total surprise to me. Wicked never mentioned sending it to me, so I had no idea it was lost. Either way I am psyched that it showed up. He sent a 2007 Topps Tampa Bay Devil Rays retail team set along with 2 autographs.

Before I show the sweet autographs I have to send out a LONG overdue and HUGE thank you to my buddy Wicked! I am going to show the 2 autographs that were in this surprise package now, but I still owe you my readers a Wicked Week of posting to show off all of the unposted autographs and cards that I have got from Wicked this past year, there are a LOT of sweet autos he has shared with me and SOMEDAY I will actually post them.

Okay, here are the two autographs liberated from the Dead Letter Office. 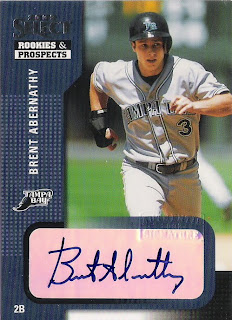 He sent a Select Rookies and Stars autograph of Brent Abernathy. BA was the Devil Rays starting second baseman for the 2002 season, had a decent year, but was taken off the waiver wire by the Royals in April of 2003 and he never found a regular job in the Majors again. 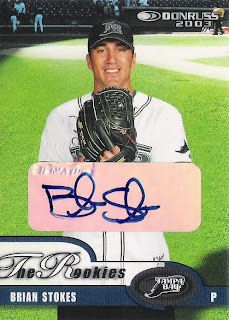 Next is a 2003 Donruss The Rookies autograph of prospect Brian Stokes. In 2003 the D-Rays were awful and Stokes was coming off a 10-7 season in A ball and represented hope for the pitching staff. Stokes wouldn’t see Tampa Bay until 2006 when he came up as a rookie starter, he moved to the pen in ’07 and moved to New York after that. He was since moved to the Los Angeles Angels and hopefully will have a shot to stay in the Big Leagues in 2011. He is one of those players that I am surprised doesn’t sign TTM. Relief pitchers are generally pretty good about keeping up with their mail. Thanks to Wicked, I don’t need to waste ANOTHER stamp on him…

Okay, now I mentioned that I had received 5 packages that day. Funny thing (awesome thing) is all 5 packages included autographs in them. One came from The Great Orioles Autograph Project which will get its own post because he sent a bunch of autographed cards - the 5th package will remain a mystery for now, but I will show off a one card surprise treat from Zack of the Autographed Cards blog. He included a note saying that I needed to get my Rays autograph list online again because it made it a lot easier to surprise me with an auto that I needed. I am working on getting the list together again and will hopefully have one online again soon. 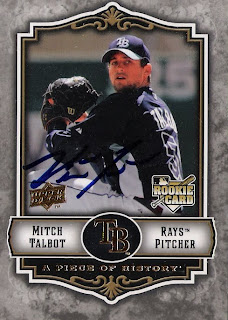 The card that Zack sent WAS in fact one that I needed. He sent along an in-person autograph from former Rays pitcher Mitch Talbot which looks great! Talbot was a 13 game winner in AAA with the Durham Bulls in both 2007 and '08 and earned himself a call up with the Rays in 2008. He spent all of 2009 in the minors before being traded to Cleveland as part of the Kelly Shoppach deal. Talbot won 10 games for the Tribe and I think they got the better end of the deal. Either way I am glad that Talbot is in the big leagues and I am thrilled to scratch him off of my autographs need list.

A HUGE thank you to everyone who made my day and my week with their generosity! Thanks Wicked, thanks Zack! Thanks Ryan! Thanks everyone! Go Rays! Troll out.

Posted by Collective Troll at 8:43 AM