EDITORS NOTE: (This post was originally part 2, it was written a month ago but I couldn't find the card to scan. Since this was written Navarro's bat had been ice cold and he was demoted to Triple A Durham. Thus far in three games Navi has a homer and 2 RBI. I also added a couple of sweet 2010 Topps Series 2 cards to the post. Yes, one is a gold parallel and the other is a black printing plate ONE of ONE! Get your bat right and hurry back for the playoffs Navi!!!) 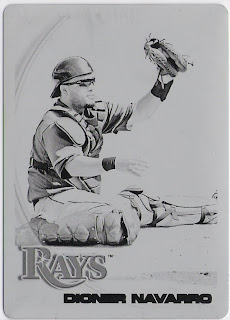 The Tampa Bay Rays sent three players to the All Star Game in 2008. One of them was catcher Dioner Navarro. Navarro entered the game in the bottom of the 7th inning as a pinch hitter for Jason Varitek. Of course the 2008 All Star Game lasted 15 innings and Navarro was the last available catcher for the American League squad. He caught the rest of the game, handling 10 AL pitchers and going to the plate 5 times. In the top of the 15th inning Navarro caught for his teammate Scott Kazmir who pitched a scoreless inning. In the bottom of the 15th inning Navarro came up with one out and Justin Morneau on 1st base. 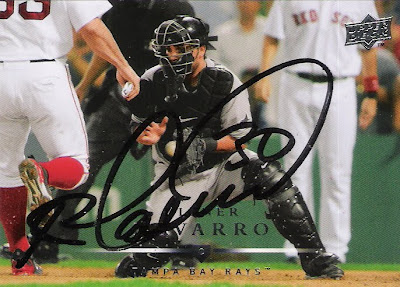 Navarro singled to put Morneau into scoring position. JD Drew walked to load the bases and the game ended when Michael Young hit a deep pop-up off of Brad Lidge which scored Morneau. The American League won the game 4-3 in 15 innings. Kazmir was the winning pitcher and the game ended with all 3 Tampa Bay All Stars still in the game. Navarro finished the game 1-4 with a walk, 9 put-outs and 1 caught stealing. This was the first real national exposure that Navarro had received prior to the playoffs. In the ALDS Navarro hit .400 with 3 doubles and 3 RBI. He cooled off in the ALCS, but his hot hitting returned in the 2008 World Series. He was the Rays leading hitter with a .353 WS batting average. 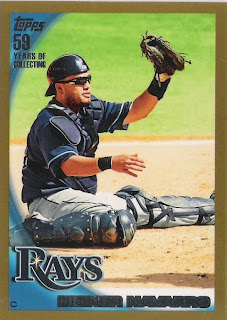 Of course the Rays lost to the Phillies in 5 games. Navarro remains the Rays starting catcher. His batting average is hovering around the Mendoza line this year and he is serving a two-game suspension, but history says that his bat WILL wake up. I am lucky to own a few certified autos of Navi, but now can add this 2009 Upper Deck card of Navi as a Ray in a play at the plate against the Red Sox. I think he is outta here! I love this hobby! Go Rays! Beat the Yankees! Troll out.
Posted by Collective Troll at 3:09 PM