Its A Wicked World! 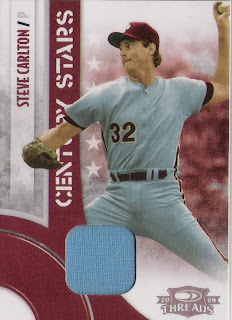 Today is day number one of Wicked Week and I only have a moment to post. There is so much to write and so much to explain. It all started with this post back in August of last year. I had just been bite by the Allen and Ginter bug and ripped my first box. I was a bit let down with the hits in the box. No autographs and just 2 relics, both Tigers. I was left with a Magglio Ordonez jersey and a Dontrelle Willis pants relic. Naturally they were up for trade and I posted them up. I didn't get any takers right away and after a few days I decided that the D-Train pants relic would be the start of a new collection for me. Before the Devil Rays I was a Marlins fan and I really liked Dontrelle. He wasn't at a good spot in his career and his cards were plentiful, so after some thought I announced to the blog-o-sphere that I was going to be a D-Train collector. It was that magical post that led me to "meet" the Wicked One in South Florida, Wicked Ortega of the My Past Time...I Love It! blog. Since that post nearly a year ago, a great friendship was born. Earlier today Wicked (also known as Alfredo) called me to tell me about a David Price auto he had found. Anyway, it all started with Dontrelle's pants, but turned into a lasting friendship that has yielded many trades and has shifted 100s of baseball cards from North to South Florida. This week I am going to catch up on the all goodies Alfedo has sent me which have slipped by unposted. Naturally I don't have the time today, but I wanted to tease the things to come. 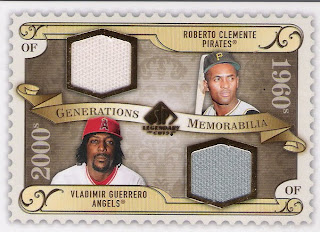 Alfredo has a great philosophy when it comes to cards, he "pays it forward" and many have of you reading this have felt his generosity. The header of this blog for this week is a card from 2009 SP Legendary Cuts of Roberto Clemente and Vlad Guerrero. 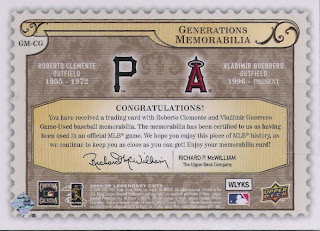 Wicked sent it with this written on the toploader "You gotta love this one, as soon as I saw this I thought Troll". 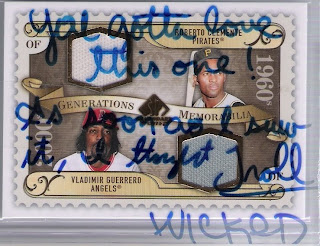 Many cards have made him think Troll and my collection is all the better for it. This week I will formerly thank my friend and fellow blogger and show all the goodies off to the world in the process. Aside from the Clemente relic you can check out my first Steve Carlton jersey relic and a green dandy of Satchel Paige. 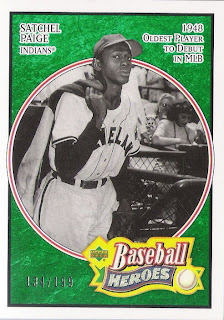 MUCH MORE TO COME IN THIS WICKED WEEK! There will be Rays a plenty, vintage, Negro League, Larry Doby, Danny Tartabull, Clemente, Steve Carlton, autos, relics and more! Its a special week on his blog as well. There is a contest brewing with tons of Hall of Fame autographs and amazing stuff up for grabs, so check it out. Go Rays! Troll out.
Posted by Collective Troll at 2:34 PM