Happy 4th of July to all and welcome to part 9 in an ongoing series showcasing on-card autographs of all of the members of the 2008 American League Pennant winning Tampa Bay Rays. Willy Aybar came to the Rays right before spring training in 2008 via a trade with the Atlanta Braves. Willy made an immediate impact playing in 95 games and filling the role of super utility infielder. He logged time at all 4 infield positions as well as designated hitter. He was the replacement for both Evan Longoria and Carlos Pena when they missed time with injuries. 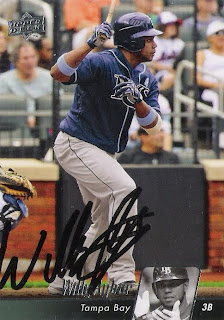 Willy batted .253 with 10 homers and 33 RBI in his first season in Tampa Bay. In the playoffs he caught fire, particularly in the ALCS, but overall he batted .353 with 2 homers and 7 RBI in the postseason. Aybar battled some injuries early this season, but after the release of Pat Burrell he found himself an everyday player. He can still fill in anywhere in the infield, but he is now the team’s main designated hitter. Over the last 7 games Aybar is batting .333 with a homer and 7 RBI. He produced a game winning homer last week and on Thursday he provided a walk-off RBI single in the 10th inning against the Twins. I have yet to find a certified autograph of Willy Aybar, but I am happy with this on-card, in person signed 2010 Upper Deck card. Go Rays! Troll out.
Posted by Collective Troll at 9:36 AM