At The End of the Rainbow AKA PC MISSION ACCOMPLISHED

I don't know why, but if I get a card of one of my favorite players and I learn that there other versions of the SAME card available in other colors-I WANT THEM! I have become obsessed with Topps Parallels. It started with the GOLD cards and now I am craving the black versions. Platinum cards of Carl Crawford are still just legend to me, but someday I hope to see and own one of them. It is the platinum 1/1 cards that have kept me from completing the Topps rainbow for any Carl Crawford cards. With only one copy of each card they just don't pop up often. I think there are only 3 different 2010 Topps Platinum cards on eBay right now. The series 2 Nick Markakis is up for bid right now if anyone is interested... 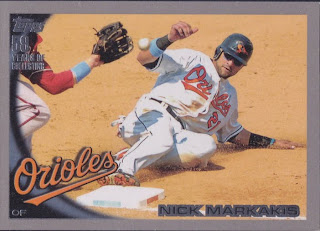 I should get back on track though. This post isn't about Nick Markakis, Topps Baseball nor my inability to finish a Topps rainbow parallel, this post is about Carl Crawford and 2010 Bowman and my ability to fulfill that rainbow.

Yep, I did it. It was one of my collecting goals for 2010 and I achieved it and I can say that I am the only Crawford collector to do it. I am probably the only one who wanted to, but still... It all started with the black (base) version that came in a trade when Bowman first broke. I got the orange version a few weeks later in a trade. The next two were purchased from a reader and the final card was an eBay purchase. The gold one ended up being the last one I found and that came in the mail on Monday. I have been itching to post them all ever since. I really don't know what to write about them other than that as an obsessive completest player collector I feel pretty happy right now... Check em out, that is CC safe at home in Miami with a black border, 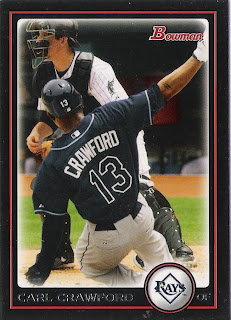 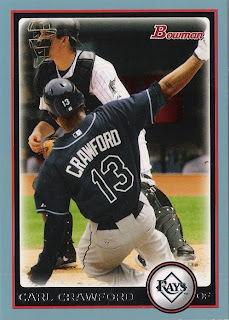 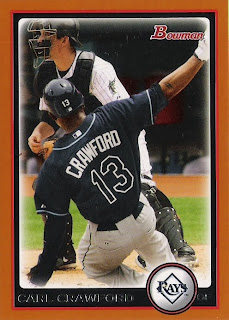 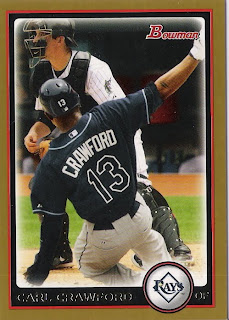 and finally a RED BORDER! 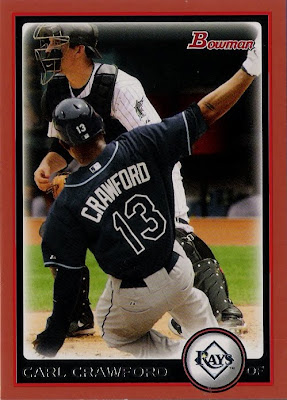 I like the back of the red card the best... Sweet. 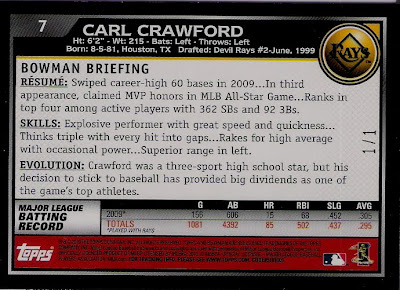 I am pretty happy with these. As I write this post CC is still in the midst of an MVP type season. He is batting .322 with 11 homers, 50 RBI, 108 hits, 21 doubles, 6 triples and 31 steals. He has scored 70 runs, has a .380 on base percentage and a .519 SLG%. Last night he had 2 hits in a loss against the Yanks in New York. Thanks for checking out my latest acquisitions... As a player collector I am on top of the world right now. Regular readers may recall that I am chasing the printing plate versions of this card-I am still stalled out waiting to find the magenta one. Now if the Rays crush the Yankees tonight I will be REALLY happy. If you have any CC cards you think I might need, drop me an email. Bacontowne at yahoo dot com. I LOVE this hobby! Go Rays! troll out.
Posted by Collective Troll at 4:06 PM