Don't Call It a Comeback...

So I hadn’t planned on a third post today, but I read Marc Topkin's column, The Heater on Tampa Bay dot com and got giddy over the news and scheduled this one to pop up while I am at work. Rocco Baldelli is expected to signing a minor league playing contract with Tampa Bay today. He is set to begin play as the designated hitter for the Port Charlotte Stone Crabs of the Florida State League TONIGHT! 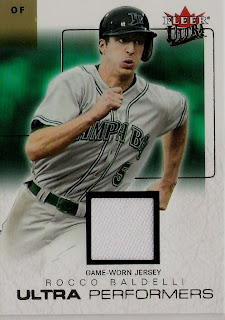 Rocco hasn’t played in a game since last season with Boston. He was on the field with the Rays at home last week, basically just playing catch, but it was a shoulder injury that caused him to “retire” so seeing him throw from the outfield to third base is pretty huge. Now is an ideal time for Rocco to begin his comeback. He will need some serious time to get back into playing shape. I’m thinking 2 weeks with Charlotte, a few weeks in AA and then more time in Durham. He would need to be on the big league roster by August 31st to be eligible for postseason. 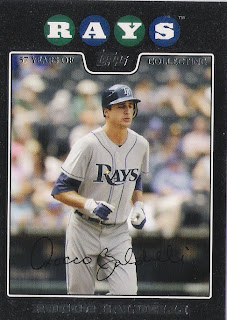 If the Rays don’t need him, the Durham Bulls could certainly benefit from his bat in their effort to repeat as AAA Champs. I personally would LOVE to see the outfield of Rocco Baldelli, BJ Upton and Carl Crawford ONE more time. Good luck Rocco! We’ll be waiting for you! Oh, from a career milestone perspective Rocco currently has 59 career homers and 59 career steals. He also has 98 doubles. I would love to see Rocco belt his 100th double and reach 60 homers and steals. Obviously that doesn’t make him a Hall of Fame candidate, but it would be cool to see him reach those personal plateaus. It would also be cool to see him playing for the Stone Crabs. I am going to have to see if I swing a night off from work to check that out... For more baseball card awesomeness, please zoom over to A Pack to be Named Later as I am sure I have a post up. Go Rays! Troll out.
Posted by Collective Troll at 7:23 PM