The Best Card of the Group Break and Some More Packs That Need a Home... 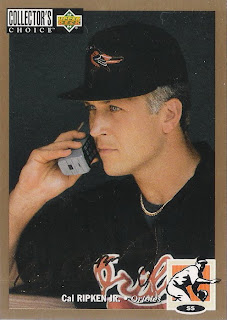 I know I said I wasn't going to post any of the group break cards myself, but I have to make one exception. There were some pretty awesome cards pulled. A couple of autos, several relics, a really low numbered card and plenty of Hall of Famers. There are also some unusual cards. Failed prospects, Bip Roberts on several different teams, Jose Rijo with several unusual props, glow in the dark cards, Nolan Ryan playing high school basketball, players eating, with their kids, making faces, wearing silly sunglasses and carrying oversized bats. It really has been a fun trip down memory lane for me. My wife has been helping me get the boxes ready to ship and this card came up. Now there a lot of cards that made us stop and laugh, but we agreed this was the best card out of the entire rip. Ryan, you might have to fight me for this one! It was a hard choice though. The '95 Collectors Choice was loaded with interesting photography. Aside from the cards, the old gum has been very interesting... I saved the gum from the 1978 O-Pee-Chee. 30 plus year old Canadian gum... It didn't look much worse than the 1995 Bazooka, that was pretty gross. 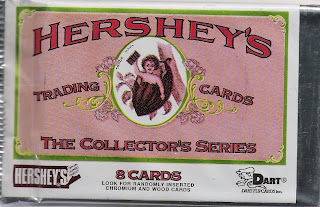 Anyway... I found a few more packs than need homes. 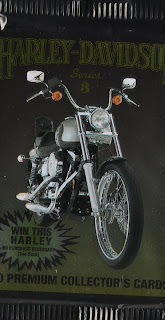 I only have a couple of each of these, but the first to claim will get them... Hersheys and Harleys. Have at it. Anthony K. I still need your address... Go Rays! Troll out.

Posted by Collective Troll at 1:56 PM