A Future SO Bright... 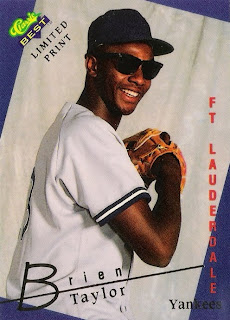 In 1990 the Braves had the first overall pick in the draft and selected Chipper Jones. 20 years later he is still there. He has taken them to the postseason 11 times in 16 seasons. He won a World Championship with them. He has been an All Star 6 times and was the National League’s MVP in 1999. He has hit 432 homeruns, won a batting title and drove in more than 100 runs in 8 consecutive seasons. He was a good pick and a good fit. The New York Yankees had the first overall pick the following year. They already had an everyday cornerstone franchise player in Don Mattingly. They needed pitching. They wanted to keep up with the Joneses, actually the A’s. Oakland was the league’s dominant team and in 1990 they snagged a "can’t miss" power pitcher named Todd Van Poppel and the Yankees wanted to keep up. They picked the best pitcher in the draft, a high school kid who could throw in the mid 90’s with a good curve ball to boot. They picked Brien Taylor. He was a 6’3” left handed pitcher from North Carolina. They really thought he would be the next Dwight Gooden and expected him to be winning 20 games before he was 20. His “advisor”, Scott Boras knew he could do it. The Yankees coughed up a million and a half dollars and Taylor got his fingers sized for all of the rings he was going to win. He and the Yankees realized quickly that high school batters aren’t as good as big league batters and even though he was left handed and could light up a radar gun, maybe he wasn’t ready to be an Ace in the Majors. He started off in the Florida State League where he was 6-8 in his first pro season. He had a respectable 2.57 ERA and he did strike out 187 batters in only 161 innings. He was named Baseball America’s top prospect and was set to start the next season in AA, finish in AAA and be the opening day starter in the Bronx in 1994. He pitched in 27 games in ’93 in AA and won 13. His ERA raised a little and his Ks went down, but he still looked promising. He never made it past AA though. He blew out his shoulder in a fight and after losing a year to surgery he wasn’t the same pitcher. He eventually got his velocity back, but never found his control. He stumbled around in A ball from 1995 to 2000 going 3-15 over that span. He called it quits after giving up 8 earned runs in 2 innings as a 28 year old in low A ball. He learned a trade, had some kids, worked for his Dad, had some personal problems, but he is still alive and well and living with his parents in his home state of North Carolina. 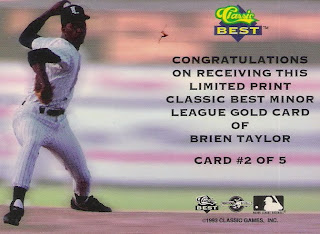 He lives on a street that was named after him in the home that he bought for his folks with the bonus money the Yankees gave him. I mailed him a letter a few years ago and he replied. He said he doesn’t follow the Yankees and he was working as a mason. He said his days of living lavishly were long gone, he was barely getting by. Obviously he has regrets, but he felt blessed to have the chance to fail. He was proud to be a blue collar worker and glad he had the chance to learn a trade after baseball. The ‘Bay wasn’t around in the early 90’s, but that didn’t mean that prospecting wasn’t. I discovered this card while ripping for my group break. When it came it out this card routinely sold in the $10-$20 range. His future looked SO BRIGHT he had to wear shades… Obviously there is a Strasburg reference in here. Brien Taylor was the second player to be chosen first overall and not make it to the major leagues. Stras has already made the majors. He will probably have a solid career. He looks sharp. I don’t hate the player; I hate his idiot collectors who make a mockery of the hobby I love. Thanks for reading! Go Rays! Troll out.
Posted by Collective Troll at 1:25 AM