Trading With Chris at Stale Gum
Last week I fired off an e-mail to Chris at Stalegum.com, I had printed out his want lists and found a few things he needed. Since it’s a task to get another regular old blogger person to reply to me, I figured I wouldn’t hear from a well-known You Tube celebrity and old school blogger with a dot com address for a while. He replied the same day and he said he would get together a stack of Rays cards for me. I sent his cards and two days later, I had a package from Chris. Not only did he sent me a yellow name SP from the 2007 Heritage set, he helped out with 5 of the 2008 Topps Heritage high numbers I needed. List is here www.collectivetroll.webs.com/2007.html if you can help.
On top of that, he sent two huge stacks of Tampa Bay Rays cards. There are tons and they are all high quality, wow-inducing cards. There is so much here, I am gonna have to do this post in multiple parts.
Part 1-Mini Madness!
Up until 6 weeks ago, I had never owned a single piece of an Allen & Ginter product, then Duane at Democratic Roadkill sent me a bunch, then some other people sent me more, but all of them were full-sized cards. Outside of blog scans, I had never seen an A&G mini. Now, thanks to Chris, I own some.
First is a 2008 Carl Crawford mini.

The sweetest mini is a BJ Upton from 2007. Great batting pose portrait and writing on the back so small I can’t begin to read it. Oh yeah, and it’s a black border card!!! I don’t collect A&G, as I’ve said a thousand times in this post, but from reading everybody else’s blogs, 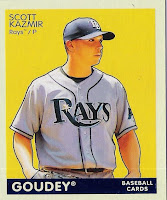 I truly despise the portraits on the ‘09s for Goudey this year. Everyone looks like the ghost of a pre-teen girl, but in slightly smaller form, it looks cool!
This is just the tip of the baseball card iceberg; I will post the rest of the cards he sent in about 5 parts. Thanks again Chris! If you don’t already, everyone should visit www.stalegum.com right now and watch his awesome pack breaks.
Go Rays!!! Seven in a row baby!!! Troll out.
Posted by Collective Troll at 4:42 PM