Here is another LONG overdue post of blogger kindness… I have had this stack of cards on my desk for a couple of months now. My desk is actually covered in stacks of cards, some of them staggering at over 6 inches high. I will someday get through them all. Like the good folks in AA say, I will do it one day at a time… This stack of cards came from Spiff in Kansas. Spiff, like me writes a couple of blogs. He is a Civil War buff (George Costanza?) and writes the Spiff’s World blog from that angle, but most of you are probably more familiar with his Texas Rangers Cards blog. If you check out his Rangers blog today you will see a post on Tom Grieve, papa to Ben, one of my favorite ex-Devil Rays… Anyway, he generously shared a note and a stack of cards with me and here are a few samples of what he shared… I never complain about getting Jonny Gomes cards, EVER. Gomes was 1-3 with a couple of RBI in a win over the Dodgers tonight. At less than a million bucks this season I think he is one of the best bargains in MLB. Plus I really like collecting his cards. 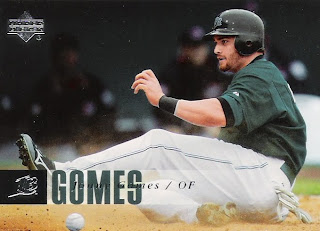 The first one is from 2006 Upper Deck; it is card #443 and shows Gomes sliding in slow motion. The next one is one of those cards that I had never seen, but thought must exist and therefore wanted it. It is from the Topps 50th Anniversary All Star Rookie Cup team insert series. 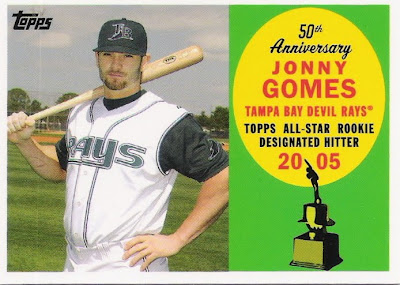 Gomes won the cup as a DH in 2005 when he hit 21 homers as a rookie. He also hit 3 homers in one game for the first time that year and became the first Devil Ray to do so. Actually he is the only DEVIL Ray to ever hit 3 in one game. 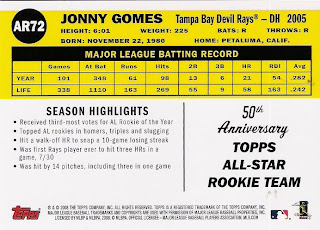 Evan Longoria did it as a Ray, but Gomes is the lone Devil Rays slugger to do so. Since I never get tired of this fun fact I will share it again… During his career Hammerin Hank Aaron hit 3 homers in one game just once. Joltin Jonny Gomes has done it twice so far. Okay, moving on to Scott Kazmir. I used to be a big Kazmir fan. 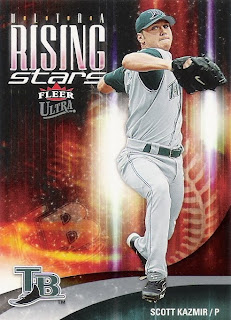 Actually I still am, but I have backed off on collecting him. I still enjoy getting cards of his I don’t own though. This one comes from 2006 Fleer Ultra, the Rising Stars insert set. It is card #URS8. The back of the mentions Kaz ranking 4th in the AL with 174 Ks at age 21. Speaking of awesome left handed pitchers… I am going to end this post with this sweet card of David Price. 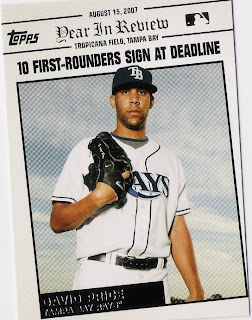 It is from the gigantic 2008 Topps Year in Review subset, card #YR135. The cards topic is 10 first rounders signing at the deadline on 8-15, Price being one of them. The card shows Price’s stats at Vanderbilt where he was 11-1 with 194 Ks in 133 ip. Price didn’t live up to the hype as a rookie last year, but I really believe he has a solid All Star career ahead of him. Thanks so much for these and all of the great stuff you sent Spiff; sorry it took months to post up. Go Rays! Troll out.
Posted by Collective Troll at 12:42 AM