Does Anyone Collect Football Cards??? Come and Get Em!!!

I have nearly 300 sites on my blogroll, but I still read the Blogger Bible, aka the Sportscards Blogroll every day in hopes of finding new ones. They seem to pop on a near daily basis and they are not all blogs I write… And by the way, a huge thank you to BDJ610 for maintaining this extremely valuable resource!!! Thanks dude! Anyway, a new blog that caught my eye recently was the Emerald City Diamond Gems site. The dude is a Mariners fan. I already have a M’s fan to trade with in Bud from First Day Issue, but that doesn’t mean I can’t read another M’s blog. While reading ECDG I read that the guy had an Alvin Davis collection going. As a Danny Tartabull fan myself, he and Davis were teammates in the mid-80s and I knew that I had a few of his cards. I knew that I hadn’t seen said cards in many years, but I knew I would still have them. This meant a trip up to the attic. Luckily they were in the first shoebox that I grabbed. The reason why I am sharing all of this with you guys is that while I was searching for Alvin Davis cards I found some football cards. 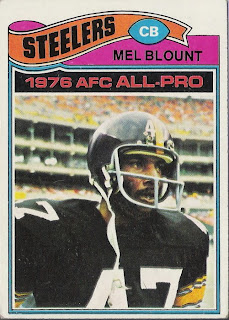 Even though they were in the attic and not stealing space from the rest of my collection I would still rather find them a new home. All of this stuff is up for trade. I collect baseball cards. Whatever you want, please claim the specific card(s) in the comments and make me an offer via email at: bacontowne at yahoo dot com. Send me your address with the offer. I had planned on making today a huge mailday. I got about 15 packages together for folks all over the blog-o-sphere. One package I don’t have packed up is for the 6th place contest winner-JDs Daddy who still hasn’t sent me his address or selected what he wants. If you know this person and are a winner yourself it would be in your best interest to encourage him to contact me with his pick and address. According to the rules in the original post the prizes will not be shipped until everyone makes their selection. If I don’t hear from him by Tuesday I will ship the cards and chose a new 6th place winner. That seems like more work than I want to do, so please get in touch! 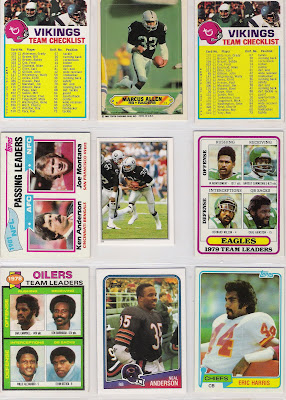 Okay, there is a point to this post, I promise. Actually I have already outlined the point, it is to get rid of these damn football cards and replace them with baseball cards! If I owe you cards, you can claim these towards my debt, otherwise be prepared to offer me something in return, okay? If you don't have anything to offer you can still ask, I am a fairly nice Troll and I don't want these cards to suffer in my attic any longer. I also don't want them cluttering up my living room... The other point of this post is to introduce a new player collection. A football player to add to the mix. 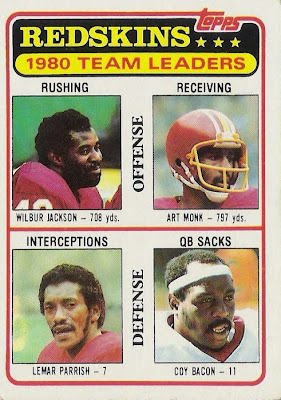 Somehow I had never heard of this guy until I found this card from 1981 Topps that shows the Washington Redskins team leaders. In the lower corner is their leader in sacks. His name is Lander McCoy Bacon, but folks just called him Coy Bacon. A graduate of Jackson State, Bacon played for 14 seasons in the NFL with 4 different teams. He also spent one year with the Washington Federals of the USFL. He was a 3-time Pro Bowler and played for one of the greatest defensive lines of all time, the Los Angeles Rams Fearsome Foursome. All that stuff is impressive, but I mainly like his name, Coy Bacon. 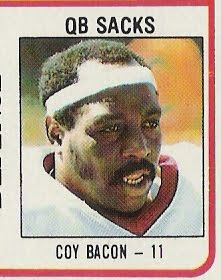 That fact that he is a badass is pure bonus. If you have any cards of him, I want ‘em! Okay, I peppered a few card in this post already-a sheet of 9 random cards, a 1977 Topps Mel Blount with 2 soft corners, a 1979 Topps OJ Simpson and a Minnesota Vikings team checklist that I have 3 copies of for some reason...Now I will have them grouped by player and team. I am not looking for a huge return on them. I think it’s sort of neat to have cards of OJ Simpson and Lawrence Taylor, guys whose infamy goes beyond the gridiron, but not so neat that I want them cluttering up my binders. The only card I vaguely want to hang onto is the 1978 Steve Largent card. A, he is one of my favorite players of all time and B, it’s a 1978 Topps! I think everyone would agree that ’78 baseball looks WAY better. Okay, that’s it for now. I will be in Tampa, Florida for a national invitational roller derby tournament with top teams from all over the country. I will be broadcasting for the Derby News Network. I am telling you guys this because it means I won’t be at my computer until late Saturday night. All of these cards are Topps, Here is what we got:
49ers Trio
1979 Steve DeBerg #77, 1984 Roger Craig #353 and 1984 Joe Montana Instant Replay #359.
Rams Trio (OPPS-Forgot to scan these 3... Don't have the OJ scan either... Will add them in a couple of hours, sorry)
1984 Eric Dickerson IR #281, 1984 Star Set Eric Dickerson #2 of 11, 1984 Eric Dickerson Record Breaker, no #. (OOPS-Forgot to scan those 3, too, sorry! Stupid absent minded Troll!)
Eagles Duo. 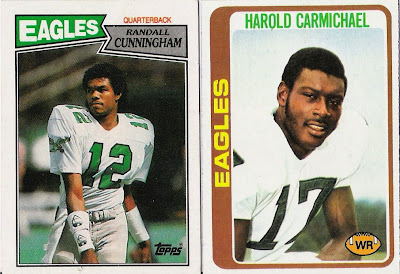 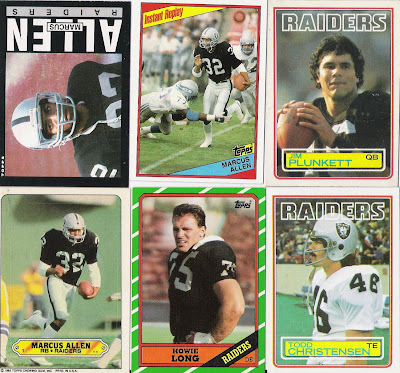 1985 Marcus Allen #282, 1983 Marcus Allen Topps Sticker #1, 1983 Jim Plunkett #307, 1983 Todd Christenson, 1986 Howie Long #67 and 1984 Marcus Allen.
That’s it for now… I think this is my first football card post and it will be the last except for any new Coy Bacon cards that hopefully find their way to Casa de Troll. As an end note I am laughing to myself that I lasted the entire football season posting about baseball cards and as soon as the first week of the season is underway I am posting football cards. Geez. Happy hunting. I will TRY and have the missing scans added by 1:00 AM Eastern time. Go Rays! Troll out.
Posted by Collective Troll at 11:41 PM