They are majestic, magical and miniature. I am talking about mini-cards. I really like the minis. When I was collecting previously they were not that common at all and the few that I had seen were kind of annoying because of the storage issues. Since I have got back into collecting this year I have become mildly obsessed with these little things. 2009 Allen and Ginter was my introduction to them and that opened up other years of Ginter, from 1887 on up as well as Topps T206 reissues from 2002 and 2009 both. 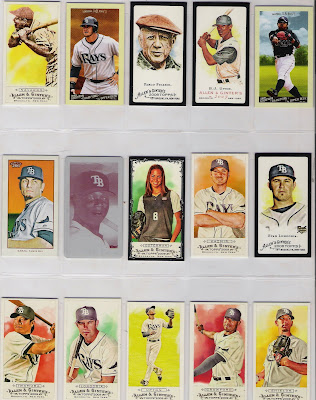 Of course Goodwin’s Champions and looking back Pacific Private Stock was making them in the late 90’s. I have never owned an actual Topps T206 original, but I have possessed several 1887 Allen and Ginter cards. I actually still have 2 of them. I don’t really know what the attraction is. Maybe they are cute because they are small, maybe it is still the newness which has yet to rub off. I don’t know what it is, but I can’t seem to shake my obsession with these little bitty cards. Since I have gotten pages to hold them efficiently I have been obsessively filling them. I finished off the 2009 Allen and Ginter World’s Greatest Hoaxes set and still have those. I was working on the World Leaders and Creatures of Myth Legend and Terror, but almost all of them are long gone. I wasn’t very close to finishing either set off, so I am not crushed over it. When my infamous card theft occurred I had a fair amount of minis in the box. I have mentioned that were several 1887 originals and there were also a number of cards from my various collections. 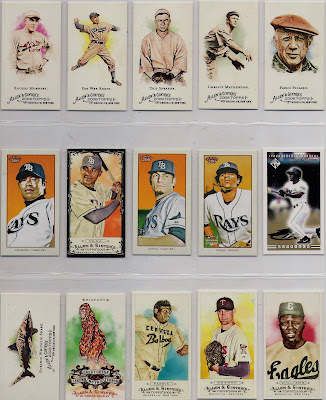 I lost 3 different 1 of 1 cards and a number of cards that were not nearly that limited, but were pretty darn neat. I didn’t lose everything though. I had about ¾ of my minis safe at home. In the last 2 months my readers and all of my friends in the Blog-o-Sphere have come through big-time to share their collections with me. This last week I have been doing a lot of sorting and cleaning up regarding my card collection. I have filled some want lists, pulled off some trades and sent out some random blogger kindness packages of my own. By no means am I done either. I still have far more cards than I need hanging around in my house. I am slowly buying more binders and more Ultra Pro pages. If it doesn’t fit into a binder or in the Rays or vintage showcases, it must go! 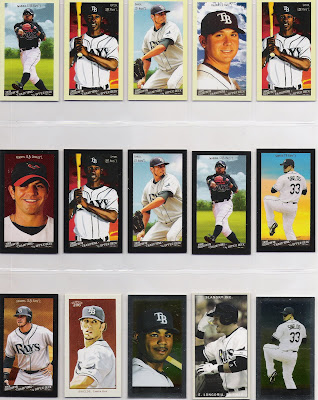 I really hate posting “trade bait” but I may have to eventually to fully liquidate. For now I have been having good luck sending cards to the many folks who I have traded with in the past, many of the same peeps who have blessed me with their kindness. Back to the minis and their magical majesty. Prior to today I had my mini cards that were part of sets or were planning on growing into sets in a binder, but my single minis-the Rays cards and such were relegated to a box that had the word MINI scrawled on it in crayon. This was not a fitting showcase for such awesome cards so I liberated them all from their boring box and randomly stuffed them into 15-card pages. The result is 60 cards in a binder. 60 glorious minis! Rays and Roberts and Robinson to Cat and Pat and Mr. Shoppach. I am pretty psyched to see all of these minis spread out in all of their glory. 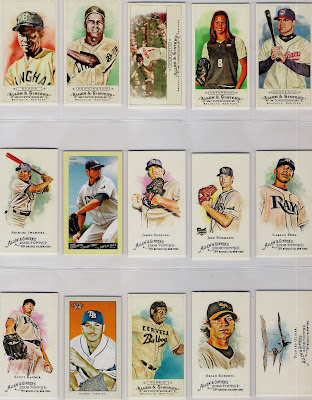 I didn’t scan the backs, but those are pretty darn cool, too. I have the Tampa Bay team set filled for 2008 and 2009 Allen and Ginter. It’s nearly done for ’09 Goodwin’s. My current mission is to fill both 2002 and 2009 T206. Chris Harris from Stale Gum hooked me up with a few from both years and lit the fire under me. I think I like the 2002 set even more and it includes Grieve and Gomes as well as Upton and Dewon. Anyway, I am really happy to be able to flip through my binder and admire my minis. I hope to fill a 5th page VERY soon. Thanks for looking. I hope you can actually what is what in the scans. If you have any minis that you want to get rid of, I would be glad to offer them good homes. Also, with all of the organizing this week I have filled up a number of pages. Pages of sets, team sets, insert sets, player collection pages and theme pages. I do plan on showing them all off. You have been warned! Go Rays! Troll out.
Posted by Collective Troll at 2:57 AM