This package of awesomeness came to me from Matt F. the legend behind Heartbreaking Cards of Staggering Genius and also a Pack To Be Named Later which are easily two of the best card blogs on the web. I could be wrong, but I am pretty sure that Matt has a birthday coming up Sunday. Since you’ll be checking out his blogs anyway, drop him some well wishes while your there. Matt is the provider of the image for my header. Since I was planning this post I took it down to cut down on redundancy, but trust me it will return.

It is tri-fold card from 1993 Upper Deck. It is styled after the 1912 T 202 cards. I think these came from 1993 Baseball Heroes, but this is honestly the first one I have EVER seen. I really love this card. It is a pain to store yes, but it is the ideal size for a blog header and this one features 4 of my favorite players of All Time who also happen to be majorly historically significant. It shows Larry Doby and Minnie Minoso on the sides, but the center picture shows Minoso, Joe Black, Doby and Monte Irvin. It’s awesome.

The T202 header card didn’t arrive alone. He sent a fairly well stuffed envelope of goodies. This arrived well I had the poll up for the next player I should select. Matt picked Larry Doby as many of you did. The poll ended in a tie between Doby, Bill Mazeroski and Bill Madlock. I have yet to think of a tie breaker, but I certainly don’t mind picking up cards of any of those guys and Matt hooked it up with some great Doby cards to add to the binder. 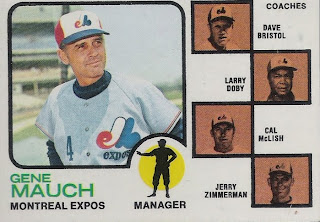 These first two had post its attached to them asking if they count as Doby cards. 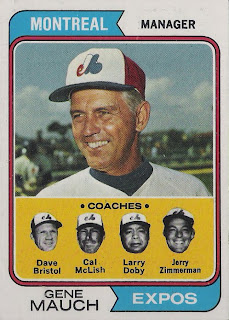 The answer is Yes! It does seem a little bit selfish of Gene Mauch to be SO much bigger than everyone else, but managers can be glory hounds. The Expos were my original childhood favorite team and these cards are super special to me. 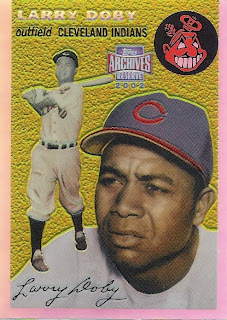 My true favorite Doby card in the bunch (other than the T202) is this one. It is a 2002 Topps Archives version of Doby’s 1954 Topps card which I don’t have YET. 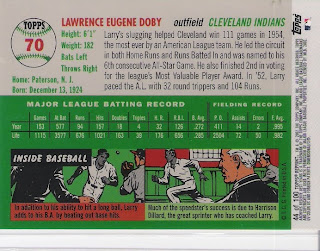 Of course I would rather have the original, but this card is all shiny and chromed out and pretty darn awesome in its own right. Next up are a trio of cards of former Devil Rays, Rays and Swallows infielder Akinori Iwamura. Aki is currently holding down second base for the Pittsburgh Pirates who got off to a surprisingly good start this year. Reality is setting in for the Bucs who have dropped to 7-8 after a humiliating 20-0 loss to the Brew Crew last night. 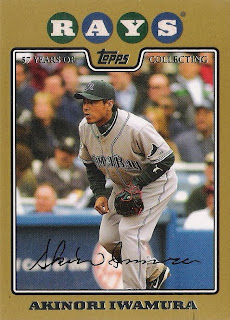 Aki is holding down the leadoff spot for the young Bucs and is still waiting for his bat to wake up this season. The first card to show is this GOLD version of his 2008 Topps card, #243. I am obsessively trying to replace my lost GOLD cards and also trying to fill the Rays team sets in gold. This card gives me 9 (a full page!) for 2008. 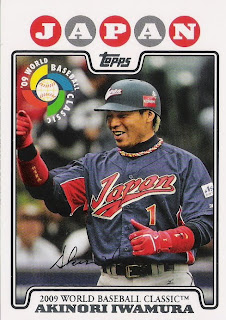 Also from ’08 Topps is this WBC card, #WBC4 of Aki representing Japan. The last Aki card comes from 2009 Goodwins and has a little swatch o’ jersey in the shape of an M at the base. 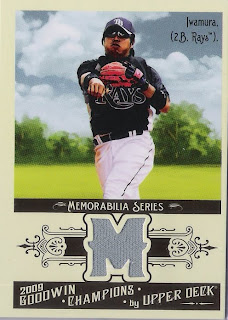 From one former D-Rays leadoff hitter to another, this is a 1998 Pacific Paramount card #98 of Quinton McCracken. 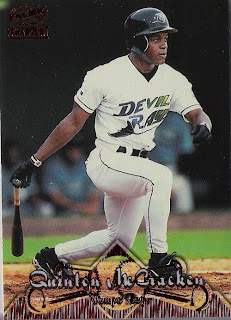 The D-Rays grabbed McCracken from the Rockies and he was the sparkplug of their Inaugural squad. I have been organizing my PC in my spare time this week and I have my Longoria binder straightened out and free of dupes. The dupes that are sorted out aren’t very fancy, but are up for trade if you are interested. 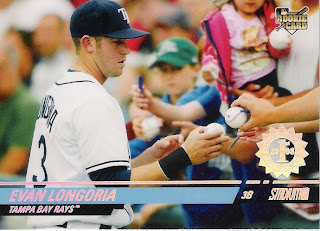 Anyway, this one has a spot in the binder waiting for it. It is a 1st Issue stamped version of card #108 from 2008 Stadium Club. In person Longo is a super signer and I like the kids in background. I do feel bad for the beheaded girl in the back. The last card I will show from this awesome surprise package is from 2007 Fleer Ultra. 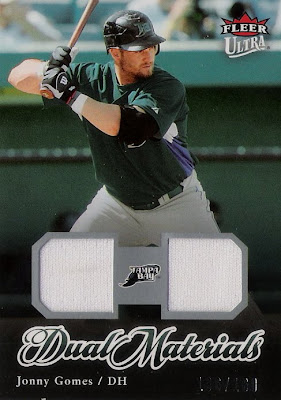 Matt seems to be a magnet for Jonny Gomes cards. I think this is the 3rd auto or relic he has pulled and sent me. It is from the Dual Materials series and is serial numbered 136/160 and shows two bits of white jersey. I don’t know if you can tell from the scan, but there is dirt on the swatches. Awesome! Thanks so much Matt! Happy Birthday a few days early! I sent you a package, but you will probably get it a few days late, so it all evens out. Go Rays! Troll out.
Posted by Collective Troll at 2:13 PM