This is another quick edition of blogger kindness, slash trade post here. These cards came from the Roof God, that Detroit Tigers slash Mark McGwire fan, slash Brett Favre fan that owns the Off Center Cards blog which hasn’t been updated in like 2 years. Seriously Roof God, POST! Anyway, Roof God hooked it up with an envelope full of AWESOMENESS. Here are some of the highlights… Beginning with a couple of new cards of Akinori Iwamura. First off, the serial numbered GOLD version of his 2009 Topps card. This card is number 98 and it is serial numbered 0709/2009 and it’s GOLD! 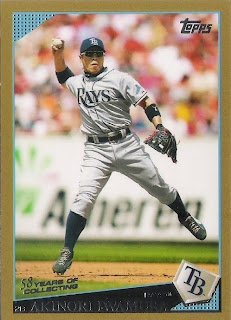 Y’all have been hooking me up with gold Rays like crazy. I lost about 100 of them, but they have been replaced with a whole bunch and the GOLD collection has more variety than ever before. Thanks blog-o-sphere!!! Another Aki card he sent that somehow has avoided me is this 1952 Topps rookie card of Iwamura, number 1 in the set. 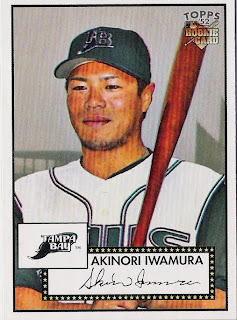 I love it when a card is the same number as a player. AWESOME! Moving back to 2001 and a couple of cards that I was lacking, but lack no longer… Starting with 2001 Topps Chrome. He sent a few, but I want to show off card #T253 of Joe Kennedy. 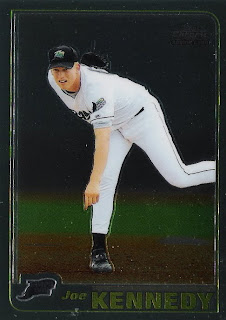 I had teased the idea that I might be collecting Joe Kennedy after I finish off the Jared Sandberg PC. That is still the plan and since I mentioned that my collection of the Patriarch has improved from about 3 cards to over 20 and it seems to grow every week. Another 2001 card he sent was the Topps GOLD card of the legendary Toe Nash. 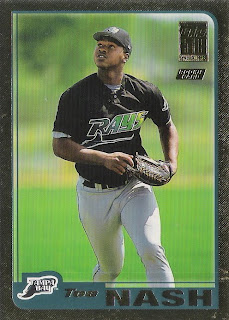 He was called the “Greatest Little Leaguer ever”, but didn’t quite translate that into adulthood. I think his legend has prevented most people from parting with his cards and up till last month I had a total of none of his cards. Now I have a few, but this is easily the best. It is GOLD and serial numbered 1378/2001. Moving up to 2007, here is another card #1, this time from Tri Star Prospects Plus featuring first round pick David Price. 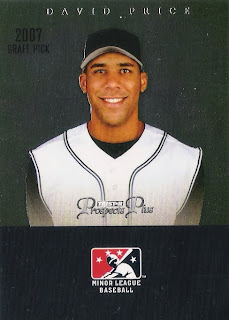 I’m not sure I really like the DMV style photo or the airbrushed cap, but I don’t mind adding another ’07 Price card to the binder. When I opened the package, this card was on top. 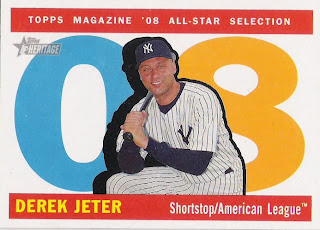 I was worried that RG had sent me someone else’s package because Jeter cards are normally not welcome in Trollville. That is unless they are for a set that I am desperately trying to finish, then they are VERY welcome. This is an SP from 2009 Topps Heritage, card #487. I wonder if I will ever finish this one… 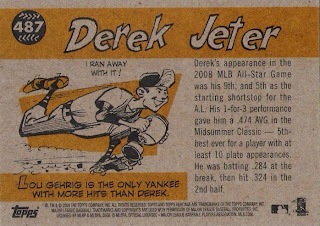 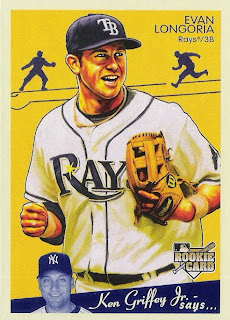 I am sorry, it looked like Jeter, but it is actually Ken Griffey Jr. wearing a Yankees hat and a stoopid grin. I need to go back and look at my other cards and see often they showed Griff looking like this. Anyway, I owe a huge thank you to the Roof God! These cards are awesome!!! I wish I had more time, but I must get back to work… I am taking Tuesday night off to enjoy Opening Day at the Trop and then Saturday off for the Charlotte Stone Crabs home opener. This means I will be working every other minute of the next two weeks… MANY more awesome blogger kindness, trades and PC addition posts to come. Go Rays! Troll out.
Posted by Collective Troll at 7:34 PM