The third card in this ongoing series comes from 2009 UD Goodwin’s Champions. It is an on-card gem of Matt Garza. 2008 was Garza’s first year with the Rays. He and Jason Bartlett came over from Minnesota in exchange for Delmon Young and Brendan Harris. 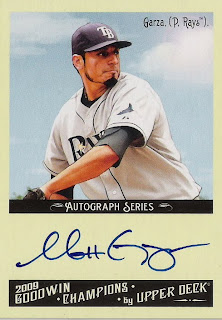 I think that Delmon Young will be a great player someday, but that trade is one of the best in Rays history and paid immediate dividends. Garza was 11-9 with a 3.70 ERA in 30 starts for the Rays. He tied for the league lead with 2 shutouts and was third in the AL with 3 complete games. He dazzled on the national stage in the 2008 ALCS. Against Boston Garza was awesome! He was 2-0 in 2 starts with a 1.38 ERA. He pitched 13 innings and struck out 14 and was award the ALCS MVP honors. Like Bartlett, Garza has many certified autos available during his days as a prospect with the Twins, but not too many Rays autos. This is my favorite. After 2 months of being outbid at the final second I finally won this one and I love it! This is my third Rays auto from Goodwin’s and I hope to get them all. 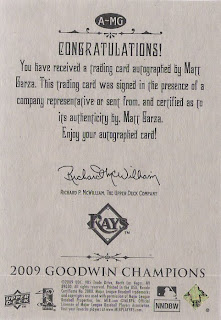 Incidentally, Garza started this season red hot. He has cooled down a bit, but is still holding onto a very respectable 7-4 record with a 3.50 ERA and a shot at making his first All Star appearance this year. I expect to see Price and Niemann on the staff, but it would be amazing if Garza makes it, too. I love this game and I love this hobby! Thanks for reading! Go Rays! Troll out.
Posted by Collective Troll at 1:45 PM