The Collective Troll Christmas Card of the Day! 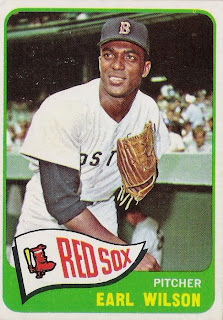 Welcome Trollites!!! I wanted to extend a Merry Christmas and Happy Holiday wishes for the blog-o-sphere once more. It has been a wonderful year for me and I wanted to thank all of you for having a hand in making it so.

I didn’t want this post to solely be of holiday well-wishes, so I found another glorious red and green card to feature. This one was on my wantlist for over a year, but I can scratch it off and for that I am thankful. It is also one of the sharpest cards I own…

The Christmas Edition Troll at the Plate Card of the Day comes from 1965 Topps Baseball, aka the best set of the past 50 years. It is card #42 of Boston Red Sox pitcher Earl Wilson. Despite the fact that he never played in an All Star Game, Wilson was one of the top pitchers in the American League during the 1960s. He was signed by the Red Sox organization as a teenager in 1953 and made his Major League debut with Boston in 1959. He was the second African American player on the Red Sox, after Pumpsie Green, and was the first pitcher.

By 1962 he was a regular part of the Red Sox rotation and posted a record of 12-8 that year. That same season, as the back of the card mentions, Wilson no hit Bo Belinsky and the Angels 2-0. Wilson provided the offense in that game for the Sox hitting a homerun to put the Sox on the scoreboard. With that no hitter on June 26th, Wilson made the history books several ways. He was the first African American pitcher to throw a no-hitter in the American League and he became just the third pitcher to throw a no-hitter and hit a homerun in the same game.

Wilson was a successful batter and hit 33 homers in 740 at bats over his career. This ranks him 5th All Time among pitchers. Only Wes Ferrell, Red Ruffing, Warren Spahn and Bob Lemon matched him in that category. 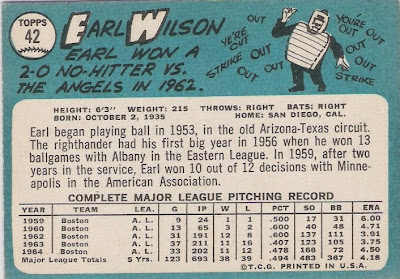 In 1967, his first full season in Detroit, he had his finest year. He was 22-11 in 38 starts for the Tigers. He logged 264 innings and completed 12 games. His 22 wins tied him for the League lead. Had the Sox not traded him away many believe they would have won it all in ’67, but alas the Curse of the Bambino and all…

As a long sought after card and a lovely red and green color scheme, this seemed the perfect Christmas card…

Go Rays! Good night Pumpsie Green wherever you are and thanks to everyone who has hooked me up in my quest in for '65 Topps AND thanks to Larry and everyone else who has sent me Holiday greetings! You guys rule!! Troll out.

Posted by Collective Troll at 9:05 PM