Nitty Gritty Type Troll at the Plate Card of the Day! 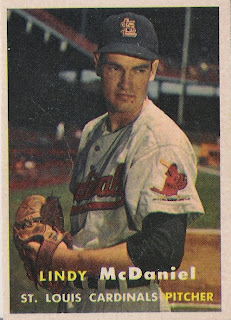 So, I am all about Oklahoma right about now and I think I am going to do Oklahoma-themed posts here on the Troll until I leave for OKC on Tuesday... Typically you would find this on the Nitty Gritty, but today's Nitty Gritty Oklahoma Troll Card of the Day comes from 1957 Topps baseball, card #79 of Cardinals pitcher Lindy McDaniel. This is McDaniel's rookie card and it shows him as a 20-year-old starter for St. Louis. Although this is Lindy's rookie, 1957 was McDaniel's 3rd season in the big leagues, but at 21 years of age, 1957 was his coming out season. He worked mainly as a starter and posted a very impressive 15-9 record with a 3.49 ERA in 26 starts for the Red Birds.

The back of the card mentions that he was a well sought after bonus baby who signed with the Cards for a $50,000 bonus in 1955 out of the University of Oklahoma. He skipped the minors all together and joined the Cards that year. He only pitched in 19 innings, but the following year he was 7-6, followed by his 15 win season in '57 when he finished 10 of his 26 starts. By 1959 he had converted to a reliever and that same year he led the National League in saves with 19. He would remain a reliever for the bulk of his remarkable 21-year career. In 1960 he was named to both All Star teams and won the first ever Sporting News Reliever of the Year Award. He would lead the NL in saves again with 26 and also led in winning percentage (.750) and posted a 12-4 record with a 2.04 ERA. He finished third in the Cy Young vote that season as well.

He was traded to the Cubs as part of a 6-player deal after the 1962 season and in his first year in Chicago he would once again lead the NL in saves with 22. He would finish in the top-1o in that category 7 times over his career. In 1963, with the Cubs, McDaniel would be named Sporting News Relief Pitcher of the Year a second time. 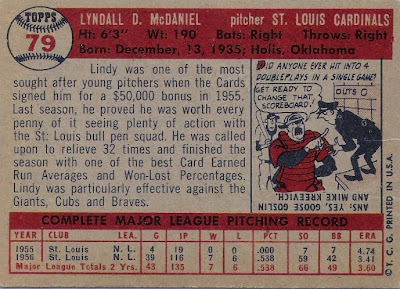 As a member of the Yankees in 1968 Lindy McDaniel set a record by retiring 32 consecutive batters over 4 games. He set a record in the NL by playing in 225 straight games without an error.

He saved a total of 172 games which ranks him 59th on the All-Time list, but at the time of his retirement only Hoyt Wilhelm and Roy Face had more saves than him. He also ranked second only to Wilhelm in relief wins.

The Oklahoma native stayed healthy and consistent and enjoyed success in both leagues over his 21 year career which spanned 3 decades. Since broken, he had held the single season record for saves for the Cards, Cubs and Yankees. His 987 games ranks him 15th on the All Time list and his 2139 innings is far greater than most ahead of him.

McDaniel retired after the 1975 season when he was 5-1 over 40 games for the Kansas City Royals. All tolled, McDaniel posted a 141-119 record playing for 5 different teams. He has a career ERA of 3.45 and struck out 1361 batters. McDaniel dropped off the Hall of Fame ballot after his second year of eligibility, but is regarded by some as one of the finest relievers of his era.

The native of Hollis, Oklahoma is alive and well and still living in Oklahoma. Perhaps I will run into him next week.

I was unable to reach my son by phone today, but the contest is still open!!! Regardless of my posting frequency y'all can guess once per day. Keep em coming! Thank you all for the well wishes and kind words, y'all have made this Grandpa to be feel really good... Go card collecting! troll out.
Posted by Collective Troll at 3:16 AM