Homeland Security is Hard at Work, Trading with the Waxaholic-Part 1 in a 2 part series

Okay, ask yourselves what the greatest potential threat to our country’s security could be. A Peruvian pan flute band perhaps?

Not even close. Homeland Security works hard every day to make sure that acts of postal terrorism do not cross the border from the great white north. 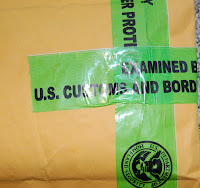 I receive packages from Canada quite often from my other endeavor, Bacon Towne Records. Demos from bands with the F word in their names, often followed by the words “the system” or the “the world”. These bands do not pose a threat and these packages have never been opened.
No, the answer to the question is, imaginary drum roll please… A package of baseball cards. This package wasn’t just opened to check that its contents were in fact baseball cards as the customs slip stated. No, they were opened and mutilated to ensure the safety of our country. The package, which came courtesy of Captain Canuck from the awesome Waxaholic blog, contained two previously unopened packs of cards and three small stacks of cards in team set bags. The unopened packs were opened and gone through. In fact, one of the packs (1991 Topps)

was sliced open and had the majority of the piece of stale gum removed. I received a few small shards of gum. The rest, I am sure, are in some border laboratory being tested for anthrax. Our tax dollars at work. The other pack, 1991 O-Pee-Chee, was also opened, but did not contain any gum. It did contain a depiction of the great Dave Stieb, which did manage to cross the border. The teams set bags were sliced as well.

Delmon Young took the worst of it. Three cuts across his card (look closely at the scan). Perhaps the border agents were Twins fans who liked to think he had never played for another team?
The damages were limited to the top cards in the bags, which was good, and it seems that the only thing missing from the package was a few bits of gum, also good. It does make me question the intellect of the inspectors who had to use a knife to open a team set bag that wasn’t sealed. Hmm. Perhaps they thought they were dealing with an intra-border drug ring and LSD was concealed in these presumably innocent baseball cards? I guess we’ll never know. They resealed the package with green tape, but destroyed the return address. I can only assume the package came from the

Captain since he had said he sent one and I don’t have many trading pals in Alberta. He did leave a note, but it was signed Brian. An alias. All part of his elaborate plan I am sure. Well, it took me a day to get over the intrusion, but a few Molsons later and I was ready to re-open those old packs of cards. I hadn’t ripped a pack of 91’s since, well 1991. This was gonna be a treat. It started out great. I am very fortunate that the card featuring Yankees #1 draft pick Carl Everett was unharmed.

Everett was a 1st round draft pick for the Yanks that actually made it (no Brien Tayor here!). He was an All Star twice and was the primary DH on the White Sox when they won it all in 2005. He lasted about 14 years in the big leagues and was always an informative interview. “Jurassic Carl” was one of the few athletes to speak his mind always. He shattered many historical myths for me. I had often suspected that the dinosaur fossils I had seen in museums as a kid were all man made fakes. It makes sense now; I mean, have you ever seen a dinosaur? Good old Carl Everett. He’s a star in the Atlantic League now. Last season, playing for the Long Island Ducks, he put up amazing Triple Crown numbers, .327/29/100. I hope he makes it back to the major leagues; I would like to hear his opinion on 911 or the Iran elections or whether Barack Obama is a real person or just a muppet manufactured by the media.
Next outta the pack is Jose Oquendo,

one of the managers (along with the Wizard of Oz) for this years Futures Game.

I also got a Don Mattingley! I guess it’s still a thrill to pull a Donny Baseball.
There is a manager card of Bobby Valentine.

I’ve mentioned it before, but the small town I grew up in had a Bar B Q joint in it called “Bobby Vs”. It was really neat actually, it was like a sports bar that kids could go to with their folks. The food was horrible, but there were baseball cards varnished onto the tables-sweet!
The most interesting looking card in the pack is of pitcher, Mike Jeffcoat.

Unfortunately, this is a victim of a gum stain. Still, look close at the picture. That is Julio Franco in the background with his hand on his hip, ready to take a nap. I’m guessing that was because Jeffcoat was dealing unhittable stuff that deal and the infield was just decoration.
The pack of O-Pee-Chee didn’t disappoint either. This was the OPC that I grew up with, knew and loved, complete with the French interpretations.

We know that Andre “Hawk” Dawson hit a ton of homers and had a gun for an arm, but did you know his position is voltigeur? Or that Blue Jays ace Dave Stieb was a lanceur?

That’s the kind of stuff that baseball cards taught me. I tried to get these terms in my everyday speech on the playground, but after the first broken nose, I stopped and called Stieb a pitcher.
Aside from the awesome 91’s, he set me off another childhood flashback with this awesome 1993 Collector’s Choice checklist of Danny “Bull” Tartabull.

The Bull was my favorite and my collection did not contain this goofy card before. Way to go Captain, glad someone reads this garbage!
I have to go to work, so you’re going to have to tune in tomorrow to find about the awesome Rays cards he sent my way!
Posted by Collective Troll at 11:46 PM