Tradin' With The Night Owl

I had sent the Night Owl a few old Dodgers cards that I had lying around the house a few weeks ago. He responded by sending me a stack of no less than 77 freaking Rays cards. Wow. When I had first contacted the Owl, I really just wanted to send him a fan pack. At the time, his blog was one of the two that I read on a daily basis (Cardboard Junkie being the other) and I wanted to show some appreciation to a skilled, veteran blogger. I certainly didn’t imagine him spoiling me with a card for every long ball that McGwire hit in 1998 (plus seven for good luck). Well, spoil me he did, here is the proof. It’s in the pudding, err cards. Before the cards, I should mention that there was a note, too. Far less suspicious than the type-written note I showed two posts ago. I like the note. It’s a nice touch, plus it reminds me who sent it. I generally tear the envelope up pretty quickly, sometimes destroying the return address. 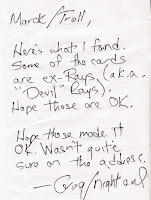 Okay, back to the cards. First off, he sent me two Joe Maddon cards.

Of all the cool stuff he sent, I think I was more excited about these. I like coach cards, I like manager cards. I hadn’t even seen one of big Joe, yet. I was wondering if he has a card in the 2009 Heritage set, but I have two of them now, a 2006 Topps and ’06 Upper Deck. He actually sent a huge stack of ’06 Topps and Upper Deck, full team sets for both. They are really neat, but every single card in both series is taken in spring training. Kinda weird, kinda lazy. I do like the fun fact cartoons on the back of the ’06 Topps. I can’t pick up a card without reading those.

There’s one, on the back of Joel Guzman’s ’06 Topps card #UH141 that says that Harmon Killebrew had 8,147 at-bats without a sacrifice. I know the Killer isn’t bunting guys over, but no sacrifices at all? I dunno.

Aside from the Maddon’s, Ben Zobrist, card #1194 was the highlight for the ’06 UD.
A duel player card of Travis Lee and Rocco Baldelli, titled “Power Rays”, card #654 was my favorite Topps.

Mostly because the two had combined for 12 home runs the year prior.
He included a 2008 Topps Stadium Club, card #135, of Jeff Niemann.

It’s awesome because it has some type of a “1st” stamp on it (my eyes can’t see things that small), its odd because the 6’9” Niemann looks like he has a hunch back in the picture.
There are a handful of awesome Scott Kazmir cards in the bunch.

A 2009 Upper Deck Timeless Moments, A Piece Of History card with a white jersey swatch in the middle of the card. That’s awesome!
Not as cool,

but more sparkly is a 2009 Upper Deck Spectrum card, #92. I buy packs of Spectrum on occasion, but I have yet to pull a Rays card. They work as good trade bait, though.
The Night Owl also gave me the David Price hook-up, including a ’09 Upper Deck series 2 Starquest card (SQ-37)

of the young righty. He also sent along the 2009 Heritage offering of Price,

which looks very throwbacky and very awesome. Oh and a 2009 Topps retro, too.
There was also a sampling of ’09 UD base cards, too.

My fav is this Carlos Pena, number 363, which shows the slugger cradling his Silver Slugger award. It is the first of many, I am sure!

Also in that series is my first card of super middle relief guy, JP Howell.
He also included a ’06 Topps card that earned him even more points than the Maddon, card #489 of super shortstop Jason Bartlett.

I am still trying to become a Bart “super collector” and I am another step closer.
Next in the giant stack are some Topps Attax cards. I’ve seen these at the store, but I have always passed. I am somewhat intrigued because I like games, but it seems like it’s an online game which makes it far less intriguing. I am a board game kinda guy, but has anyone played Attax?

Anyway, he sent along a Kaz and 2 Burrells, one of them is shiny. I would never call myself a Burrell fan, but I am happy that I won’t have to use a card of him in a Phillies uniform every time I talk about him.
Rounding it all out, he sent a good sized handful of 2009 Topps retro’s. I have finally figured out the difference between the regular and the retro cards. It makes me feel like an aficionado.
This one is card number 204 of Rays pitcher/slugger

Andy Sonnanstine. Andy took a loss against the Mets last night, but he did have a hit and his average sits at .300. If we (the Rays) make it to the World Series, look for Andy to pinch hit or at least pinch run. He is a renaissance diamond guy who takes all phases of the game seriously.
The final card of note is actually a pretty horrible looking card by the very short lived card company, Royal Rookies. It shows Ryan Ballard, who made it to high A level in 2000, playing in 14 games and amassing a single RBI. Not exactly a prospect. As far as I know, that was Ballard’s last attempt at pro ball. 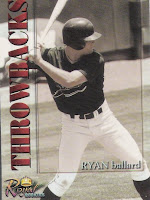 What makes this card neat is the photography. It’s not neat because it’s good, it’s actually cringingly awful. I’ll give you all 3 guesses who the shutterbug was on the majority of the horribly awful 2001 Royal Rookies set…
Thanks again for the trade Mr. Owl. I feel like I owe you, so expect some more Dodger blue in your mailbox soon. If there is anyone reading this that doesn’t read Night Owl, you will find it a far superior blog, so stop wasting your time here and head over there!
Thanks! Go Rays!!!
Posted by Collective Troll at 8:18 PM