I am Just Wondering If I Get Two More Wishes...

Working till midnight on a Saturday night sucks. It got a whole lot better when I got home and logged onto the computer to a bunch of press releases from Tampa Bay Rays PR. The Rays granted this fans top wish today by designating Pat the Bat Burrell for assignment. This is not a joke. This is for real, the Rays have officially cut ties with the first player chosen in the 1998 draft. 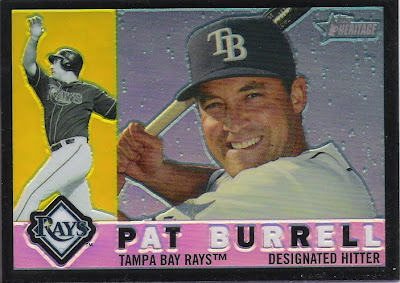 The guy they inked to a 2-year, 16 million contract last year is gone! I shouted loud against this move when it happened and I have supported my team while wishing there was a way to end this chapter. I even wrote a hoax post this April about the Rays trading Burrell. Well today they finally listened and it’s done. The Pat Burrell chapter in Rays history is done. Tampa Bay has 10 days to trade, release or waiver Burrell and they are still on the hook for the 9 million he is owed this season. Oh well. I personally would chase a rolling nickel down the street, but I would rather see my team take a 9 million dollar loss than have Pat the Bat kill another rally by grounding into a double play. I wanted to like you Pat. We are both dog owners, you share the same name as my Mom, but it wasn’t meant to be. I am gonna have a few drinks and celebrate your departure Pat. I wish you luck wherever you go. Oakland, Seattle, Toronto, Detroit-wherever. I hope you hit 40 homers next year, I really do. I am just glad you are gone. It looks like Hank Blalock will fill Burrell’s roster spot. I had my fingers crossed for Justin Ruggiano, but like I said, I am still waiting for my other two wishes and I think I will hold onto them until October… I don’t have too many cards of Burrell. This one is hands down the best one I have accumulated. It’s a 2009 Topps Heritage black refractor. It is numbered 13 of 60. It’s a beautiful card; I just wish it was of someone else. 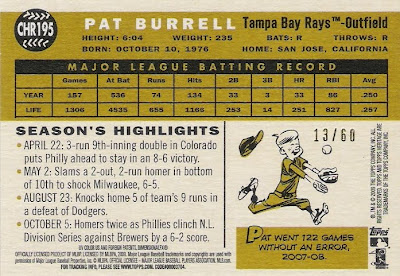 That is exactly how I felt when the Rays signed him. He’s a great hitter; I just wish they signed someone else. A big thanks to Chris from Stale Gum dot com for this sweet piece of cardboard and a bigger thanks to Andrew Friedman for finally reading my letters! Now, can we talk about re-signing Jonny Gomes? He's hitting .281 with 3 homers and 19 RBI and is perfect so far in left field... Just saying... Go Rays! No more excuses! Troll out.
Posted by Collective Troll at 12:58 AM