I haven't done one of these in a while... I haven't really posted cards in a while, but I definitely haven't done a 3 From 3 in a LONG time... Here are 3 SPECTACULAR looking cards. 2 have been on my desk for months, one just arrived. The one that just arrived came in a surprise package from Madding at Cards on Cards. He sent a number of postable cards, but the one I will show is the perfect leadoff card for this Brooklyn Dodgers 3 from 3. 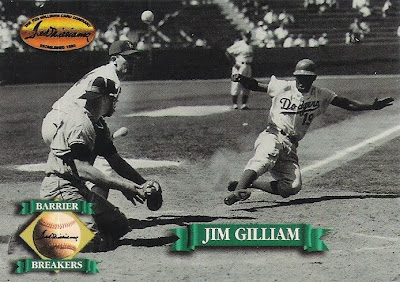 It comes from 1993 Ted Williams baseball card set, card #135 . I seriously need to chase the mid nineties Ted Williams sets, there is a ton of great looking cards in them and so many great pics of cool players who don't get near the amount of attention they deserve. Anyway, the subject matter is Dodgers infielder and personal favorite of mine, Jim "Junior" Gilliam. A former Negro League All Star turned 1953 NL Rookie of the Year, National League All Star and MLB World Champion. 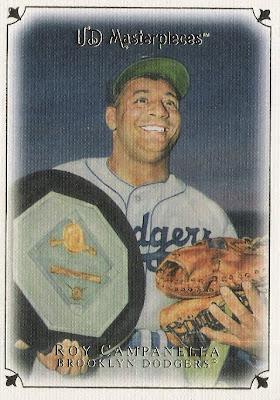 The second card of this 3 from 3 came from the GCRL Blog, many, many moons ago. I love it when a team collector shares a card of their team with you. It makes it that much more special.
This one features another former Negro League All Star, turned MLB World Champion, NL All Star and three time National League MVP. Of course I am speaking of Dodgers catcher Roy Campanella, shown here on this 2007 Upper Deck Masterpiece, card #23. I absolutely love his smile in this picture. "Its Good To Be Alive" was one of the first baseball books I read as a kid. It was written by Campy in 1959. What an amazing person he was! Definitely one of my all time favorites. I am working on filling a page of 9 Campy cards and this fits in perfectly. 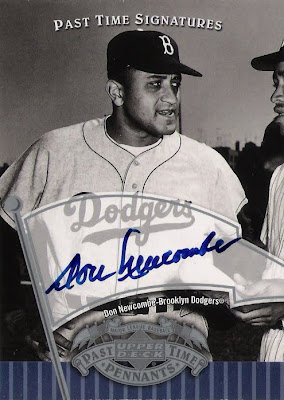 The final card in the package came to me from reader David nearly a year ago. He had responded to a post I made and said he wanted to send me something special and he didn't want anything in return for it. Well, this amazing card somehow got buried on my computer desk (next to the non-working computer) and it never got it's proper post and I never formally thanked David for this AWESOME gift. It is a 2003 Upper Deck Past Time Pennants, Past Time Signatures card of another Negro League All Star turned MLB World Champion, Rookie of the Year, MLB Cy Young Award Winner and National League MVP! He is also another all time favorite of mine, Don Newcombe and the card is autographed AND the auto is ON-CARD!!! I couldn't believe it when I got it nearly a year ago, I still can't. I love it! I am wondering something about this card, though. Newk is talking to someone who was almost edited out entirely. It looks like he is wearing Yankee pinstripes and has a moustache. Any ideas on who this could be?
Now I don't pretend to be a Dodgers fan, but the Dodgers teams of the 50s with Junior, Jackie, Newk, Pee Wee, Duke, Campy, Hodges, Oisk, Podres, Amoros and Furillo were definitely one of the most amazing collections of talented and awesome ball players ever... And I don't ever mind adding cards of any of those guys to my collection. I would never turn down a Koufax, Drysdale or Wills card either...
Anyway, a HUGE thank you to Madding, GCRL and David for these great additions to my collection. Keep em coming and I will start up a Dodgers binder... For now they go into the Negro League alumni book, except for the Newk, which has found its way onto the mantle above the fireplace (which I actually do use one month a year). Thanks guys! I love this hobby and I love this blog-o-sphere!!! Go Rays! troll out.
Posted by Collective Troll at 10:44 AM