A lot of bloggers have been writing lately about being in a collecting funk. Maybe not a lot, but more than one AND you can add my name to the list. So much going on that is pushing me further away from my cards and my computer. Sucks because blogging about baseball cards is the ultimate therapy to me. Anyway, today the Gint-A-Cuffs winner was announced. Congrats to Play at the Plate on winning it all and thanks to Mark aka the Commish for running it so well. I ended up being a dead beat on the Gint A Cuffs thing and feel bad about it. I still have yet to rip a single pack of 2010 Ginter, BUT that doesn't mean I don't own any. I have recieved three packages that included a bit of 2010 Ginter goodness... This was my first look, courtesy of Shellie Bee, AKA The Middle Child. Anyway, I think that EVERY single card from this set has been posted twice by now, but feeling left out I am gonna post up a few that she sent me. 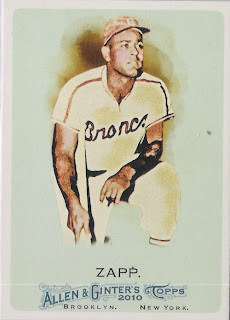 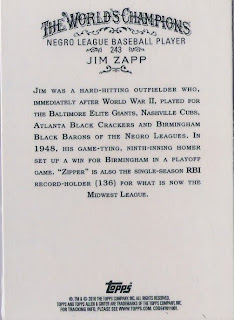 Next up is card #291 of a player I wasn't too familiar with, Ron Teasley 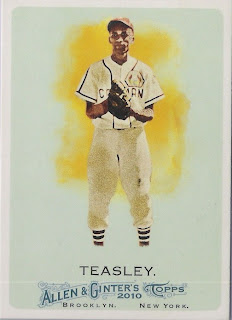 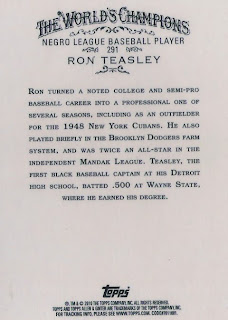 and finally the last 2010 Ginter gem in the package, card #104 of Newark Eagles infielder Mahlon Duckett. His name ROLLS off the tongue, I love it! 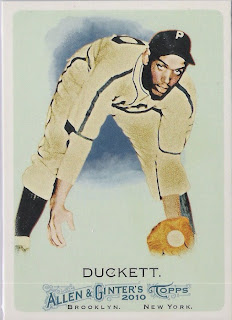 Duckett is heavily involved with the Negro League Baseball Players Association and is a walking history book himself. 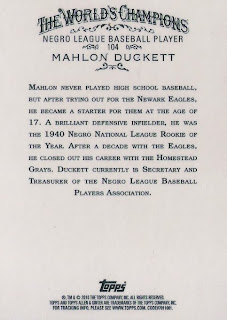 Thanks so much Shellie! Negro League cards are ALWAYS welcome here in Trollville. Oh, shipped 3 more packages for the group break today. I STILL need a few more addresses... Go Rays! troll out.
Posted by Collective Troll at 1:49 PM