Okay, rewind back to April 12th. It was almost 2 weeks ago when I read this post on Sports Card Uncensored proposing a topic for a Blog Bat Around.

my recap brief. The easiest thing to do is to click on this link to the BBA topic and read it yourself… The basic premise is that you are given $50,000.00 to spend however you like on eBay. Pretty awesome, huh? The only catch is that you only have 15 minutes to do so. The idea of a 50 grand card shopping spree is absolutely awesome, but imagine the stress involved knowing that you only have 900 seconds to spend it. I first read this topic two weeks ago and the rusty gears in my head have been turning ever since. I have read a whole bunch of shopping sprees on the other blogs and felt the excitement of the idea with each post. My time has been limited when it comes to posting; it has been even more limited when it comIf you read this blog, I am sure you read SCU too and are well aware of the topic, so I will keep es to eBay. Knowing I have 28 cents in my PayPal account gives me less motivation to spend any time over there. In fact it makes it VERY dangerous. There have been too many late nights where I have clicked on a BIN button knowing that I can’t possibly afford the item, but the deal seems too good to pass up. For that reason I may have promised someone that I would stay far away from eBay. I have kept my distance from that evil auction site, but with each post I read about this subject, I think more and more about my own shopping spree. SCU gave their readers one week to participate in the Bat Around. More than enough time for most, but not nearly long enough for a procrastinating Troll. In fact I am surprised that I was able to do it after only two weeks. I know I am too late officially for the Bat Around, but I really wanted to try it anyway. I had a 15 minute break planned from 9:45 till 10:00 PM last night and I decided that would be my time to go on a shopping spree. I told my wife I couldn’t talk far in advance. I filled my coffee up beforehand, I shut off my phone and made sure my computer had enough time left on its charge. I had a notebook, pen and a calculator ready. I also set an alarm to go off after 15 minutes AND I set the stop watch on my phone. The 15 minute time constraint is one of the most important things in this exercise and I wanted to make sure that I adhered to it. I bumped around on eBay a little earlier in the week. I didn’t “watch” any items or try to cheat-I went on to try and figure out specific search modes based on price. Normally I prefer to bid on actual auctions, set my max bid and hope it slips by. For this experiment I needed to be sure that I was only looking at Buy It Now cards and I wanted to set a minimum price so I wasn’t wasting time looking at 5 dollar cards. During my lunch break earlier in the night I made an outline.
On my notebook I had my intentions clearly mapped out. I wanted A LOT of things. More things than 50 grand could buy, but I figured it would be good to have an idea of what I wanted. I knew there were a few different sets that I wanted to hit hard, a few personal favorite sets of mine. I was going to be looking for 1948 Leaf, 1887 Allen and Ginter Champions, 1951 Bowman, 2009 Allen and Ginter Woods, silks, rip cards and 1/1, 1953 Topps, 1912 T202, 1909 T206 and 2007 Sweet Spot Immortal Signatures. I was also planning on picking up complete sets of Topps from 1958, ’59, ’60, ’63 and ’65. I wanted to find cool 1 of 1 cards of Carl Crawford, Evan Longoria, Brian Roberts and Jason Bartlett. I also really wanted to get certified autographs of Roberto Clemente, Jackie Robinson, Larry Doby, Cool Papa Bell, Willie Wells, Piper Davis, Sandy Koufax, Ted Williams and Satchel Paige. I wanted to get vintage, high grade cards of all of those guys too, plus Stan Musial, Joe DiMaggio, Ernie Banks, Bob Feller, Warren Spahn, Hank Aaron, Mickey Mantle and Willie Mays. I had a lot of things I wanted to get. I think I was taking this thing too seriously, but I don’t know when I will get the chance to “spend” $50,000. on cards again, so this was pretty serious. I wasn’t sure what the best method was to “purchase” cards for this, but I decided when I found an item I wanted I would WATCH it, copy and paste the URL and write down a quick description of the item and price in the notebook. That seemed fair to me, so that is what I did. When 9:45 rolled around I was waiting, the computer was on, I was already logged into eBay and as soon as my alarm went off I took a swig of coffee, a deep breath and I started searching. I will say that I considered the idea of just buying something really big like this awesome Babe Ruth baseball for $48,000.00, but I wanted to get in on the chase, fight against the clock and get the most bang for my imaginary buck.
I will post my purchases as soon as I get home from work later tonight… Like I said I know I missed the deadline, but I didn’t want to miss the fun. Stay tuned…I will show you one more card that I DIDN'T buy with my 50K. It's a great looking card, but 6 grand for an auto is too much even when playing make believe... I still had to show this because it really is a cut signature done right and I love the quote. It says "I want to be remembered as a ballplayer who gave all he had to give." There will NEVER be another Roberto Clemente! 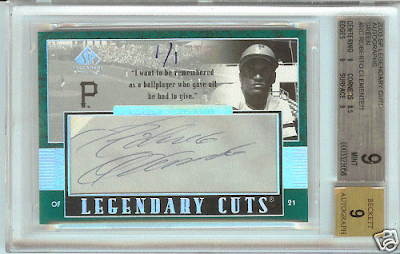 The 50 grand went quick, like in 15 minutes... I had never broke a sweat shopping on eBay before. It was intense. I will be at work until 11 PM Eastern, but I have a post scheduled to go up at 3:11 PM (My wedding anniversary is March 11th), check it out cuz there is a little contest and challenge and you can win cards! On a different note, I finally sorted through all of my new 2010 Heritage cards and made a list. I don't plan on buying any of this, but I wouldn't mind at least killing off the base set. Thanks for looking... Go Rays! Troll out.
Posted by Collective Troll at 11:57 AM