Sooner or later we all trade. Its a fact. I always wondered why I hadn't made a trade with Mike Pelfrey Collectibles before, but I didn't sweat it, cuz I new it would happen on its own sooner or later. Well, it finally did. Anthony, the biggest Pelfrey fan in the blog-o-sphere is slowing down on card collecting and card buying to focus on other interests. He had a HUGE trade bait post up of all sorts of autographed and memorabilia cards. Actually, I think he still has some left, so you might wanna head over there... Anyway, amidst all the goodies was an autographed card of former Devil Rays pitcher Ruddy Lugo. 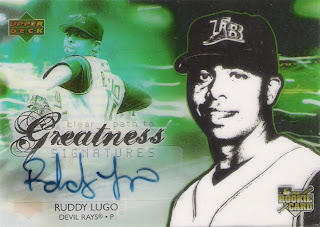 The younger brother of current Orioles second baseman Julio Lugo, Ruddy spent a year and a half in Tampa Bay and thus was on my radar for my autograph collection. I had sent a TTM request to him before with no. I have not got a response from his brother either... Anyway, with such a short big league career I didn't realize that Ruddy Lugo had any certified autographs out there. Who was I kidding? He was a third pick for the Brewers in 1999 and was a combined 11-2 for the Dodgers organization in 2002, so he was definitely on the prospector radar. Oh, as for how he ended up a Dodger. He was the player to be named later in the Marquis Grissom for Devon White deal. Anyway, he bumped around with several different teams before the Devil Rays signed him in 2005. In 2006 he appeared in relief in 64 games for Tampa Bay. He started the 2007 season with them, but was put on waivers and grabbed by the A's. In 2007 he had a combined perfect record of 6-0, but with a 5.40 ERA. He bounced around a little bit more, but has yet to make it back to the major leagues. He has been part of the Tigers system since 2009 where he is a starter with their AAA team in Toledo. Last year he was 13-9 in 25 starts. 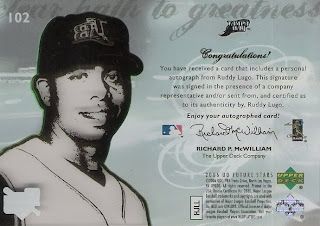 Wow, that a long description even for me... The short of it is I claimed the card, a 2006 Upper Deck Clear Path To Greatness Signature Series card of Julio Lugo from the trade bait page, Anthony and I exchanged a few e-mails, I had some vintage Mets he needed and I ended up with 3 sweet new cards for my collection. The Lugo was the only Rays autograph that I got, but not the only auto. 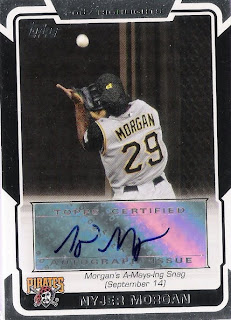 He also sent me this 2008 Topps Updates autograph of Nyjer Morgan. Morgan was a favorite of mine from his days at Pirate City coming up through the Pittsburgh organization. I don't intend on collecting him, but liked the idea of adding one of his autographs to my collection, plus I love the photo of his a-Mays-ing catch. 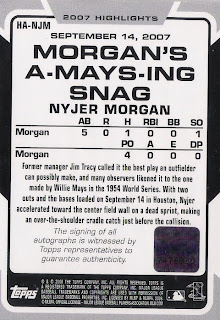 The third and final card in the deal was this 2009 Topps Heritage Chrome version of David Price. 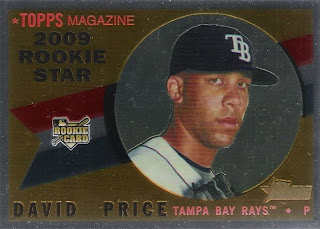 I am trying to get the complete Rays team set as chrome parallels. I don't know if this finishes it off, but it gets me pretty damn close. Thanks so much to Mike Pelfrey Collectibles for the trade! Go Rays! Troll out.
Posted by Collective Troll at 12:54 AM