A Collective Trol 3 From 3!

Its time for another old fashioned Collective Troll 3 From 3. This one features former Rays slugger Aubrey Huff. Until January of this year I did not own any “premium” Huff cards. He was never a favorite player of mine even though he had a few really great seasons in Tampa Bay. I think he still holds the team record for homers by an outfielder from his amazing season in 2003 when he started 102 games in right field for the Rays and hit .311 with 34 homers and 107 RBI. 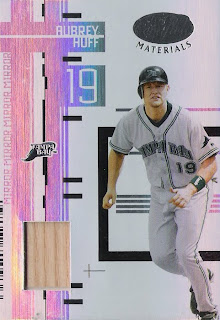 He also added 47 doubles, 198 hits and 91 runs scored. In his 7 years in Tampa Bay he topped 20 homers in 4 consecutive years and was a consistent part of the middle of the lineup. Perhaps his biggest contribution to the team came on his way out the door. He was traded to the Houston Astros in July of 2006 to give the ‘Stros a little bit of extra power down the stretch. That deal brought pitcher Mitch Talbot to the Rays along with super-utility-man Zorilla aka Ben Zobrist. Huff only spent one year in Houston before signing a huge free agent contract with the Baltimore Orioles. In 2008 he had his best year offensively for them. He batted .304 with 32 homers and a career high 108 RBI. 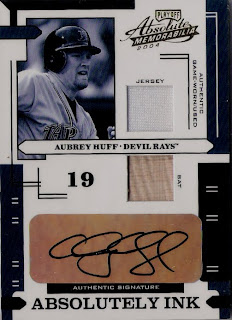 He also set a career best with 48 doubles and he won his first and only Silver Slugger Award that year at the DH position. Last year he was dealt to Detroit at the deadline but didn’t offer the Tigers much production. His numbers in Detroit were .189 with 2 homers and 13 RBI in 40 games. A lot of people thought that was the end of his career. Those folks would be wrong however. The management in San Francisco saw something in Huff and signed him right before spring training so far this year he is looking good. He is back out in the field at first base and is hitting .280 with 4 homers and 20 RBI and also has 10 doubles. He is second on the team in homers, RBI and doubles so far this season. I am happy that Huff found a team and happier that he is doing well. 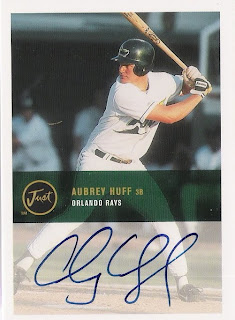 He is in the top-50 among active players in most batting categories and at 33 years of age I think he still has a few more homers in his bat. I am far from a Giants fan, but I root for anyone who came up through the Rays system. Fan or not I didn’t want to see his career end after that awful time in Detroit. I am glad that San Francisco offered him a shot at redemption… Wow, that was a lot more than I had intended on saying about Mr. Huff! Okay, since this is a three from three post I will mention the 3 cards I am featuring. The one on top ironically came from a Giants fan. I think he sent it to me 3 weeks before Huff signed on with San Fran. This card is from 2005 Leaf Certified Materials, card #11. It is serial numbered 24 out of 250. 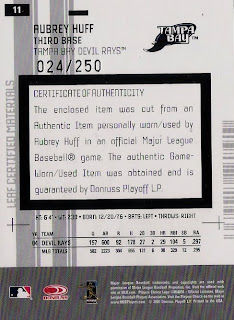 This was the very first non-base card of Huff I got. It came from Omega Wax and it only took me 5 months to get it posted! Thanks so much to Omega for sending me this one, I really like it. One day I will post up the Martin Dihigo card he sent along with it! Soon after I got my first Huff bat relic my homie Wicked Ortega from My Past Time I Love It! had to up the ante and he sent this gem. It is from 2004 Playoff Absolute, card #11 from the Absolutely Ink set. It is a TRIPLE-a Trifecta all in one. 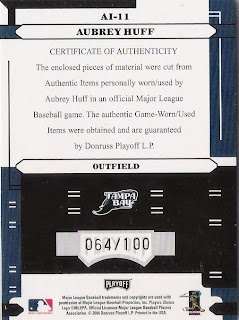 The card is serial numbered 064/100 and includes a tiny jersey swatch, a little bat chip and a nice bold sticker autograph. I really like the concept of mulit-relics and autos on one card. I think I have 4 like this and I think they all came from Wicked. I haven’t been hanging onto to this card as long as the bat relic from Omega, but it has been sitting on my desk for a few months… Oh, speaking of Wicked. He is desperately seeking cards of former Pirates infielder Rennie Stennett. There may be a reward involved if you can hook him up. He has his Topps checklist posted but I think this would be a great opportunity for a custom card creator to make a cool card and get it autographed. Just a though. Okay, back to Aubrey Huff-he has the floor right now… Last month I got my third Mojo Huff card in the mail from a reader, thus completing a 3 card lot and readying these bad boys for a proper post. It is a 2000 Just Minors ON CARD auto of the young outfielder. Huff played for the Orlando Rays (AA) in 1999 and that was the first stop that he showed his power potential-he hit 22 homers and 40 doubles for them and virtually duplicated those numbers the next year in AAA and from there he climbed to the big leagues. 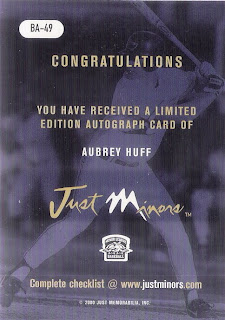 I REALLY like these Just Minors autographs. I like the simplicity of the design, I like that all of the ones that I have are from Florida teams that I have watched and I like the on-card-ness of the autographs. This one came from Drew (not the blogger) with a few other autographs that I will post up soon. My autograph list is not up to date and I have come across quite a few of late. I will create a proper list of Rays autos soon. As far as my quest to get an autographed card of EVERY member of the 2008 American League Champion team- I am getting VERY close. I don’t have everyone in a Rays uniform yet, but I think that JP Howell, Matt Garza and David Price are the only 3 I still need. I do plan on posting them all at once as a tribute to that magical team. If you are new to my blog, I am trying to get one autograph from EVERY player to ever play a game for the (Devil) Rays. If you have Rays autos from ANY year, get in touch! Thanks again to the 3 traders who provided the fodder for this 3 from 3 post. Omega, Wicked and Drew (not the blogger)-y'all rawk!!! Best of luck to Aubrey Huff on the other coast. My next posts will be trades from Roll Out The Barrel and Mike Pelfrey Collectibles, a '65 Topps League Leader on the Nitty Gritty and a pack rip of 1998 Pinnacle MINT on a Pack to be Named Later. Stay tuned! Go Rays! Troll out.
Posted by Collective Troll at 3:09 PM