My New FAVORITE Piece of my Collection and Some History on What Else I Collect...

It is time to unveil my favorite new oversized “card” that I picked up last weekend. Heres a hint-it isn't the Wade Boggs, you have to keep reading... This one blew me away and I still don’t even know what to do with it, but it hits the collector in me on many different levels. Many of use collect more than just cards and sports memorabilia. I personally have a bunch of different collections. Baseball cards have taken over as my #1 lately, but at a close second is record collecting. I love vinyl records and I have thousands of them. My taste in records is the same as cards. I don’t go crazy trying to find mint condition records to stuff in plastic and wait for them to rise in value. I find what I like and pick it up regardless of the condition and I actually play all of my records. I have records that have “list prices” in the hundreds of dollars range, but I play them and store them alongside the thrift store finds that make up the bulk of my collection. I have a lot of vintage vinyl and I collect modern (77 and up) punk rock vinyl and 7” records. 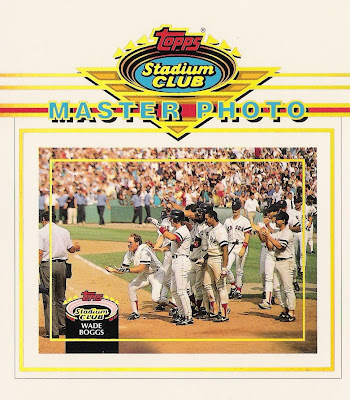 My wife and I run a record label together. It’s called Bacon Towne Records and we release only vinyl records of punk, hardcore and thrash bands. Our house is decorated with framed records, records nailed to walls and gig posters from our bands. I also collect roller derby memorabilia. This is a newer collection, but the more my wife and I get involved in the sport the more fascinated I am with its history and the history of roller skating in general. A few weeks back one of my wife’s customers brought her in a pair of aluminum roller skates that are stamped 1940. Nice! My Grandfather (Pop-Pop) on my Dad’s side was a lifetime Air Force man and remained a pilot after his retirement. 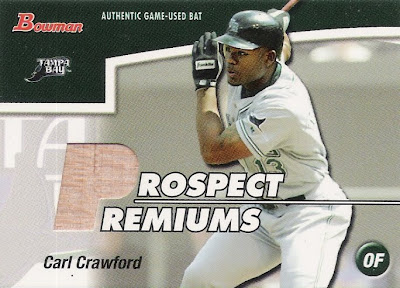 He was a pioneer in aviation, hung out with the Wright Brothers and Amelia Earhart and has the pictures to prove it. That began my fascination with vintage aviation. I don’t have any of that stuff at my house, but my family donated many of his pictures and uniforms and equipment to a museum in Connecticut, the rest of it is stored at my parent’s house. My grandfather on my Mom’s side was a lifetime machinist. That is the career path I have taken, too. Machinists love their tools and thusly I collect machining tools and gages. I recently bought a Starrett “Last Word” gage. Its number dates it to the 30’s and it still works! Okay, this is going somewhere… The last oversized “card” I picked up is this, a 1962 Sports Champions color record album of Twins slugger Bob Allison. 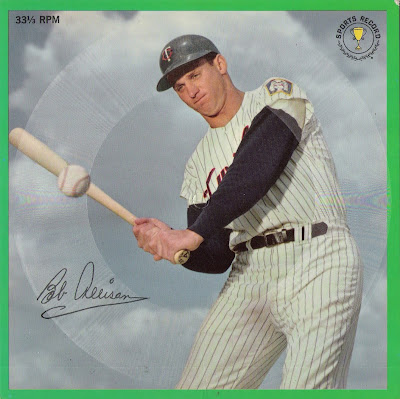 I had never seen one of these before and it hits my collection on multi-levels. First, it is vintage baseball. My top level in collecting. Second, it’s a RECORD! Third it is made by Columbia Records. That is where my Grandfather worked as a machinist for 45 years. Fourth, in 1959 my Pop-Pop worked in Washington at the Pentagon and attended nearly all of the Senators games. 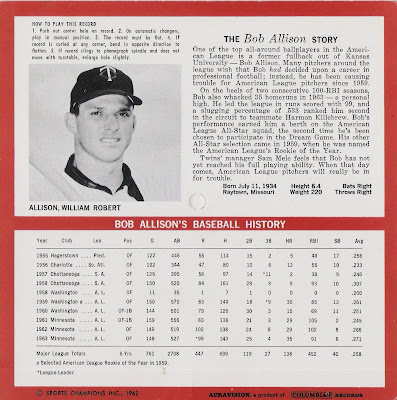 He and President Eisenhower had known each other for many years and attended several Sens games together. According to my father in 1959 they agreed that Killebrew and Bob Allison were going to make the Senators contenders. They did team up to make their team a force, but they did it in Minnesota, but my Grandfather (Pop-Pop) remained a fan and flew to the Twin Cities to watch his old team. In yet another connection, two years ago my wife was writing a paper on ataxia, the disorder that took Allison’s life. While researching the disorder she came across Bob Allison and spent a day talking of his accomplishments in baseball. He won the Rookie of the Year in 1959 for the Senators when he hit .261 with 30 homers, 85 RBI, 13 steals and a league leading 9 triples. The Sens still finished in the basement and Allison was overshadowed by Harmon Killebrew who had too many games to qualify for ROY, but led the AL in homers in his first full season in the big leagues. 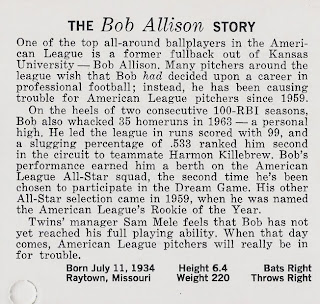 Allison was an All Star as a rookie and made the trip twice more. He paced the AL in runs in ’63 and topped 20 homers 8 times in his 13 year career. You can view all of William Robert Allison's stats here. I mentioned in the top of this post that I play all of my records. I have. Every single record in my personal collection (I sell new punk rock records) has been played. I don’t know if I should play this one though. It is 48 years old and has not yet been played. It’s a dilemma. Naturally I want to track down every single record from this series, but this one will always be my favorite. Oh, in an effort to break up all of the text up top I included my other two acquisitions... A '93 Stadium Club Master Photo of Wade Boggs (even as a Red Sox hater I really like this card!) and a 2003 Prospect Premium bat relic of Carl Crawford from '03 Bowman. I will probably post this one again cuz its really neat! The Boggs is on the block Sox fans! Oh, as an end note I also collect vintage camera gear and engineering supplies and beer signage. Thanks for reading! Go Rays! I love this game, I love my hobbies! Troll out.
Posted by Collective Troll at 2:56 PM