Tuesday Moring Musings, Blogging as Therapy and a Card from the Wicked Vault!

After work on Friday before I took a nap and before we left for Gainesville I sat down at my desk in the dining room (which has become my card room) and had plans to schedule a weeks worth of posts. I was staring at literally thousands of cards. Blogger kindness packages, trades with readers, trades with bloggers, purchases made online and at the card shop and a shoebox from Mom and Dad’s garage. I was too overwhelmed. 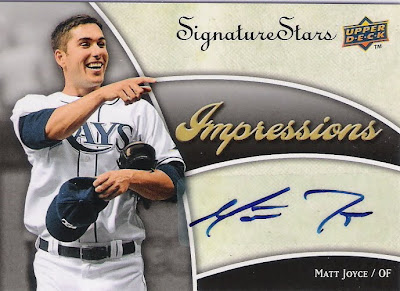 There was too much stuff. I can not use my computer at work anymore. I used to make the majority of my posts while I was at work, but now I can only think about posting. In my head I have passed 5,000 posts so far. Sometimes I get confused and think I actually posted them in reality and not just in my head. As anyone reading who blogs as well knows, blogging is therapy. I haven’t been blogging and I haven’t got my therapy. I really think I am losing it. I often apologize for not posting the great trades I have received. This is still a source of guilt, but more so I owe myself an apology for not continuing with my therapeutic blog sessions thus causing myself to go crazy and do so quickly… All that said I have two hours before I leave for work and I intend to see how much damage I can do. Expect to see something worthwhile on one of the 5 blogs I write for this afternoon. 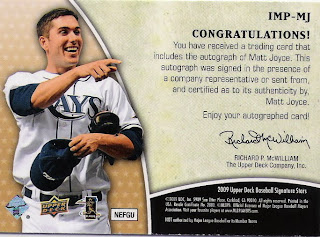 I don’t know which one, I will probably try and simultaneously write 3 posts and not finish any. Since I am here already I will end this one with a card. This baby comes from the legendary WICKED VAULT and is one of the many AWESOME cards that traveled to Troll-Towne from South Florida. 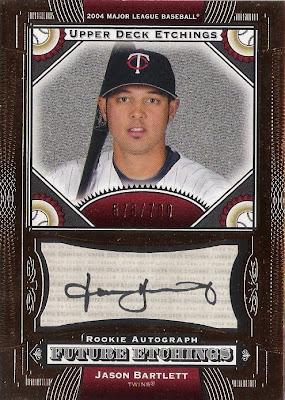 I have around 20 unposted autographs from Senor Wicked and he keeps sending more. If I had the time I would start a new blog simply called Cards I Got From Wicked Ortega. I could post everyday for the next six months based on what I have already. Anyway, this is one of many autos that he has sent and one of many autos of my favorite current player, Rays All Star shortstop Jason Bartlett. JB is currently in third place among AL shortstops in the vote for the All Star game. I still contend that he is the best at his position in the league, but statistically he has dropped off considerably since his breakout season last year. He is batting just .246 which is quite a drop-off from last year when he ended the season with a .320 mark. He has just one homerun, a leadoff shot against the Yankees in New York last week. He is still the field leader and offensive sparkplug of the best team in baseball though. I would rather he end the year batting below the Mendoza line with a ring on his finger than have him battle for the batting title on a losing squad. Anyway, I believe this is the 5th JB auto I received from My Past Time I Love It!. It was my 8th total. This particular card is among my favorites of JB as a Twinkie. The auto is neat, legible and fits in nicely with the composition. I like the design of this series. It is a 2004 Upper Deck Etchings, a rookie autograph “Future Etchings”. 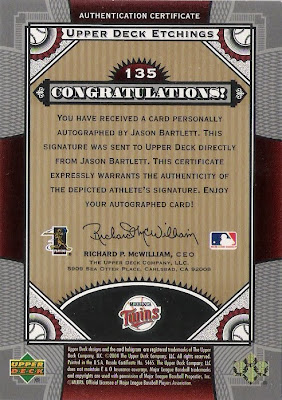 I recently received my 9th Bartlett auto in a trade. It is a pretty amazing card and I can’t wait to post that one so stay tuned! There will probably be a corresponding Joy of a Completed Page featuring 9 Bartlett autographs, too. Okay, thanks for reading my therapy session, it helped. A huge and ongoing thanks to my Homie and neighbor Mr. Wicked Ortega from My Past Time I Love It! By the by, the card at the top of the post also came from My Past Time I Love It! It is a Matt Joyce auto from 2009 UD Signature Stars. It probably deserves its own post, but I felt like killing two birds today. By the big smile on his face in the photo I would guess that it was taken during spring training in '09. Joyce didn't have much to smile about last year as he spent most of it in AAA. This isn't my first Joyce auto, but it is my first Certified one and I really like their choice of photo for this one. I think he is covering up enough of his jersey that this one could even work for 2010. When you flip the card you see that the folks at UD really really liked the picture, too. Double thanks Wicked! You rule!!! You should be getting a package from me today that will make you smile bigger than Matt Joyce in spring training! Keep your eyes open for more posting somewhere this afternoon. Oh... If the person who sent me the awesome 2010 Bowman Rays stuff last week is reading this, please get in touch. You can email me at bacontowne at yahoo dot com. The same goes for the future owner of the '85 Lance Parrish Super Card... Go Rays! Troll out!
Posted by Collective Troll at 1:25 PM