Well the Nuclear Bombshells won!!! The ladies kicked Sarasota Roller Girls butt for their first win of the season. My voice is still recovering. I take my last final tomorrow and then I might be able to blog on some sort of schedule… 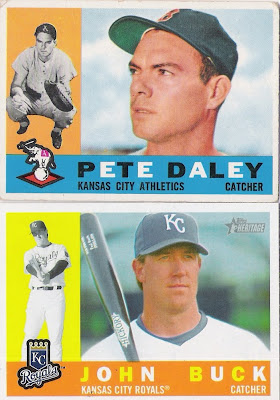 This is a feature I have planned for my other blog, The Nitty Gritty, but I wanted to introduce it here since this blog gets a little bit more traffic. I will be taking cards from the 50’s and 60’s and showing their Topps Heritage modern day counterparts. We will simply call it “Old vs. New”. Today’s Nitty Gritty Old vs. New is 1960 Topps card #108 of Kansas City Athletics catcher Pete Daley. He is going head to head against card #108 from 2009 Topps Heritage of Kansas City Royals catcher John Buck.

Topps did their research and made a great pick for this pairing. Both players are catchers from Kansas City. Both were at the 6 year point in their career. Both had career batting averages around .235 and both weren’t long for Kansas City when the cards came out. 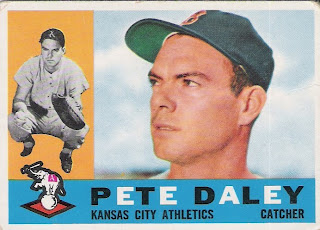 Pete Daley, shown in a Boston Red Sox cap, played with the Sox for 5 years backing up Sammy White. He played for the Ted Williams led Boston teams that never could catch the Yankees. After the 1959 season he was traded man for man to the Athletics for relief pitcher Tom Sturdivant. The following season he was grabbed by Washington in the expansion draft and retired after that season. His final number line is .239/18/120. During his one year in KC he hit .263 with 5 homers and 25 RBI in 73 games. 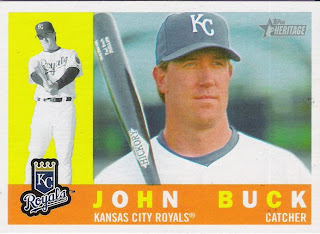 John Buck hit 3 homers on April 29th against the Athletics of Oakland. That power show came from Buck in a Blue Jays uniform. He too left KC the year after this card was printed. Buck has had a seven year career like Daley and his career line is .236/75/273. He has power, always has, but has the low batting average and frequent slumps to go along with it.
All in all Topps matched these two players well. The edge goes to 1960 though. Even though he is the wrong uniform, it wins because of the catching pose on the side. Plus vintage nearly always wins. 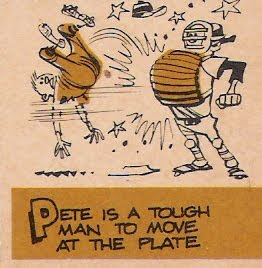 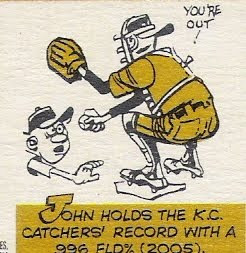 I hope y’all enjoy this format. In the future there might not be so many words, just the two cards side by side. You can be the judge. Go Rays! Troll out!
Posted by Collective Troll at 1:26 PM