A Homer's Humble Pie, A Blogday and a Contest...

I wanted to offer a little contest to celebrate Dallas Braden’s perfect blanking of the Tampa Bay Rays. It was the 3rd time that the Rays have been no-hit in their short history and the second time in as many years that they were on the wrong side of a perfect game. 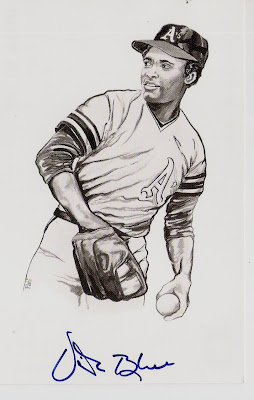 Since all of my Dallas Braden cards have long been traded away, I thought I would offer up this autographed postcard of Vida Blue. Blue won the Cy Young Award and MVP in 1971. He was also the Sporting News Pitcher of the Year that year and won the Award again in 1978. He was a 6-time All Star and won 3 World’s Championships over his 17 year career. He won 209 games and he pitched a no-hitter for the Oakland A’s in 1970. He missed having a perfect game however. In the 4th inning he allowed a baserunner. Name that baserunner, his team and how he reached base in the comments. I will randomize the correct responses and announce a winner on Friday.
I have 2 copies of this signed postcard. One will be a prize, the other is up for trade. I collect Rays autographs, Topps Heritage SPs, 1965 Topps, 1964 Topps Giants, Buck O’Neil, Carl Crawford and Danny Tartabull. Make me an offer if you are interested. These were signed at a card show in Hernando, Florida in 1999.
Oh, by the way... The other reason for a contest is this. On Saturday May 8th the blog you are reading, the Collective Troll turned 1. I wanted to thank those of you who emailed me congratulations. I had totally forgotten about it, so thanks for the reminder! The contest thus becomes a birthday contest, along with some humble pie for a homer... Thanks to everyone who has read this blog over the past year, y'all rock! Also, I have got many trade packs in the last week that I need to post, but I have updated my wantlists, so check em out! Good luck to all in the contest. I will probably include some other oversized cards as a bonus for the winner. Perhaps something from this set or an unopened pack or two.
Don’t forget to check out a Pack to be Named Later and the Nitty Gritty for more Trolly goodness. Go Rays! Troll out.
Posted by Collective Troll at 2:30 PM