Back From Gainesville With a Bunch of Goodies!

I don’t know if anyone noticed my absence from blogging over the past few days. Probably not as my presence has been minimalized with my new job, but I did have a reason… The Bradentucky Bombers had a road bout in Gainesville, Florida on Sunday May 23rd. G-Ville is around 200 miles away from my towne of Bradenton. Anyway, we went up very early and I checked the towne of Gainesville out a bit. I found a card shop and spent a little bit of money working on my collections. 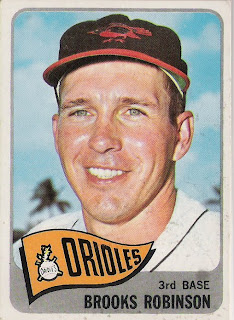 I grabbed the ’65 Brooks Robinson that I posted on Saturday and picked up 21 more ‘65s at a very fair price. I also bought 29 random cards from 1961 Topps which will be posted as Old Vs. New on the Nitty Gritty. The shop didn’t have much in terms of vintage, nor did it have many current autographs, but it did have plenty of odd ball stuff. I picked up my second (hopefully of many!) roller derby card. 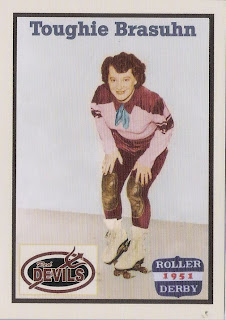 I don’t know what year this card is from, the clerk thought it was from the 90’s and it is made by Superior Trading Cards. It isn’t nearly as awesome as a SlangKo roller derby card, but it is still pretty awesome. It shows one of derby’s biggest stars, Ms. Marjorie Brasuhn, AKA Toughie. She was the Captain of the Brooklyn Red Devils in the 1950s. 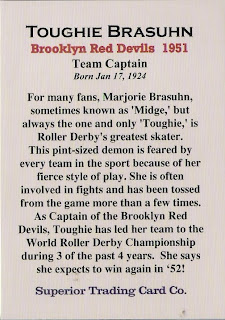 I never met Toughie, but I have interviewed several of her former peers and all accounts say she really earned her nickname. Along with the derby card I added another biggy to my biggest PC. It is a 1993 Topps Stadium Club Master Photo of then Yankees designated hitter Danny Tartabull. I’ve always liked the angle of this posed shot of the bull in front of an empty batting cage. The master photo is the same size as a regular card, but has the TSC logo and a lot of white empty space framing it. 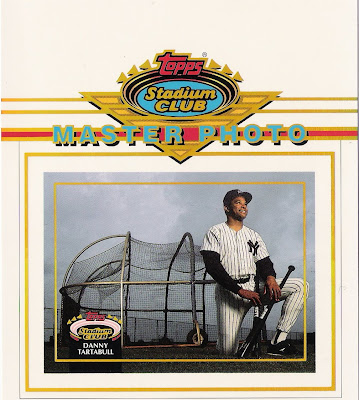 The back of the card is blank. I am not sure how I feel about that. I do still need the card sized redemption card that would have been exchanged for this one. Trying to maintain a size balance in the binder I picked up another master photo of his teammate at the time, Wade Boggs. After buying those 2 the shop clerk asked if I liked oversized cards. I responded affirmatively with a big hell yeah hoping that he would return with a pile of ’64 Topps Giants. He didn’t, but he did produce a rather large stack of random oversized cards from the past 30 years. I picked up some ’81 Topps Super, a few from ’86 Super and another copy of this card from 1985 Topps Super. I had posted a pack rip of this for a Pack to Be Named Later Earlier this month. Lance Parrish was in the pack and a reader commented that he would like the Lance Parrish card if I was willing to part with it. 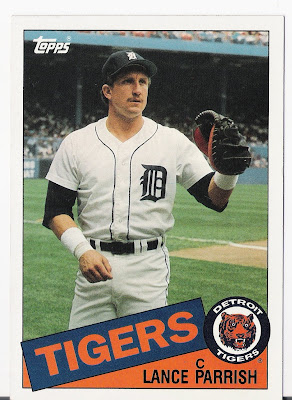 Normally I would have sent it to him already, but this pack was part of the group break so technically the Roof God owns the card as he chose the Tigers in the break. Well it all worked out because All Star Cards and Comics had a copy of the Parrish card and I picked it up cheap, so if you still want the card send me an email with your address and I will send it on its way. Anyway, it’s nearly time to leave for work and this story is becoming far longer than I had intended… I picked up quite a few more oversized cards and most of them I already have homes in mind for. I grabbed some very cool 2008 Allen and Ginter cabinet cards from the Historic Battles series which I will post another day. 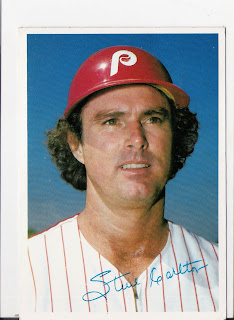 He also had Toys R Us master photos. I picked up a few of those, too, but he didn’t have the Tartabull so I still need that one. The last LARGE card I will show off is a giant from 2007 Topps Turkey Red, Cabinet Card #DP-NM. This cabinet card is just an oversized version of the regular Dick Perez painting from the set, but it is an amazing rendering of a pretty cool player. I would say this card is suitable for framing. I will also say it would look way better autographed. 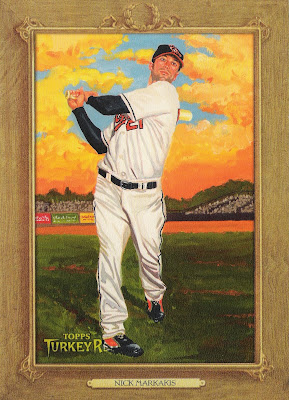 I will ALSO say that I am not so in love with this card that I wouldn’t be willing to trade it. Until this weekend I didn’t know that Turkey Red cabinet cards existed. Now I know they do and I own one of them and naturally I want more. I don’t know for sure who made it to this set, but if there is a Carl Crawford version I NEED it! I also wouldn’t mind swapping this one for Brian Roberts or Akinori Iwamura. Any takers? Anyway, this wasn’t all I picked up. The store had some very neat stuff in it and the guy gave me a great price on everything. I left a very satisfied customer with quite a few large and normal sized cards. 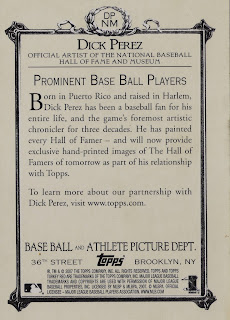 Some stuff for my PC and some other stuff that will be heading to Texas and the land of Cards on Cards later this week. 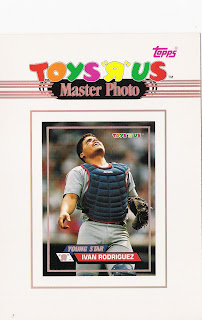 Oh, you may have noticed that there is a new header up. To learn when and where this card came from you will have to check out a Pack to be Named Later. I really LOVE the Sombrero custom and it will return soon, but I also like the idea of rotating the header picture every week to keep things fresh. Oh, the reason that I was in Gainesville wasn’t just to buy cards. We had a derby bout, too. The fans in Gainesville are AMAZING! Very knowledgeable and vocal and they have a great team to root for. Their announcer Glyph Huckster is a good friend and it is always great to work with him. They had a really big and nice rink and drew a great crowd. The crowd was silenced pretty quickly as the Bombers had their best bout of the year. Everyone was synched up perfectly and we brought our A game. We got off to an early lead and held it for the whole game and won by our largest margin on the road ever. The final score was Bradentucky 175 and Gainesville 65. Gainesville actually played quite well, we just played better! The hospitality they showed us in the after party was pretty amazing too. We had a private set-up behind the bar in a really swank bowling alley. It included 4 private lanes for bowling, buffet food, 4 movie sized big screen TVS and lovely waitresses bringing us all the free booze we could drink. It was decadent! I had a blast, but it is really hard to return to reality the next day. I felt like a star last night, but now I need to rush to work to clock in to my stupid job. Thanks for reading! Go Bombers! Go Rays! Troll out!
Posted by Collective Troll at 2:59 PM