Congrats to Dallas Braden and Some More Overdue Stuff... 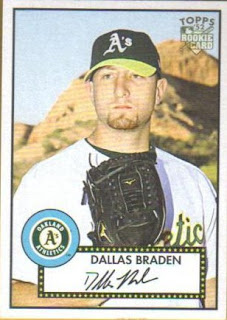 I didn't get to watch the game, I wish I did. Watching a perfect game is unforgettable even when your team is on the losing end. No Rays pitcher has ever thrown a no-hitter before never mind a perfect game. I would love to see that someday, but for now I am pretty happy that my team has the best record in baseball. As long as the Rays are winning more often than they lose, I don't really care if they get blanked every now and then... So a huge congrats to Dallas Braden and the Oakland A's. I don't think anyone expected the A's to be sitting in second place in the West at this point, I am really happy for the team. I love seeing over-hyped teams lose, but I love to see the underdog rise up. Congrats to Oakland and Dallas both!

Onto a different topic... An update for those who are in for my long-overdue group box break. It was supposed to be "Spring Break-Packs Gone Wild", but the spring is passed and I missed it. I am not going to make excuses, but I will apologize. I feel horrible about this and it is weighing heavy on me. Time has been hard to come by for me. The break WILL happen. It will start this week. An extra push came this weekend when I found this collection on my doorstep when I got home from work on Saturday. On top of the hundreds of packs already slotted for the break, I think we can add a few more... 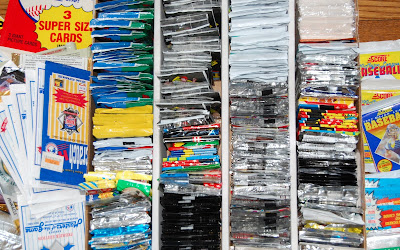 The plan remains to one of each for A Pack to be Named Later. I still plan on doing that. Many of these new packs are non-sports, football, basketball and soccer. These will have to be claimed when I post the breaks of each. Anyway, keep on checking back with A Pack to be Named Later and I think you will see some posts from your friend the Troll. Thanks to Mission Mary Position, Kelly and Frank, y'all rawk!!! Go Rays! troll out.
Posted by Collective Troll at 12:56 PM