He Was Right on Time...Unveiling and Explaining a Player Collection

So earlier today one of my favorite blogs, Play at the Plate dropped an awesome and thought (and comment) inducing post. His question was simply “What does it take to get into your player collection?”. I wrote a book in the comments section about my fandom for Danny Tartabull. 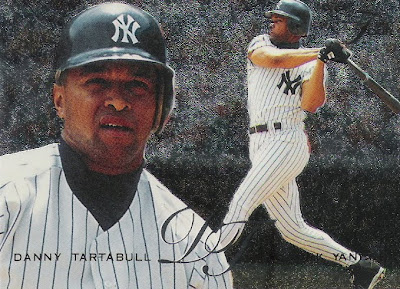 He wasn’t the first player I collected, that title would be shared by Steve Carlton, Hubie Brooks and Tim Raines Sr., but the difference is that I still collect Tartabull and always will. A while back I tried to have my wonderful readers choose a new player for me to collect. That ended in a tie. I guess that is appropriate because a personal collection is very personal. After the tie on the poll I went to my best friend, my Wife for advice. 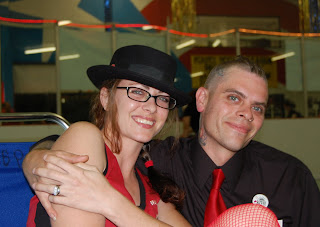 Although she isn’t a card collector herself, she supports my obsession and after the poll and all of its ensuing confusion my lovely Wifey stood out as the voice of reason. She said simply “I thought Buck O’Neil was your favorite. Why don’t you just collect him?” Well, I explained to her that when he played they didn’t make cards of him. I wanted to collect a player with some regular Topps or Bowman or Fleer issues as well as current retro cards and oddball stuff. 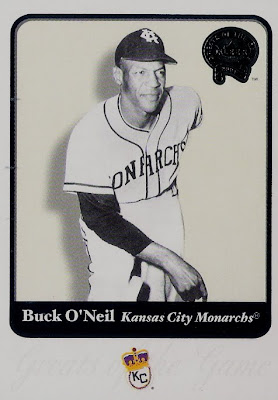 I never really considered Buck for the collection because of that reason. Even though he had a long and storied career with the Monarchs as a player and a coach, he never appeared on a card. While he was coaching with the Cubs in the 60s, he also got snubbed out of a card. It really sucks. It’s deplorable and embarrassing really. Buck dedicated his entire life to baseball, but didn’t appear on a card for the first time until he was already retired. Anyway, my Wife was the voice of reason and clarity. I don’t think she realizes the can of worms that she opened though. I honestly don’t know how many cards that Buck has or how many more will be made. I know there are at least 9, so I can fill a page which is good. Like I said, there are no regular issues from Topps or Bowman or Goudey or Leaf from his playing days in the 30’s and 40s or his coaching days in the 40’s, 50s and 60s, but there have been a few cards made of him in the late 90s and 2000s. I have 5 cards now and have them randomly spotted throughout this post. 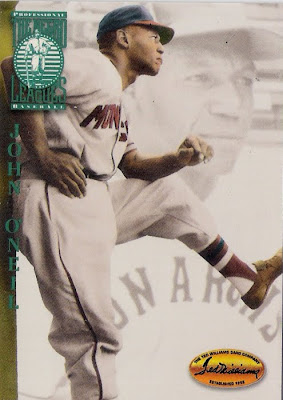 I know the first card I got of Buck was from Wicked Ortega and is from the awesome 1994 Ted Williams set. Prior to that I didn’t even realize that he had any cards. Since then Padrographs, Reds and More and Play at the Plate have hooked me up with more Buck cards. A reader hooked me up with this Sports Illustrated autograph and I bought my new favorite card of Buck myself from an auction site. 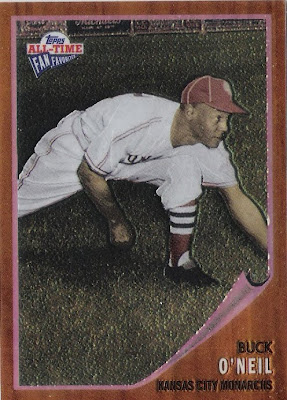 Buck O’Neil on a 1962 Topps card, plus it’s a REFRACTOR! I love it! Aside from the obvious reasons that I am a fan of Buck, here is my story… Like many people my main introduction to Buck was his appearance on Ken Burns’s baseball. From there I ran to the store to get his autobiography “I Was Right on Time”. 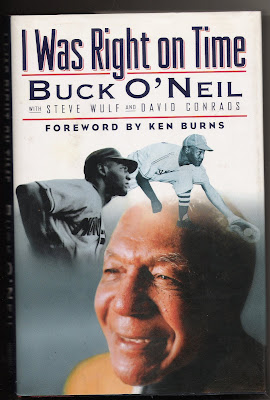 I read the book at a rough time in my life and it really inspired me. Buck’s kindness and love of life really touched my soul. I read it and read it again. From there I tracked down more books on players that Buck referenced. I had met him briefly at autograph signings before, but never got to know him. 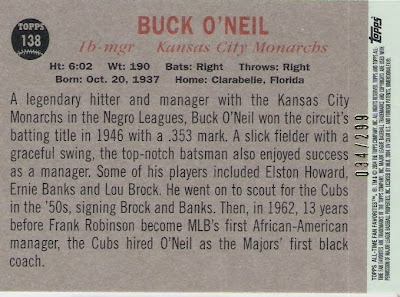 In 1998 I had read that Buck O’Neil was going to throw out the first pitch at a Devil Rays spring training game in Sarasota, his home town. I was at work and during lunch my boss asked me what was wrong. I explained that Buck O’Neil was going to be at the game, but that I had to work. My boss gave me the afternoon off and I raced to Ed Smith Stadium. 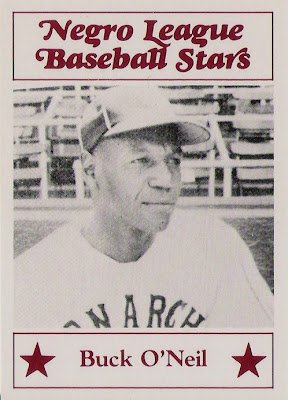 I lurked around and I saw Mr. O’Neil waiting in the aisle to throw out his ceremonial pitch. I introduced myself and told him how much his life spoke to me. He said “What are you waiting for, give it up” and gave me a big hug. 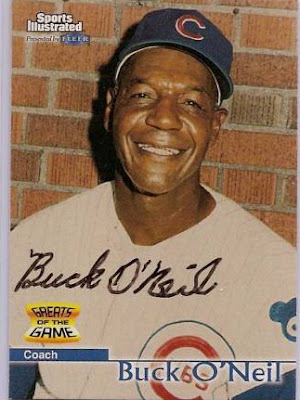 I was dirty from working all day, but Buck didn’t care. That moment meant a lot to me. I watched him start the game off and waited for him when he was done. We chatted for a bit and exchanged phone numbers. I nearly had a heart attack when he called me a week later and asked if I wanted to join him for a game. From then a friendship, not just a fan obsession was born. Buck spoke a lot and I listened and hung on every last word. 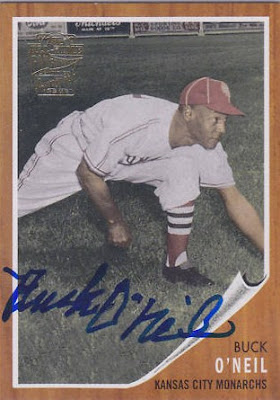 He taught me about the game. The modern game and the way things were when he was my age. He invited me to attend a reunion in Kansas City at the Negro Leagues Museum and from there I met many legends that I only read about. I am proud to call him a friend and I am not shy about calling him a hero either. Anyway, I had never considered collecting his cards, but I can’t think of a reason not to, can you? For me Buck O’Neil will live forever. . If you aren’t familiar with Buck O’Neil, the man was amazing and I am honored to call him a friend. He wrote a pair of books and I highly recommend checking out his first autobiography, “I Was Right On Time”. 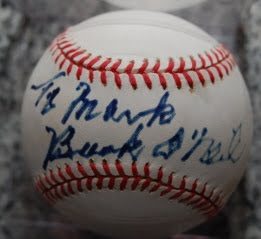 If you are in the Kansas City area, checking out the Negro Leagues Museum is also highly recommended. There is an amazing life sized bronze statue of Buck there. Thanks for reading. Buck O’Neil forever! Thanks to everyone who has sent me Buck cards already, please keep 'em coming! Thanks to my beautiful wife for the idea and thanks to Brian for the post inspiration! I also owe a thank you to Madding from Cards on Cards for the Bull card at the top of the post. Go Rays! Troll out.
Posted by Collective Troll at 1:52 PM