Killing 3 Birds With One Stone...

In my last post I pimped three contests that everyone should enter. In this post, I am going to do the same thing with a one-card post that celebrates all 3 blogs... This is card #219 from 1956 Topps showing Braves pitcher Lew Burdette. Why am I showing it? 3 reasons... First, it is a Play at the Plate card from 1956. That seems to be one of the most enjoyed things by readers of the Play at the Plate blog. I don't know if he owns this card, but I hope he gets it someday because this one of my favorite '56s of all time. 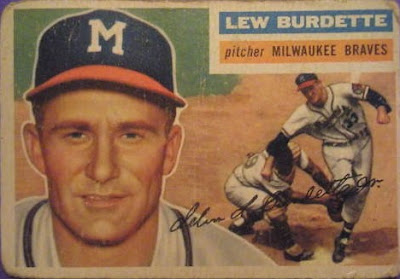 It is a play at the plate featuring a pitcher which is awesome. I have owned this card for longer than most of my (3) readers have been alive. In fact, Hackenbush is one of the few bloggers who has been collecting longer than me... Why do I love this card? Just look at it. It shows Burdette before he became a household name and starting making records. It illustrates the non-typical image of a pitcher trying to score. I hope that PatP gets this one because of his impeccable researching skills. I have always wondered who the opposing team was and whether Lew scored or not... He has scored some pretty big runs over his career. In 1960 he no-hit the Phillies, beating them 1-0. The only player to safely cross the plate was Burdette himself. The card also shows a golden time in baseball and in America. I wasn't alive then. My Dad was just a boy in '56, but he went to the World Series in 1957. Not as a player, just a fan-he was 12. He saw one of the most remarkable performances by a pitcher ever. The Braves beat the Yankees (which could be a preview of this years contest) and Burdette was the MVP. He was 3-0, pitching 3 complete games, 2 of them shutouts. In 27 innings pitched he struck out 13 and gave up only 2 runs. A few years later he was the winning pitcher in one of the best pitched ballgames in history. In 1959 Burdette pitched 13 innings of shutout baseball against the Pittsburgh Pirates when the Braves beat Harvey Haddix, who pitched 12 PERFECT innings. How does this tie in to Can't Have Too Many Cards and his contest? Well, no one knows how old he is. That is part of his contest - guessing the year of a black and white class photo of his. I wonder if he is old enough to remember Lew Burdette pitching 24 consecutive shut out innings against the Yankees in the World Series? Could be... Obviously this card ties into the contest at Great Orioles Autograph Project because his contest involves picking the winner of the World Series. In 1957 not too folks thoughts Burdette and his Braves could stop the mighty Yankees. They did. I think the Twins can stop the Mighty Yankees in the first round - with Delmon Young on their side, they can't lose! Okay, got to show off a favorite card AND pimp 3 great contests a second time... Oh, speaking of contests... Once I finally ship off the last cards from the group break, there will be a good ol fashioned contest here at the Troll. I am nearing 100,000 hits, the Rays are on the brink of making history, I am hoping for 150 followers, I will someday organize and count my Carl Crawford collection, I am getting more and more cards from the 1930s and 40s which ALL come with looong stories, I am one page away from sponsoring 20 different player pages on Baseball Reference dot com, I am getting close to finishing quite a few sets (wantlists are uptodate!!!) and I am generally excited about this game and this hobby... So much to be thankful for and happy about! Stay tuned! Games start tomorrow... Don't know if I can afford to go to a game in the first round, but I am working extra overtime to guarantee a trip to the ALCS! Enter these contests please! Don't make me drop a 3rd post about it! Go Rays!!! WIN! troll out.
Posted by Collective Troll at 2:27 PM