A Trade Post of EPIC Proportions or A Trade Post That Doesn't Suck OR The Tease is Over, This is the Real Deal!!! 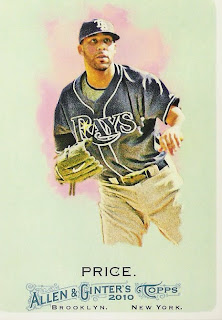 Greetings Trollites! So often I tease a post and then I see something sparkly and completely lose focus. When that occurs, so does THIS. Today is different. I promised to reveal the contents of the Padrographs package and I am going to do just that… You might want to grab a beverage and brace yourself - this is a LONG one...

The package begins with a bunch of wrestling cards from 1991 Impel. Rod said they were solely intended as packing material and he probably should have shredded them, but I thought they were kind of neat. Honestly when I opened the box and saw them, I thought Rod had BIPPED me AGAIN, but I ended up laughing my ass off reading the card backs. Here are a couple of the highlights. First is a card of “Steiner Brothers” that shows 1 person (Steiner Brother?) and a puppy. 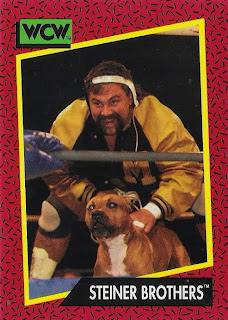 This card actually got me thinking about a new genre collection – cards featuring dogs. I just might do it. 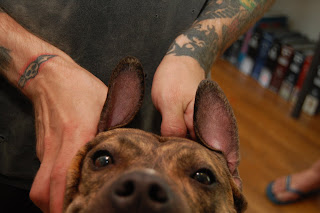 I like this one because the featured dog looks quite similar to my puppy, Emma. The back of the card shows 2 humans, but mentions dogs. 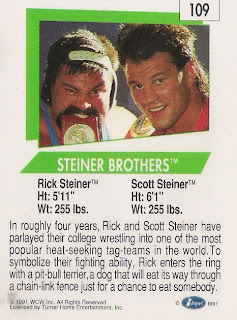 It says “Rick enters the ring with a pit-bull terrier, a dog that will eat its way through a chain link fence just for a chance to eat somebody.” Wow. My pit bull has NEVER eaten through a chain link fence, nor has she eaten anyone. What is wrong with her? She does nap on the couch – which is totally not allowed. Anyway, I picked 2 more wrestling cards to show off. Since this is a sports card blog, I went with 2 former pro football players turned wrestlers. 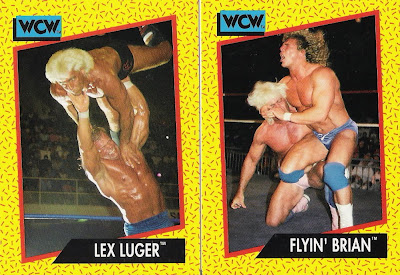 I should have scanned Doom, AKA Ron Simmons, but instead went with Lex Luger AKA Larry Prohl and Flyin Brian AKA Brian Pillman. Prohl played for the Tampa Bay Bandits of the USFL (with Ron Simmons) and Pillman spent time with the Cincinnati Bengals and the Calgary Stampeders. Both of the cards show the featured wrestler tangled up with Ric Flair who was only 68 years old back in 1991. I wonder if Flair could throw a knuckle ball, too…
Beyond the wrestling cards, aka packing material, there was actually some GREAT stuff. There was a stack of 2010 Allen and Ginter which spanned my two-main collections – Rays cards and Negro League players as well as the oddball like a Revolving Door. 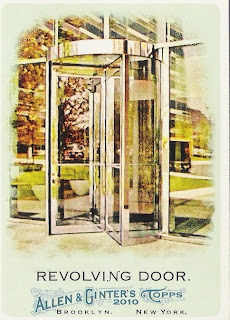 I am going to save most of the Ginter cards for a MONSTER GINTER post showing off all of the A & G cards I have received this past month or so which came from legends like Night Owl, Reds and More, Padrographs and more. 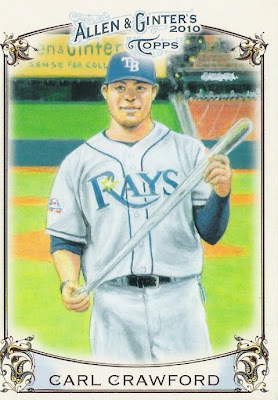 One card I will show today is this Baseball Sketches card of Carl Crawford as the 2009 All Star Game MVP. I have been hoping to get this bad boy for a while. I like the Allen and Ginter billboard behind him. Very cool… 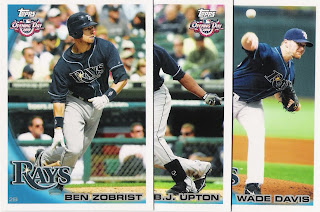 There was a number of 2010 Topps Rays as well as 2010 Topps Opening Day Rays cards. I am probably pretty close to filling the team set, but haven’t got everything together just yet… I still don’t know if the Rays mascot Raymond is included in the mascots insert set. If so, I NEED that card! 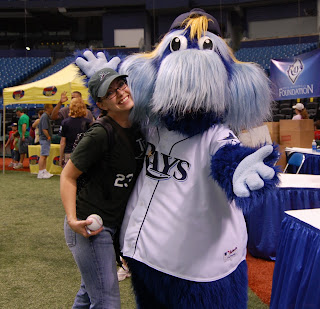 He also sent along some cards from 2010 Topps Pro Debut. I have yet to see this product for sale and I think these are the first cards from it that I have seen in person. It has the same design as 2010 Topps, but with the player’s minor league team logo. I really like this idea a lot, but at the same time wonder how many cards I need of a teenaged draft pick playing in the rookie leagues… 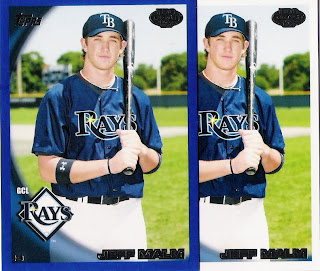 Jeff Malm for instance, was an 18 year old with 7 pro games under his belt when this card was made. He might be the future, but I don’t know if I am that patient. I do like color parallels regardless… 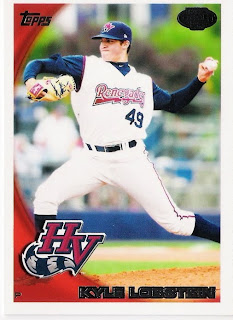 He also included this card of young left handed pitcher Kyle Lobstein as a member of the Hudson Valley Renegades. This kid has promise, but is still about 5 years away from a sniff at the big leagues. This makes me very curious about who else is in this set…

As is typical, Rod-rograph included a number of cool Negro League cards from 1993 and 1994 Ted Williams. Sadly, I was too lazy to scan these and you will have to wait for another day to see them. I did scan a couple of cards that he sent from the 1986 Larry Fritsch Negro League Baseball Stars set (wantlist coming soon!). 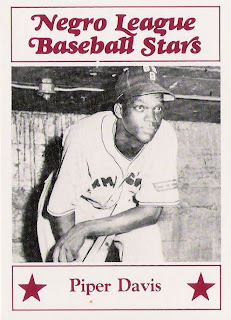 Rod had sent me a starter set of over 100 of these cards back in January. I am chasing this set, so get in touch if you have dupes! This set isn’t of the highest quality, BUT has some AWESOME players in it who just don’t have any other cards. I scanned a couple of stars from the set. First is Piper Davis, an amazing hitter who could play all 9 positions and manage, too. He was also the first African American player signed by the Red Sox organization. I also scanned this card of one of my fav players of all time, Luke Easter who is shown wearing a Padres jersey… Very surprised a Padres fan would give up this one! 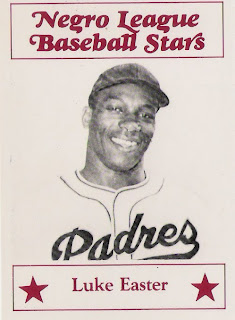 Since I am running out of time before work I am going to fast forward to the BEST CARD IN THE PACKAGE… A card so awesome that I can’t believe I own it, I really can’t believe another blogger sent it to me and I totally didn’t expect to find it sandwiched between a bunch of wrestling cards in this surprise package. This is a card that I have bid on soooo many times, but never went above twenty bucks on the bid and therefore never won it. It’s a card that another blogger might call an “Unpossible Autograph”. Yeah, I just couldn’t believe it when I saw it. The card is from 2001 Fleer Tradition, it is part of the Stitches in Time insert series that features autographs of players like Ernie Banks, Joe Black and Buck O’Neill. It is easily one of my favorite sets of all time because of the great players it includes. The card that Rod soooo generously included features and ON CARD AUTOGRAPH of Artie Wilson. 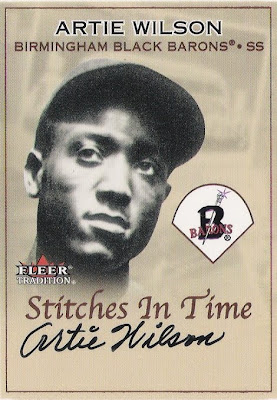 Holy freaking crap!!! I can’t believe it! Artie Wilson is a player who is in the Pacific Coast League Hall of Fame, but BELONGS in the MLB Hall of Fame. He was the premier shortstop of the 1940s where he played for the Birmingham Black Barons. He was the starting shortstop in the East West All Star Game 4 timed from 1942-’48 and his BBB won 3 League Championships. He batted .402 in 1948 making him the last player to top .400 in a Major League. He was a legend in the Pacific Coast League (AAA) playing for teams like the San Diego Padres, Seattle Rainers and the Oakland Oaks and winning 4 batting crowns in the process. In 1950, with the Oaks, he batted .311 with 31 steals and scored 168 runs!!! Over his 10 year minor league career he topped the 300 mark 6 times and owns a career average of .312 with 1609 hits, 780 runs scored and 160 steals. He did get a shot at the big leagues in 1951 with the Giants. 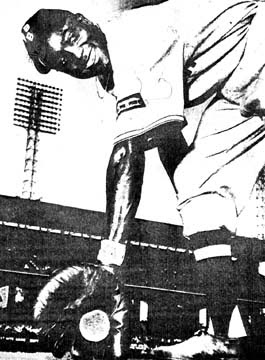 He made the team after a fantastic spring, but played sparingly and only stuck with the team till May of that year. When he returned to AAA his roster spot was taken by young centerfielder Willie Mays, a player that Wilson had mentored since Mays was a teen.
I do honestly believe that Artie Wilson is a Hall of Fame caliber player. He was the top shortstop in all of baseball in the 1940s. Great defense, speed and an awesome pull hitter who acted as a sparkplug for his team’s offense. Had the call to the Big Leagues come when Wilson was in his 20s I think his Hall of Fame argument would be back with legit big league stats. 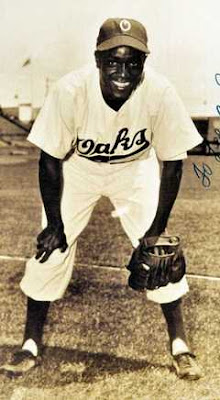 Now he will have to rely on the memories of those he played against. I would love to see Wilson get the call to Cooperstown while he is still around to make his acceptance speech. This card is immediately one of the cornerstones of my collection. It is NOT up for trade and I will treasure this awesome card and the stories it tells for years to come. For everything from the Roller Derby book to the crazy wrestling cards to all of the great Ginter cards to all of the stuff I posted here, I owe you a HUGE thanks Rod!!! If you have not yet become a follower of the Padrographs blog, I would suggest you fix that right now. You will see not only that he is a skilled writer, but a passionate fan, a great collector and trader and he has one of the coolest blog header logos out there… If a tee shirt exists with the Padrographs logo on it, I want it!!! Thanks SO MUCH Rod! Oh, if you didn't already figure it out, this was NOT A BIP... Before I sign off I must mention that the must read blog Play at the Plate is celebrating its one year birthday/blog-a -versary today. Be sure to wish him (it) a happy day! Go Rays! Troll out.
Posted by Collective Troll at 8:21 AM