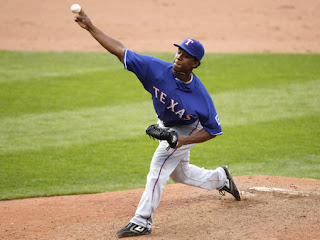 Well the Rangers did it. They ended the Yankees season and they are World Series bound for the first time in their history. A-Rod whiffed to end it. Fitting. As a baseball fan I am elated. As a blogger I am thrilled for the awesome Rangers bloggers out there who have been backing this team for so long. If you want a true Rangers fan celebration check out Spiff’s blog Texas Rangers Cards or Big D’s home Hey That’s Mine OR head on over to Play at the Plate. Actually I think there are a lot of bloggers that are pretty happy about this one. Yankee hatred tends to run rampant round here…
So congrats to Michael, Ian, Josh, Vlad, Nelson and the boys from Arlington! Now onto more unfinished business, my losing bet with Brian from Play at the Plate. 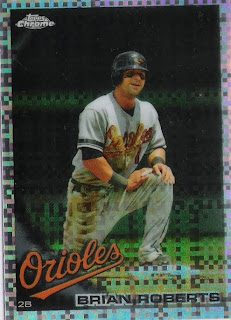 He had posted this Brian Roberts X-Fractor which I wanted so when we bet on the ALDS it was what I was hoping for. Well, the Rays lost and I lost the bet, but for some reason the card ended up in my mailbox a few days later AND it brought friends! Here is what your team losing in the playoffs can net you: 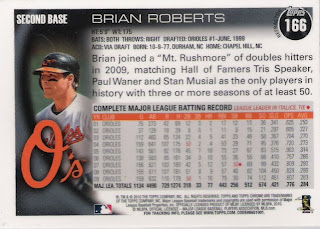 Of course, the Brian Roberts x-fractored shiny goodness which I am thrilled with. I do plan on bringing back my Brian Roberts Cards blog and I have a TON of new B-Rob cards to post (mostly from fellow B-Rob fan Ryan's Memorabilia, thanks dude!!!). Roberts remains my favorite current non-Ray (other than Jonny Gomes) but his back injury really took its toll on his season. He ended nicely however I thought. He played in only 59 games, but had 64 hits, 14 doubles, 4 homers and 12 steals... Not too shabby. . Of course that wasn't all I recieved in my concelation prize, not by a long shot.

Lets start with a trio of shiny BJ Upton refractors of all varieties. Very cool.
I love these cards because I love colored parallels and refractors. 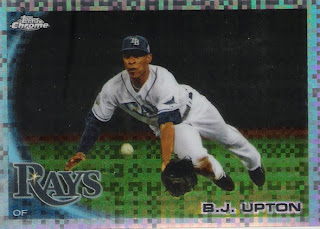 I also like this pic on this card. I am on the fence about Upton though. I never set out to collect him, but there are just so many cards of him! I know he has the potential to be a superstar, but he leaves us Rays fans waiting and waiting each year. 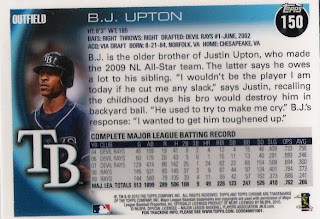 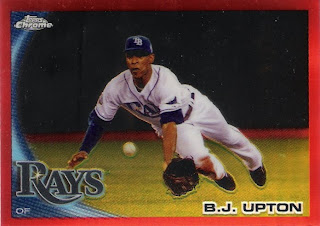 He included 1 more card in the package and this one really shocked me. This is another guy that I don’t really collect, but for different reasons. It is Evan Longoria and I don’t chase him because he is expensive. I own 1 autograph of Longo and 2 relics (both multiplayers). I had a few other premium cards, but they were all LOST a while back. This year Longoria set personal bests in batting average (.294), doubles (46) and steals (15) and started the All Star Game at third base. His power numbers and run production dropped a bit, but I really couldn’t think of anyone I would rather have manning third base on MY team. Still, Longo, like Upton, forgot his bat in the ALDS. He was 4 for 20 (.200) against Rangers pitching. Over his short career he is just 16 for 82 (.195) in the postseason. I recall seeing someone holding up a sign at Tropicana Field during game 5 which said “We showed up Evan, WHERE ARE YOU???”. Sad but true. Anyway, next year is a fresh season and all is forgiven and I was THRILLED to see this card – a 2010 Allen and Ginter jersey relic of the All Star third baseman. 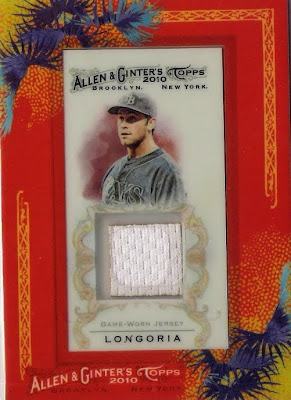 Thanks to blogger generosity I am nearly done with this set without buying a SINGLE pack, BUT this is my FIRST relic.

Thanks so MUCH Brian!!! I hope to lose a lot more bets with you in the very near future! I mean seriously, your team crushes the Yankees and I get a bunch of sweet cards too... Win win baby!

Go Rangers! Goodnight Yankees - you are gonna need to waste a couple hundred million more next year if you want to buy your way into the Series. Oh, as a trader FYI - those are the ONLY 2010 Chrome I have so far. I NEED the Carl Crawford Rainbow. Get in touch if you can help a Troll out... Oh, Shannon Stewart couldn't be reached for comment, but the Waxaholic has 2 great reasons to be a Rangers fan! Troll out.

Posted by Collective Troll at 3:35 PM