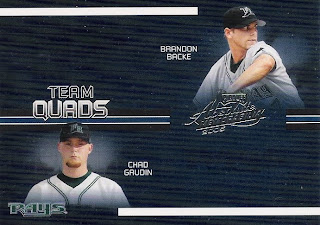 As promised, here is my latest trade with everyone's favorite Twins fan, Rhubarb Runner... The Runner has a super awesome local card shop and he is always shopping for just about everyone in the blog-o-sphere. His goal is to turn good deals into Twins cards he needs. This worked out great for me because I had just found a 2007 Glen Perkins autograph the same day he wrote me. He found 4 Rays cards at his shop and I needed 2 of them, so we agreed on the deal. Thing is, the stuff we agreed on was already pretty great, but the extras he threw in were AWESOME!

We will start with this Team Quad card from Playoff Absolute. Not to sound ungrateful, but I despise the design of Playoff cards. The blatant waste of space, the lack of information and stats and the tiny pictures and the serial numbering of cards that just don't seem that special. That said, I still chase them when they feature certain players and this quad includes Brandon Backe, Chad Gaudin, Toby Hall and Dewon Brazelton. 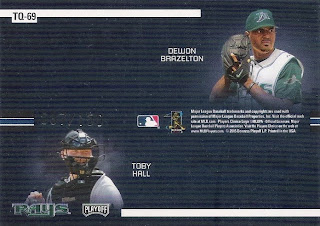 I collect Brazelton and therefore had to have this one. I swapped player collections with the Great Sports Name Hall of Fame not too long ago and snagged his rad Brazelton collection. I haven't posted it yet because I am not sure anyone would appreciate aside from myself and GSNHoF, but I will!

Next up is a card I sort of posted already, but wanted to put up again because it is really a neat card. It is Crowning Moment card #402 from 2005 Donruss Diamond Kings showing current Giant and former Devil Ray's first baseman Aubrey Huff. 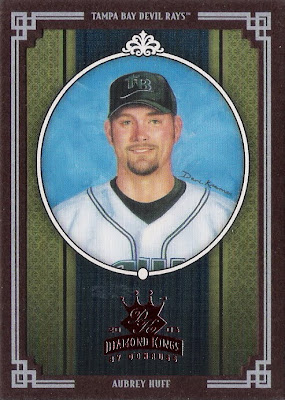 The reason I wanted to show this card again is that the rendition is truly amazing and I wanted to give the artist, Dave Kramer, a little love for it... Huff, by the way, is hitting .429 in the Series so far. I would say I am rooting for Huff to do well, but for his team to lose... By the way, I do NOT collect Huff. He had some success for the D-Rays, but I just wasn't a huge fan. Like all former D-Rays though, I have a page in the binder showing his 9 best cards. I upgrade whenever I can and this card made the cut.

Next up is the first surprise. From 2008 Upper Deck Documentary UPDATE. 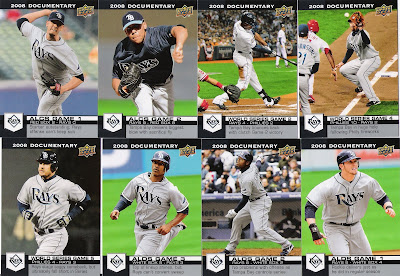 I didn't even realize there was an update, but I guess there is. All 8 cards are from the postseason. If you read the backs the Rays were. 500 over these 8 games. Ultimately they beat the White Sox and the Red Sox, but lost to the Phillies. Memories. When Documentary was on the shelves I thought it was a horrible, horrible set. Now, I desperately want to complete the 163 card set, PLUS the update version. 2008 was a magical year for the Rays and I would love to fill a binder with this. 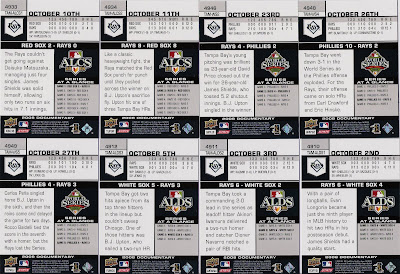 Its funny, but this year with Topps monopoly I find myself appreciating things that I never gave a second thought about before. I probably have at least 50 of these cards, so many trade packs have included 1 or 2, someday I will get them all together and into a proper binder.

Incidentally, a case of Ultra Pro pages is tops on my Christmas list!

Okay, back to the trade and the 2nd HUGE BONUS the Runner included... Another set I need to get all together and make a list of is 2009 Topps Update GOLD.

I am trying to build the gold parallel version of EVERY D-Rays Topps team set. I need many, so I haven't made a list. Cards trickle in here and there, but Rhubarb sent me 4! This was a total surprise and a HUGE bonus. I don't get to scratch 4 cards off of my imaginary list very often! They are #UH55 Ben Zobrist All Star, UH103 of Evan Longoria All Star, #UH272 of All Star Carlos Pena in the home run derby and #UH287 of Matt Joyce. Awesome!!! The final card I am going to show off was actually the cornerstone of the deal.

It turned out great that the throw in cards totally overshadowed it, but this one is still pretty rad...It is from 2007 Upper Deck Masterpieces, another set that I appreciate more and more as time goes on. This set was actually really cool then, but now that Masterpieces only lives on Beardy's blog, they are that much cooler!

This is a Captured on Canvas insert of Rays outfielder Rocco Baldelli. 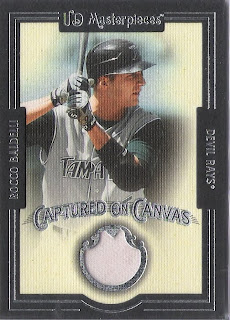 Opposite of Playoff, the design of this card is awesome! Great color, great use of space and a cool name. I don't really have too many Rocco Baldelli jersey cards. I decided that I need more. Rocco isn't my favorite, but I hold him in high enough regard that he gets multiple pages in the binder. This card is going right in.

Thanks so much for trading Rhubarb!!! I know we will deal again really soon! Thanks for reading and if you insist on sending me cards, I will def appreciate it, if those cards are gold, there will be even more appreciation...

Posted by Collective Troll at 2:27 AM