The problem with being a player collector is that if a card company makes it and puts your favorite players name on it - you HAVE to have it.

I collect Carl Crawford cards and I will chase any card that has his picture on it. Now I have a card that doesn't even have that. I bought this from an auction site. There was no photo available, BUT it was only 99 cents and low shipping, so I rolled the dice. This is what I ended up with. I have no one to blame but myself... 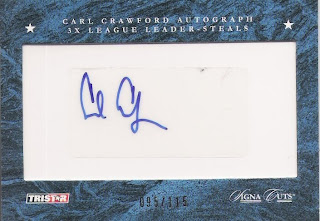 The card was released by Tri Star in 2008 as part of their Signa Cuts series. The card has a nice blue border surrounding an open white space in the center of the center. On the top of the border it says "Carl Crawford Autograph - 3X League Leader - Steals". Below that is a huge open white space and below on the border is a serial number (095/115) and the product name. The white open space is similar to an index card and on this index card is a sticker auto of my favorite player. If you look closely you can a little bit of red and black lint stuck underneath the sticker auto. Classy. Nowhere on the card do you find a photo or rendering of the subject. 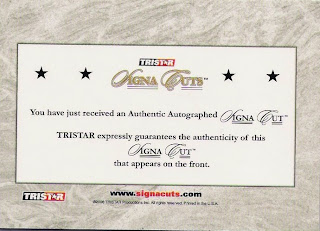 No stats, no team name and NOTHING on the back of the card. Straight up lame. I had always liked Tri Star's minor league products, but this...I STILL love this hobby. Go RA(Y)ngers! troll out.
Posted by Collective Troll at 2:21 PM