Plays at the Plate, Vintage Style!

Tonight the Rangers are going to stick the final nail in the Yankees coffin AND get to celebrate in front of the home crowd. I hope my buddy Brian from Play at the Plate has tickets and will be there to cheer the team on. The game starts at 7:30 PM Eastern. I am looking for the Rangers to start the power show early... In the meantime I am going to show off 3 Play at the Plate cards which will soon become part of the Play at the Plate Blog Collection. 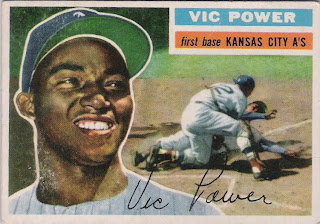 Starting with my current blog header pic showing Vic Power sliding into home plate on card #67 from 1956 Topps. A great base runner, Power once stole home twice in one game. He scored 91 runs in 1955 for the Athletics and made his first of 6 All Star appearances. He also switched to first base that year and would be fantastic at the position. From 1958 to 1964 he won 7 consecutive Rawlings Gold Glove Awards. 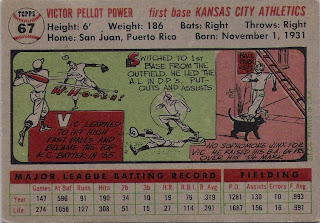 It probably could have been more, but the Award wasn't given out for each League until 1958 and Power was the dominant fielding first baseman in the AL.

Next is card #45 of Gus Zernial, Power's power hitting teammate on the KC A's. 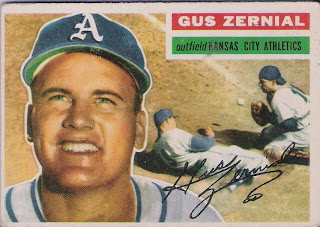 The Play at the Plate shows Ozark Ike beating the throw and sliding in safe at home. 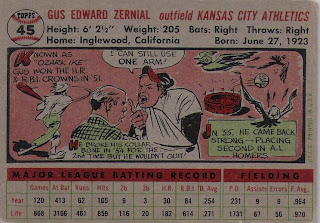 Zernial spent 11 seasons playing in the American League and finished in the top-10 in homers six times. In 1951 he paced the league in both homeruns and RBIs.

My third and final Play at the Plate card from 1956 Topps is card #197 of Philadelphia Phillies shortstop Granny Hamner. 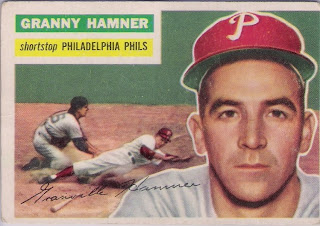 Hamner was a key member of the Phillies Whiz Kids team that won the National League Pennant in 1950. In the Phils loss to the Yankees Hamner batted .429 in the Series. He was a 3-time All Star and one of the defensive leaders of the Whiz Kids. He also brought some pop to the plate, especially when he topped 20 homers in 1953. 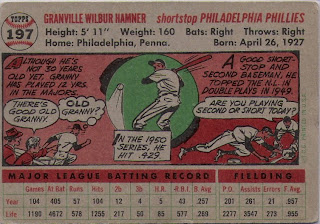 He held the record for homers by a shortstop for the Phillies which stood for over 50 years before Jimmy Rollins broke the mark in 2006. Brian, these are all yours for the claiming.
I love this game, I love this hobby! Go RANGERS! Beat them damn Yankees! For more 1956 Topps cards which don't show plays at the plate, click here.
Also please be sure to check out the New World Order takeover and giveaway over HERE. troll at the plate out.
Posted by Collective Troll at 1:54 PM