Bloggers Vote For the Hall of Fame! A CONTEST BABY!!!

So, back on July 26th when the newest members of the National Baseball Hall of Fame received their proper induction in Cooperstown, New York, I was obviously in some type of a pack (crack) ripping haze and I completely out on writing anything about it. HOF inductions are one of my favorite things and this years crop which included Joe Gordon, Jim Rice and the “Greatest Basestealer Ever” Rickey Henderson was a pretty good one. There were a few guys on the ballot that I feel got the snub, but that is part of what makes it fun and keeps you interested. I had been planning on having a Hall of Fame related contest and I still am. Better late than never, right? My last contest was All Star themed and I gave away some relic cards, all featuring players who were All Stars at some point in their careers. This contest will be HOF-themed and the give away will all feature all Hall of Fame players (guys who played in many AS games). It will be a winner takes all deal. Every autograph, card, magazine, postcard, etc. that is scanned on this post is a part of the prize. The winner will get a flat rate Priority mailer filled with all of these goodies and a few bonuses, too. The rule number one in this contest is that you must follow this blog to enter. You can’t enter and then follow some day; you must follow it first and then enter. I will keep the contest open until August 30, 2009 to allow as many folks as possible to enter. It is limited to one entry per follower, but if you post this contest on your own blog, I will give you a bonus entry, but you have to let me know. All entries will be typed on a piece of paper, cut and folded by me, placed into a hat and drawn by the lovely (and impartial) Esther Gin N Juice.

She will be blindfolded, there will be no shenanigans! The key prizes here are probably the autographs. I have had all 3 of these since the mid 1980s; they were all signed in person at various card shows in Connecticut. My allowance afforded me the autograph ticket, but rarely bought the 8X10, hence the index cards. To keep this post shorter than most, I will trust that you, the loyal Troll reader, will research these amazing players on your own. First is:
George Kell,

He was in the HOF class of 1970. The winner will receive at least two addtional (non HOF) index card autos.
This is the only carry over from the last contest.

There will probably be others, but I am tired of scanning. There is other stuff in the prize envelope, too. A few HOF postcard plaques,

a Sports Illustrated from 7/28/97 Proclaiming Tony Gwynn as “The Best Hitter Since Ted Williams”. 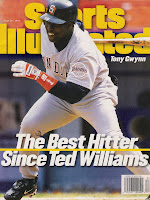 Also a Sporting News HOF program from 1988 featuring Willie Stargell on the cover.

To enter you have to become a voter for the Hall of Fame election, Blogosphere version… Let me explain, and then I will make the first comment slash entry as a sample…
1. You must follow the blog to enter.
2. To enter, you must choose your selections for the Hall of Fame, Class of 2010. You may select up to 5 players. The first ballot players will be listed below.
3. The winner of the contest will be drawn from a hat on September 1, 2009.
4. The votes for the Hall of Fame will be tallied up and the top-five vote getters will be declared Collective Troll Hall of Famers Class of 2009 and a half!
The following players will be on the ballot for the first time in 2010: Roberto Alomar, Barry Larkin, Robin Ventura, Edgar Martinez, Fred McGriff, Kevin Appier, Ellis Burks, Ray Lankford, Pat Hentgen, Todd Zeile, Eric Karros, Mark McLemore, Andres Galarraga, Fernando Vina, Mike Jackson, Shane Reynolds, Dave Burba, David Segui, Andy Ashby.
Voters can choose anyone who meets the retired eligibility. Banned or suspended players can receive votes if you so choose, so yes, you may vote for Pete Rose. You can pick players off that ballot or go old school veteran’s committee style with players like Gil Hodges, Allie Reynolds, Mickey Vernon, Joe Torre, etc. That’s it. On the comment, list your name and location. Your favorite player OR team. Your 5 votes for the Hall of Fame and anything you wanna say. If this post gets clogged with too many comments (and I hope it does!) I will start a fresh post that you may enter on. Remember, the contest runs till 8-30-2009. It is winner take all. The winner will receive everything listed on this post and then some more stuff. You must follow this blog to enter. If you post a link on your own blog, you get a bonus entry. Oh, and well you are here, please check out this blog, perhaps read some of my posts, that would be cool and would build up some good contest Karma. Good luck. Oh, as another bonus, the first 10 people who vote (other than me) will get a bonus chance (on top of the link bonus) so get typing! Oh, there is one more free contest that you are not gonna wanna miss out now, Allen and Ginter madness and giveaways, tell him the Troll sent you! http://cardcache.blogspot.com/2009/08/2009-allen-ginter-giveaway-complete.html#comments Go Rays! Troll out.
Posted by Collective Troll at 1:57 PM