Swapper Ginters (and Rays) With McCann Can Triple 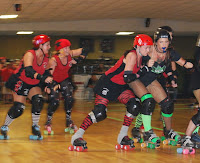 Tomorrow is all about Roller Derby, the Bombshells are entertaining the Gainesville Roller Rebels in what was supposed to be the final bout of the season, but popular demand has extended it by a couple of games… Glyph (G-ville announcer) will come down and help me with the call of the bout. Today, Bombshell superstar and super-wife, Ms. Esther Gin N Juice is out at the annual Women’s Equity Celebration conference and luncheon. After that she will take her girl power to the Honda dealership to try and work out a cash for clunkers deal for Blanca before the program ends. That said, I am home alone and therefore have been posting like crazy. I had to give Kazmir some positive words after a great night on the mound yesterday and I have a ton of trades to catch up on.
My subject for now will be Sarah AKA McCann Can Triple at the Rookie (baseball) Card Collector blog. She had ripped a fair amount of Ginter before giving up on it. I had pulled a triple swatch card of Brian McCann and we worked out a deal. She was worried because she hadn’t done any big trades yet. If I could offer some advice-pack the individual cards a little better. Put penny sleeves on the first and last cards and put them in team set bags. A few of the cards ended up with pretty rounded corners, but since I never plan on selling my Rays cards or my Ginter set, it’s not that big a deal… On to the cards…
There was good number of National Prides, SPs and singles in there. I didn’t get a count, but I think she helped with about 50 cards

Number 252 of Lastings Milledge is also included. He is wearing a Nats uniform, but was traded to the Pirates for Nyjer Morgan in June. Milledge is wearing number 85 (for his year of birth) and is the only big leaguer that I can recall to wear that number. In 1997 Milledge (who is from Bradenton where I live) led the Manatee East All Stars to the Little League World Series. I interviewed him back then (he was 11) and it was an unusual experience trying to do a serious interview with someone so young. When he was 16 Baseball America named him the best 16 year old prospect in the country and the Mets drafted him with the 12th overall pick in the 2003 draft. Since then he has been riddled with injuries and hasn’t come close to meeting expectations, but the dude CAN HIT. Card #250 shows last remaining 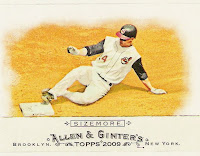 Indian Grady Sizemore in a bear skin rug pose. Next is card 213 of

Olympic discus thrower Stephanie Brown Trifton. She won Gold for the US in Beijing and she is 6 foot freaking 4! I wonder if she plays derby…

Card #18 is of Clyde Parris who played Negro League ball starting in 1946, in the pic he is shown wearing a Cerveza Balboa jersey-I would play for that team! The last Ginter I will show is card 25

of everyone’s favorite third baseman Evan Longoria. She sent me quite a few Longos, thanks! A lot of people don’t wanna give up Longo or Price cards which can sometimes make being a team collector difficult. Longo squinting, like he is trying hard to read the bottom line on the eye exam chart or maybe trying to focus on his own Allen and Ginter want list, who knows. On to the rest of the cards… Last week I posted a trade from the Night Owl (hoo) sent over some OPC cards that I needed for the Rays team set. I put a list of what I still needed and Sarah knocked it down by two cards with these two Gabes.

Gross with a black border and Kapler in white. A few months ago someone had sent me some of the black 2009 Topps cards from Wal Mart and I loved them. I haven’t seen any since, until today. I now own 22 Longo/Price, 204 Andy Sonnanstine and 296 of high flying Reid Brignac.

She left a note that she was sorry that she didn’t have too many Bartletts or Crawfords, but she did score big with this

2008 Upper Deck Jason Bartlett numbered 666 which is new to me. She scored with a Joe Maddon

card that I somehow didn’t have yet (I really thought I had the market cornered on ’07 Topps) of him trotting on field and not in very good focus. She also hooked up some older cards and ex-Rays, too. 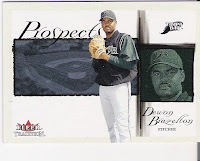 Dewon Brazleton was a favorite of mine, still is actually. He was the Devil Rays opening day starter in 2005 and he took a no-hitter further into a game than any Tampa Bay pitcher in their history. You can find him pitching for the Atlantic League’s Camden Riversharks.

I really like the Topps 50th Anniversary All Rookie Team cards, I just have had bad luck pulling anyone good, but Sarah helped me with card AR82 of current Red Sox outfielder Rocco Baldelli. I will close this trade post out with the oldest card in the package, a

2002 Donruss (card 104) of former slugger Greg Vaughn. GV hit 50 homers for the Reds in 1999 and had over 350 for his career which included 3 seasons with Tampa Bay. Last year was his first year of Hall of Fame eligibility and he fell off the ballot. He was one of 3 players to not receive a single vote from the writers, the others being Ron Gant and Dan Pleasac. His cousin Mo Vaughn received 6 votes. That is the trade; I am a whole lot closer to filling up my binder of Allen and Ginter thanks to Sarah. Go check out her blog and help her out. I think she is working on Upper Deck X and she will gladly give homes to your Chipper and McCann cards. The Rays are locked up in a 3 run tie game with the Rangers. I am at home, watching on TV because I am tapped out in the cash flow department. Don’t forget to enter the HOF contest and check out my want list pages which are all updated. http://collectivetroll.webs.com/ Go Rays! Keep on trading with me! Go Bombshells! Troll out.
Posted by Collective Troll at 9:48 PM