An EJ from Adam E

I root for Elliot Johnson to make the Rays out of spring training every year… He batted .400+ in 2008 during the spring, .300+ last year. This year he is batting .250 in 18 games which tells me he is ready for the big leagues! I don’t like posting cards that I can’t hold and look at while I post them, but I opted to bicycle to work today and I couldn’t bring both cards and my computer, so the cards stayed at home… 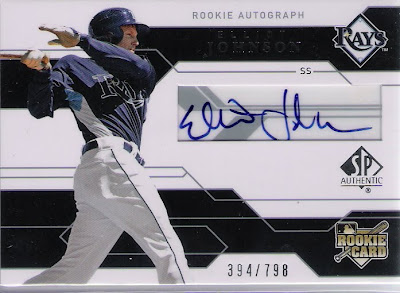 This EJ autograph came to my collection from Adam E of Thoughts and Sox. Yes, it is a cut sig of a current player, but it looks good here. It gives the card an added dimensionality to it. EJ just celebrated his 26th birthday. He probably is still shy of being a superstar in the big leagues, but I think he is ready to begin his career as a major league, role playing, utility guy who has the ability to get the big late inning hit and play the role of hero. A huge thanks to Adam E. for this gem. I am gonna keep on writing short posts to show off one card at a time… On a different topic, there is less than an hour to vote for the next player I collect. There is currently 3 players tied. We need to break that tie! Go Rays! troll out.
Posted by Collective Troll at 7:25 PM