MERRY CHRISTMAS TO ALL!!!!!!!!!!! Plus Birthday Wishes and the Collective Troll Card of the Day

Merry Christmas Trollites!!! Merry Christmas Blog-O-Sphere!!!!! Happy Birthday to Ken of the Field of Cards blog and happy birthday to the Guy for whom most of us have the day off to spend with our families…I have never touched on religion on this blog and I don’t plan to start here, so I will stick with what I know-baseball and baseball cards and I will wish a happy birthday to Hall of Fame second baseman Nellie Fox. He would have been 82 this year. Sadly he passed away in 1975, 12 years before the Veterans Committee elected him to the National Baseball Hall of Fame in 1997. This year was the 50th Anniversary of Nellie Fox’s finest year in major league baseball. 1959 belonged to Nellie Fox. He started both games of the 1959 All Star game. His team, the Chicago White Sox, won the American League flag and went to the World Series. Unfortunately the Dodgers rained on his parade and the Dodgers took the Series in 6 games, but Fox had a .375 batting average for the Series with 3 doubles. He also finished 2nd in hits and 4th in batting average that year. He won his second Gold Glove and took home the 1959 American League MVP Honors. Like I said, it was Nellie Fox’s year. This is the 50th Anniversary of that year, that Award and today is the 82nd Anniversary of his birth. Seems like high-time to make his 1960 Topps card #100 the Collective Troll Card of the Day, right? Nellie Fox wasn’t a power hitter, but he was a great hitter. He batted at the top of the order and he hit like crazy, nobody could lace a base hit like Fox. He led the League in singles 8 times over his career. He hit 2161 over his career which is 25th best All Time. He is 66th All Time on the hits list with 2663, which gives you an idea of how often he got on base, but how seldom he went for extra bases. He set the table better than anyone of that era and scored more often than not. He scored 1279 times over his career. I was happy when Fox finally went into the Hall. I wish it happened during his lifetime, but he epitomized the dedicated and gritty gamer-the scrappy middle infielder that is timeless and goes beyond steroids and juiced balls. Over his career he won 3 Gold Glove awards and played in 15 All Star games. 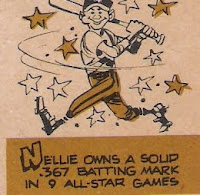 Like I said, it was his year. Its cliché to say, I know, but Nellie Fox played the game the way it was meant to be played. When current players are referred to as throwbacks-they are being compared to Nellie Fox. Happy Birthday Mister Fox!!! Happy Birthday Ken! Merry Christmas to the entire blog-o-sphere!!! From Sally the Cat, Emma the Dog, my sons Zadeh and Darvey, my wife (the legendary) Esther Gin N Juice and myself-from our family to yours MERRY CHRISTMAS!!!!!!!!!!!! Blogging with y’all this past year has been a wonderful experience. I have “met” so many wonderful people and it has been a fantastic ride. Thanks to everyone who has read, written or traded with me this year and Merry Christmas once again…Oh, by the way... I know that "Blow Out the Candles" is not my thing-be sure to check out Can't Have Too Many Cards who does the birthday wishes right! Happy Holidays from the Troll and a HUGE thank you to each and every person who has stumbled across this blog-I’m out!
Posted by Collective Troll at 3:01 AM

Labels: 1960 Topps Card 100, Can't Have Too Many Cards blog, Collective Troll Card of the Day, Ken from Field of Cards, Merry Christmas to all, Nellie Fox